Patheos Explore the world's faith through different perspectives on religion and spirituality! Patheos has the views of the prevalent religions and spiritualities of the world.
This interview is being serialised over several days. So far I have published part one, which focused on personal issues, and part two, in which we discussed Systematic Theology. In part three, we explored Grudem’s charge that feminism inevitably leads to a denial of Scripture’s authority. Part four honed in on the “trajectory” arguments used on both sides of this debate. In part five, we looked at the issue of women addressing church congregations. Part six examined John Piper’s accusation of Steve Chalke over the atonement. In part seven, Dr. Grudem discussed two areas where we perhaps can agree to disagree – the charismatic and baptism. Part eight focused on Dr. Grudem’s predictions concerning the future of the Church. This part concludes the interview. It addresses theological blind spots and an issue where there is clear disagreement between me and my theological hero.
The interview is summarised in my post Dr Wayne Grudem Interview – Highlights and Reflections.
I will shortly be posting a “highlights and personal reflections” round-up post, and have a couple of other things I want to say before I go on a Christmas break – so keep coming back!
Please join me in thanking Dr. Grudem for the time he has spent on this interview – I have enjoyed having him around! I hope you have, too.

Adrian
At the end of the day, with all these theological arguments, to me the most critical question boils down to “Can we accept the simple clear message of the Bible on this subject?” Do you agree that this is the most important question, and also, where do many go wrong?

Wayne
I tend to see many questions that way, and I hope others see them that way as well. The problem is that people on the other side of these questions wonder why I do not accept “the simple clear message of the Bible” on the subject at hand! And so we discuss these things with one another in Christian love.

But I do have to say that the egalitarian position is anything but obvious from the text of the Bible. It was hardly held by anyone (except the Quakers) for over 1800 years, as I explain in detail in my earlier book, Evangelical Feminism and Biblical Truth (2004).

Adrian
I do think that a humble attitude towards the Bible is perhaps the most important thing we should strive to have. Do you agree, however, that there are probably areas for many, if not all, of us where we are “blind” to the simple message of the Bible and allow either our traditions or our human reasoning to shape our teaching?

Wayne
Yes, I’m sure there are areas for all of us where we have made mistakes. I just wish I knew where they were! James has a good caution for us: “Not many of you should become teachers, my brothers, for you know that we who teach will be judged with greater strictness. For we all stumble in many ways, and if anyone does not stumble in what he says, he is a perfect man, able also to bridle his whole body” (James 3:1-2).

Adrian
I recently heard a respected Bible teacher criticise one chapter of your Systematic Theology and essentially accuse it of having just such a blind spot. He said that throughout the rest of the book you were constantly simply asking – “What do the verses say?” – but that on the subject of the structure of the church, that seemed to suddenly change and you were merely describing, “Well, this is what the Methodists do . . . this is what the Anglicans do . . .” How would you answer this accusation, and do you believe that the New Testament does have a clear model for church government that could be applied today?

Wayne
I’m not sure that he took account of the whole chapter. I did describe what various denominations have done about church government in the history of the church because I wanted students to understand how different denominations govern themselves, and how they’ve reached different conclusions about this question. But I also argued for my own understanding of a biblical pattern for church government, which is plural local elders governing a church, with the pastor or senior pastor being one of those elders. That seems to me to be the pattern in several verses of Scripture where we have indications about church government. James writes to all the churches in the Roman Empire at that time and he expects that there will be “elders” who will pray for the sick in every church (James 5:14). Paul appointed “elders” (plural) in “every church” (Acts 14:23), and he wants Titus to appoint “elders” in “every town” in Crete (Titus 1:5). There is a consistent pattern of plural elders governing every church.

Adrian
This Bible teacher went on to explain in his talk what he felt was the biblical model for the church – independent local congregations led by teams of elders who were appointed and helped by apostles. He argued we should have an identical structure today. Such a view separates the gift of Scripture writing and apostleship – after all, many of the original apostles didn’t write any Scripture at all, so if that was their only job they weren’t very efficient at it! I guess it could be argued that such a view does to apostles what you did to prophecy in your book – i.e. it removes their infallibility and instead makes them something that serves the local church and that, as per Ephesians 4, should be expected to persist until the church is perfect. What would your response be to such an argument?

There is no record of the apostles appointing successor “apostles” to fill in for them when they were gone. Peter sends not a replacement apostle, but an epistle to the churches of Asia Minor, telling them he is doing this so that “after my departure you may be able at any time to recall these things” (2 Peter 1:15). Paul tells the Ephesian elders that “after my departure fierce wolves will come in among you, not sparing the flock,” but he does not tell them to be subject to some new apostles whom he will send, but tells them to look to Scripture: “And now I commend you to God and to the word of his grace, which is able to build you up and to give you the inheritance among all those who are sanctified” (Acts 20:32).

And I do think that the apostles had absolute authority to speak words of God and govern the churches as Christ’s direct representatives, a kind of authority that no human being has today. (I argue this in the chapter on church government in Systematic Theology).

I have found it interesting to be in an “independent Bible church” – for the first time in my life – during the last five years. I love the church and think it does many things very well. But there is frequent talk of forming an “association” with other like-minded churches, or at least the other churches we have planted. And I do see some benefits that come from association with other churches in a denomination, benefits that my own church now does not share in because it is independent. So it seems to me that churches over time just seem to have a tendency to form networks or association with other like-minded churches, and these are the beginnings of denominations. I just think there is quite a bit of freedom in the Bible in this regard, and various systems seem to work very well.

However, I think I also argue in Systematic Theology that it is always wise to have a governing structure where the highest governing offices in the church and the highest positions of influence are open to lay people as well as ordained people. The denominations where only clergy have the highest of authority seem to be the ones that are never able to be brought back once they drift into liberalism because the ordinary lay people who have common sense and are reading their Bibles every day don’t have any way to regain control of a denomination that has gone astray if it has that kind of structure.

Adrian
This has turned into quite a long interview. Before I let you go, is there anything else you would like to say to my readers – perhaps one last reason why they should go and get the book?

Wayne
One last reason why they should go and get the book? I think the book, Evangelical Feminism: A New Path to Liberalism? will help readers to know the danger signs and the arguments to avoid when evangelical feminists try to take their churches down the path to liberalism. 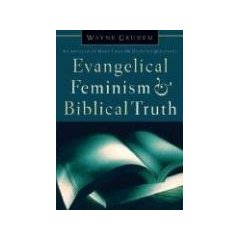 And then for much fuller documentation and argument, readers may also want to buy the 856-page comprehensive reference book I published two years ago on this subject, Evangelical Feminism and Biblical Truth (Multnomah and IVP-UK). That book answers in some detail all of the 118 evangelical feminist arguments that I found in my research.

Finally, just in case someone thinks that an 856-page reference work is too long, Multnomah has published (just last month) a condensed version of that huge book that is a popular overview of the whole controversy. It’s called Countering the Claims of Evangelical Feminism. It’s just 320 pages – a quick read. So there you have three books on this topic, all in one interview. (And I hope I’ve finished writing on this topic for the rest of my life!)

Adrian
Thank you so much for taking the time out of your busy schedule to join us, Dr. Grudem!

Wayne
Thank you, Adrian, for your excellent ministry, and for allowing me the privilege of participating in this dialog.

December 16, 2006
INTERVIEW - Wayne Grudem, Part Eight - What Does the Future Hold for the Church?
Next Post

December 17, 2006 Are You a Theologian Looking for a New Challenge?
Browse Our Archives
get the latest from
Adrian Warnock
Sign up for our newsletter
POPULAR AT PATHEOS Evangelical
1

Evangelical
Billy Graham dies at 99, the most influential...
Adrian Warnock

Civil Rights as the Fulfillment of the American...
Some in the Black Lives Matter protests are condemning America's founding. But...
view all Evangelical blogs
Copyright 2008-2020, Patheos. All rights reserved.