The Warnie Awards started as a bit of fun, but I understand that for some they are a sought-after piece of blogging recognition. Today, I will award several more blogs a Warnie. As a result their headlines appear in a box in my side bar so there are even more reasons for you to come back here – even it if is just to keep track of what other Christian bloggers are saying. If it has been a while since you visited, you may want to click “Read More” to see more than just the last 10 posts. I should also say, that if you use your own feed reader the Warnies can be read from the following rss feed.

It may seem a long time ago now, but this blog really did exist before I started my atonement series. Believe it or not my atonement series is now drawing close to a conclusion, and there will anyway be a pause for most of next week for a new interview.

In fact, my previous long-running series was on the subject of preaching. People asked then, as they ask now “Will he ever speak about anything else?” My first award today goes to a blog which focuses on preaching all the time. It is a fantastic resource, and so please pop over to Expository Thoughts and congratulate them on their warnie.

The news in the Christian blogsophere of the last couple of months has been the wholesale arrival of some significant reformed ministries. Oddly their blogs haven’t gathered the attention amongst other bloggers that they ought to in my humble opinion. So, because I think these people need to be listened to more than me, are a few of them that I think deserve Warnies.

First up is Mark Dever’s new group blog. Although it has only just begun, I am sure that the content is going to be every bit as helpful as everything else Mark writes. So, in a very early award, the 9 Marks Blog receives its Warnie today.

Two more group blogs feature in todays Warnies – Reformation 21 and Desiring God Blog. The quality of postings at each of these blogs over time is so high that how can I do anything else but grant them their own Warnie Awards?

Sam Storms Blog has also begun rather recently. I think Sam’s writings are well worth a second look, so I am glad to award him a Warnie today.

A disciple of Mark Dever, Thabiti Anyabwile has fairly burst onto the reformed stage this year with two books to his name and an invitation to preach at the next Together For the Gospel. His blog Pure Church is becoming a regular read of mine and is full of helpful and honest material. Not exclusively a theoblogian, Thiabiti shares his own struggles and is as open and hence engaging as any Christian blogger out there. So, please enjoy your Warnie, Thabiti, you deserve it!

The final Warnie of today goes to the founder of the family of churches I am a part of. Many thousands of Christians owe God an incredible debt of gratitude for what he has graciously accomplished through Terry Virgo. Terry’s boldness in declaring decades ago that there was a different way to do church has led directly to around 500 vibrant churches within Newfrontiers and he has been a significant influence on many more in other streams. If you haven’t heard any of his preaching you really must remedy that as soon as possible. He has taken to blogging like a duck to water, and I find myself linking to many of his posts. Terry Virgo’s blog receives the final Warnie award of today, and I am thrilled to be able to tell you that from Monday I will be serialising an interview with Terry here on my blog. So come back Monday and I hope you enjoy the interview as much as I did!

Expository Thoughts have responded to their Warnie as follows –

“Today I received notice from Adrain Warnock that we are now the recipients of another major blog award…the “Warnie.” On some days Dr. Adrian Warnock seems to be the only gentleman left in Britain who still believes in penal substitution and a lot of other things that we think are important. He loves expository preaching as much as we do and has done his own to uphold the need for preaching amongst his faithful blog readers. So on behalf of the fellows here at Expository Thoughts and our reader(s) we gladly appreciate Adrian’s notice and encouragement to us. May the Lord increase your bandwidth and may your blog posts flow like Cadbury chocolate.”

June 21, 2007
The Atonement - Is Penal Substitution the Only Thing That Happened at the Cross?
Next Post

June 23, 2007 Is the Cross a Legal Fiction? No, Because the Resurrection Changes Us
Browse Our Archives
get the latest from
Adrian Warnock
Sign up for our newsletter
POPULAR AT PATHEOS Evangelical
1 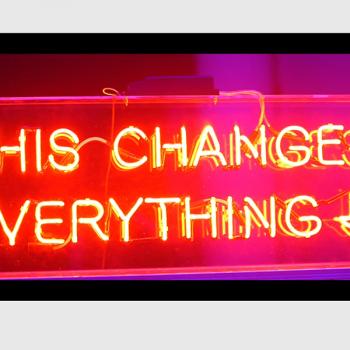