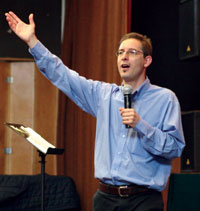 Lex is a good friend of mine and is well-known in Newfrontiers circles as a biblically sound and enthusiastic evangelist who has recently started posting very helpful notes on Facebook. I have his permission to reproduce the following Review of Positioning Yourself to Receive Healing by Doug Jones in its entirety here.

If you like it, then feel free to deluge him with Facebook messages telling him how much you want to read a blog by him since, for me, this is really a blog post, not merely a Facebook note, and it certainly demands a wider readership. Here, then, is Lex on healing . . .

One of the keys to the success of the Front Edge Conferences in the UK and elsewhere has been the emphasis on healing, both in terms of teaching (on the Saturday) and the opportunity for healing prayer (primarily on the Sundays in the church services). Obviously, the testimonies of healing that are given at such times are very encouraging.

As I do teach on this subject and am beginning to write on it, I thought it would be helpful to read not only biography but also teaching on healing. And I want to grapple with both scholarly and popular texts on the issue.

This short book (109 pages) by Doug Jones published by Faith Library Publications does come from the ‘Faith’ stable and seems to be a fair representation of their position (the author graduated from Rhema’s Bible Training Centre and was Director of Kenneth Hagin Ministries’ Healing School). There are some very good things here, some great reminders and exhortations to trust God, as well as some points I would see differently.

He is clearly positive about the medical profession (which is good to hear) and advises that anyone suffering goes to a physician early to get an accurate diagnosis and treatment. ‘Some see receiving medical attention as a lack of faith. How far from the truth they are.’ (p. 2)

He’s building an argument to help the reader trust God for healing, based on Mark 11:24: ‘Therefore I say unto you, What things soever ye desire, when ye pray, believe that ye receive them, and ye shall have them.’ (He uses the King James translation of 1611 throughout.)

To help us get to the place where we genuinely believe we receive when we pray he seeks to build faith by the following progression:

I must admit there are some tremendous insights and encouragements in these points. He does make it clear that ‘laying on of hands’ is only one means of receiving healing. Interestingly, when he comes to the cross he doesn’t attempt to build a past-tense healing argument for believers (i.e., you were healed at the cross, therefore you already have been healed, you just need to realise it). Rather, when he speaks of the cross he speaks in terms of provision for both salvation and including healing, and thus healing is a benefit of the sacrifice that Jesus made. This seems closer to our understanding that all the blessings or benefits of God’s grace are made possible by the cross.

While I am free to declare that it is God’s will to heal, I find it difficult to make a statement such as ‘It is God’s will to heal all’ probably because it sounds like an absolute declaration or claim. But clearly these guys are standing up in healing meetings and saying such things. I don’t want to be restricted by previous experience but I also want to consider the pastoral implications of all that we teach.

If you look at Jesus in the gospels it is impossible to say that He ever said ‘No’ to a person coming for healing. He certainly wanted to heal everyone who came to Him for healing. But in our own churches’ experience certainly some have not been healed and some have died of their condition. We are learning. And we are conscious of the fact that the rule and reign of God is breaking in but is not yet fully realised as it will be at the second coming of Christ (see ‘The Presence of the Future’ by Eldon Ladd).

Also, we must concede the point, that some have made, that while we do know the revealed will of God, we don’t know all the heart and purpose of God (sometimes referred to as the secret will of God).

But I would encourage folk to examine the Scriptures and I would certainly feel comfortable with someone coming to the conclusion that, based on their examination of Scripture, it is God’s will to heal, and that that includes them.

The main problem of the book, and the most shocking one came towards the end – when he deals with the actual moment of receiving prayer. And this helped me to understand why some who come forward for prayer seem reluctant to really examine whether or not they have been healed. It could also explain how some folk do seem comfortable making absolute claims in respect of healing.

At the point of receiving he emphasises ‘believing you have received’ in this way. He makes a distinction between God’s healing power being given (separate item) and a healing manifestation (separate item). I was utterly shocked to read this. In other words, he argues that, because it is God’s will to heal you (in fact, all) you do receive healing power – no question about it – when hands are laid on you, but you don’t receive a healing manifestation. In fact, you’re not to expect you will actually be ‘manifestly’ healed at the time of prayer!

This came as a real surprise! Everything in his argument has been built up to this moment but then the person is NOT to expect to be actually healed – only that ‘healing power’ is given. So he writes: ‘The very fact that Jesus tells us to believe that we receive informs us clearly that when we pray we will not receive an instant manifestation.’ (p. 88) Again, ‘This indicates that there is going to be a period of time between the time we pray and the time it manifests that we are going to have to walk by what we believe and not by what we see.’ (p. 88)

And thus, he states, they can make a bold confession of healing which is not based on what the recipient of prayer sees or feels. In fact, he seems to be discouraging an expectation that we might see any ‘healing manifestation’.

I can’t imagine anything more different from the gospels or Acts. This suggested distinction does not present itself to us in the New Testament. In the New Testament, when they were healed they were actually healed! The blind really saw, the deaf heard and the lame walked. The crowds truly saw ‘manifest’ healings at that moment – and glorified God!

And, while we acknowledge we are growing in faith, that’s what we’re shooting for at Front Edge and in special healing guest services! But the author holds his position consistently, even suggesting that there were instances in the gospels where those who were ministered to by Jesus were not actually ‘manifestly’ healed! I quote: ‘What they were given was healing power. It did not say that they were
given healing manifestations. And yet, isn’t that what most are believing that they are going to receive when they are prayed for in healing lines today?’ (p. 98) (Of course, the answer to this is to ask why the crowds were amazed, praised God and said things like ‘We have seen remarkable things today!’ See Luke 5:26.)

This position explains why some ‘claim’ healing when they are clearly not yet healed. But I don’t want folk to come to a meeting where healing prayer is offered and to go away trying to convince themselves that they’re healed when they’re not. I certainly don’t want that to be our expectation! Rather, let’s actually step out vulnerably in faith and believe God for healing! I don’t want people to go away suffering while telling themselves they are healed.

I would prefer to see the churches step out in real faith for real healings in the moment, even though we struggle with the pastoral tension of not seeing everyone healed. And if some are healed and some aren’t I would rather shake my head and confess, ‘I don’t know the reason but I do know that God is good!’ and encourage folk to keep asking, keep seeking and keep knocking; to pray and never give up!

I remember the first time I encountered this up close. It was in the USA and I had a word for someone with a sore hand. A young man came forward and we prayed together. Afterwards I asked him how he was. He said, ‘I’m healed!’ I said, ‘Wow! That’s great. So how does it feel now when you move it?’ He then attempted to move his hand around and winced with pain.
I said, ‘Listen, you are not healed! So let’s not do that. Let’s actually trust God right now for healing. How about that?’ He looked at me as though I was bringing some brand new teaching. We prayed once more and then I asked him again. He was immediately freed from all the pain symptoms and went off running to his friends to show them and tell them. After awhile I managed to get him back to the front where he was able to lift the microphone stand and share with the whole audience how he had been in terrible pain, unable to lift a mug of coffee, and pointing to individuals who had known his condition and joyfully showing off his new freedom! It was really great, but it also taught me a good lesson about faith.

All the verses that Mr. Jones quotes are wonderful. The promises are true. The reality is that God does give healing power. I agree. But healing power heals. And most often when that power is given it does its work physically then and there, so the person knows. We don’t need to defer things as our starting point. Rather, let’s believe God now.

And also, let’s allow for the fact that we are not yet fully accessing all the power that we need, and that our people need. We hunger for more. We’re still learning. We can allow people to come back and ask again and again until they receive or until God redirects. We know God’s heart is good and so we keep seeking Him to have mercy and touch those who are hurting.

So don’t give up! Keep trusting Him for more!

— Reproduced with permission from Lex Loizides.

September 3, 2008
Dare to Ask God for Success
Next Post

Experiences of an Evangelical Theologian 6
Roger E. Olson
Books by This Author Books by Adrian Warnock