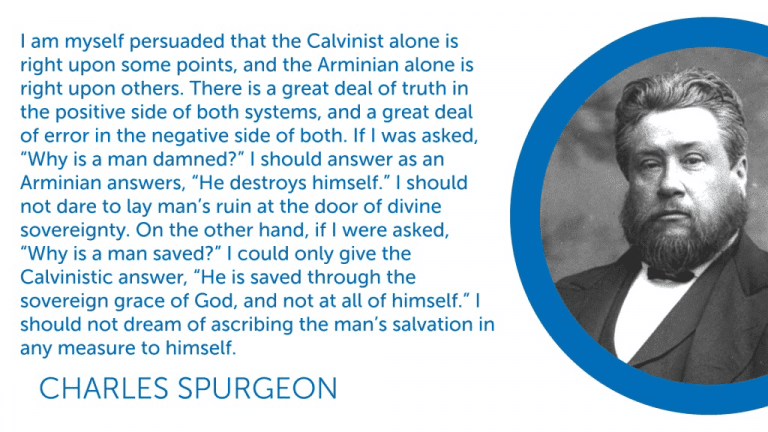 I found the following quote initially on Solo Christo , but thanks to Logos Bible Software I was able to find more context for it. It turns out that on some matters Spurgeon was not the rabid Calvinist some people think him to be:

There has long been a great doctrinal discussion between the Calvinists and the Arminians upon many important points. I am myself persuaded that the Calvinist alone is right upon some points, and the Arminian alone is right upon others. There is a great deal of truth in the positive side of both systems, and a great deal of error in the negative side of both. If I was asked, “Why is a man damned?” I should answer as an Arminian answers, “He destroys himself.” I should not dare to lay man’s ruin at the door of divine sovereignty. On the other hand, if I were asked, “Why is a man saved?” I could only give the Calvinistic answer, “He is saved through the sovereign grace of God, and not at all of himself.” I should not dream of ascribing the man’s salvation in any measure to himself.

I have not found, as a matter of fact, that any Christian people care seriously to quarrel with a ministry which contains these two truths in fair proportions. I find them kicking at the inferences which are supposed to follow from one or the other of them, and sometimes needlessly crying to have them “reconciled;” but the two truths together, as a rule, commend themselves to the conscience, and I feel sure that if I could bring them both forward this morning with equal clearness I should win the assent of most Christian men. At this time, however I have to confine myself to the statement that all the grace we have is the gift of God to us, and I trust none will, therefore, suppose that I deny the other side of the question. I believe assuredly that we have nothing good in us but what we have received. For instance, we were dead in trespasses and sin, and we were quickened into spiritual life: my brethren, did that life spring out of the ribs of death? Did the worm of our corruption beget the living seed of regeneration? It were absurd to think so. God be praised for his great love wherewith he loved us, even when we were dead in sin, which led him to quicken us by his grace.

We have been forgiven our great sins — wholly forgiven; through the precious blood of Christ we have been made clean. Did we deserve it? Does any man who professes to be a Christian say for a single moment that he deserved the ransom paid by Christ, and deserved the pardon of his sin? It would be monstrous blasphemy even to imagine such a thing. Oh no; “By grace are ye saved, through faith, and that not of yourselves, it is the gift of God: not of works, lest any man should boast.” God forgave us freely; there could not possibly have been any quality in sin which could have called forth forgiving love. He had mercy upon us because he would have mercy upon us; not because we could claim anything at his hand.

Everything, dear friend, that makes you to differ from the common sinner is the gift of God’s grace to you. You know it is. You have faith in Christ: yes, but did not the Holy Spirit work it in you? Do you not cheerfully subscribe to the doctrine that faith is of the operation of God? You have repentance of sin, but was the repentance natural to you? Did you not receive it from him who is exalted on high to give repentance? Is not your repentance his gift? “Truly,” one will say, “but then the same gospel was preached to others as to us.” Precisely so. Perhaps the very sermon which was the means of your conversion left others as they were. What made the difference then? Do you reply, “We willed to believe in Jesus.” That is true; an unwilling faith would be no faith: but then who influenced your will? Was your will influenced by some betterness of nature in you so that you can claim credit for it? I for one reject with abhorrence any such an idea. Do you reply, “Our will was influenced by our understanding, and we chose what we knew to be best.” But then, who enlightened your understanding? Who gave you the light which illuminated your mind, so that you chose the way of life? “Oh,” say you, “but our hearts were set towards salvation, and the hearts of others were not.” That also is true, but then who set your heart that way, who was the prime mover? Were you or God? There is the question, and if, my dear brother, you dare affirm that in the matter of your own salvation you were the prime mover I am at a loss to understand you, and I hope there are few of your creed. Jesus is not Alpha to you. You do not love him because he first loved you. You were evidently not converted, or turned at all, but you turned yourself. You are not a new creature, but are your own new-creator. Do you look to see the same thing in others? Why, then, do you act as you do? Why do you pray the Lord to turn others if you believe that he did not turn you? Do you pray the Lord to convert your children? Why do you do it? If it is left entirely to them to be the prime movers, why pray to God about them? “Ah,” says one, “God must treat all alike.” I ask again, why do you pray for your children? You ask God to do a wrong thing in blessing your children in preference to other people, if it be true that he is bound to treat all alike. When you go practically to work these sentiments do not hold water. The man who knows that the Holy Spirit was first in his operations upon the mind, and who calls Christ Jesus the Alpha and the Omega of his salvation, is the man who can fairly go to the Lord, and pray for the conversion of this man or that; and he too is sure to give God all the glory of his salvation, and magnify and bless the grace of the Most High.

Perhaps, my dear brother, there is a difference between you and other saints. I am sure there is reason for some saints to eclipse others, for some professors are very poor things indeed. Well, brother, you have a great deal more faith than others; where did you get it? If you received it from anywhere but from God, you had better get rid of it. Dear brother, you have more joy than some, and possibly you feel ashamed of your fellow Christians who are so doubting and sad: beware that you do not become vain of your joy, and remember, that if your joy is true joy you received it of the Lord. Are you more useful than others? You cannot help looking at certain professors who are idle, and wishing that you could stir them up. I know I do; I would put a sharp pin into their downy cushions if I could: but for all that who gives us activity, who gives us usefulness, who gives us zeal, who gives us courage, who gives us everything? If you, dear friend, get into such a condition that you begin to whisper to yourself, “I have improved my gifts and graces at a very noble rate, and am getting on exceedingly well in spiritual things,” you will soon have to come down from your high places. If you register yourself A 1 at Lloyd’s I will not sail with you, brother, for I fear your proud barque will tempt the tempest. I would rather sail with some poor Christian man whose weather-beaten vessel would go to the bottom if Jesus were not on board, for I am persuaded he is safe. “Blessed is the man that feareth always.” Blessed is the man who lies low at the foot of the cross, and who, concerning everything that he has, whether temporal or spiritual, ascribes all to the Giver of all Good.

Another quote in a similar vein about there being two aspects of truth for us to hold onto can be found in Spurgeon’s final sermon at Surrey Gardens:

Espouse but one phase of the truth, and you shall be cried up to the very heavens. Become such a Calvinist that you shut your eyes to one half the Bible, and cannot see the responsibility of the sinner, and men will clap their hands, and cry Hallelujah! and on the backs of many you shall be hoisted to a throne, and become a very prince in their Israel. On the other hand, begin to preach mere morality, practice without doctrine, and you shall be elevated on other men’s shoulders; you shall, if I may use such a figure, ride upon these asses into Jerusalem; and you shall hear them cry, Hosanna! and see them wave their palm branches before you. But once preach the whole counsel of God, and you shall have both parties down upon you; one crying, “The man is too high,” the other saying, “No, he is too low;” the one will say, “He’s a rank Arminian,” the other, “He’s a vile hyper- Calvinist.” Now, a man does not like to stand between two fires. There is an inclination to please one or other of the two parties, and so, if not to increase one’s adherents, at least to get a more ferociously attached people. Ay, but if we once begin to think of that, if we suffer the cry of either party on either hand to lead us from that narrow path—the path of right and truth and rectitude, it is all over with us then.

I am more and more convinced that there are many godly Arminians out there that we Reformed people would do well to listen to more than we do. I am not talking about liberals who throw the Bible out, but those who might have come to different views from us on all kinds of things, but love the authority of Scripture. I might disagree with them but if they love the God of the Bible why would I not want to listen to them from time to time? 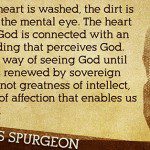 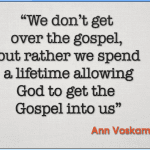