The UK – a nation where the church is currently in decline

In Does the future have a church? from The Briefing we read some pretty shocking statistics about my nation that I thought were worth summarizing here:

The figures about youth are especially concerning.  Of course all such statistics come with the usual health warning, while the Briefing is a reputable magazine, I have not been able to check their sources.  If anyone has a link to other similar stats, it would be very helpful to hear about that.  The general picture of a shrinking church with reduced influence in society is definitely accurate, however. It is worth bearing in mind that Seattle is often described as the most unchurched city in America, but I have seen figures that claim the population is 4% evangelical there (much higher proportions would therefore presumably be churchgoers).

I do not believe the church is finished in the UK just yet, however. The article goes on to point out that there are segments of the UK church that are growing.  Significantly the “liberal church” is declining the most rapidly.  This probably explains why when evangelical leaders begin to promote ideas which would have previously been called liberal, they seem reluctant to embrace that label.  The liberal church is in real danger of being eradicated here in the UK.

What is very interesting is that the segments of the church that are growing all have one thing in common: they are passionate in their beliefs.  I will leave you to follow the link to find out more.  I do, however, struggle a lot with the definitions used in this article –  is there really such a divide between separatist and non-separatist conservatives?  In this day and age, there is also surely a massive overlap between conservatives and charismatics.  Also, the distinction between pentecostals and charismatics has always been hard to maintain with much cross-over.
For some of you reading this, this article may even constitute something of a Macedonian call.  Come over and help us!  For us who are already here, there is a renewed challenge to faithfully follow Jesus and plant more churches. 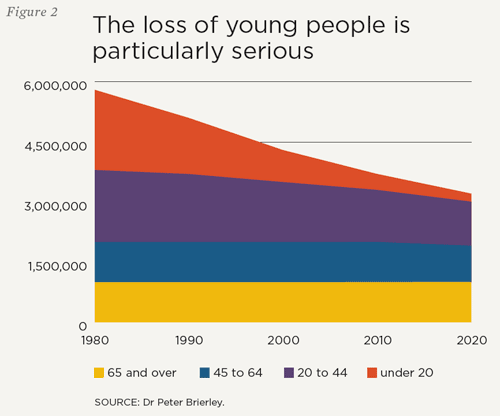