Did God have sex with Mary?

It wasn’t the question my Turkish taxi driver had asked me just yesterday, but I knew it was what he meant. If I had just reflexly answered his actual question, “So do you believe that Jesus is Gods Son?” a blasphemous image would fill his mind, and our conversation would probably shudder to a halt. What then did I say instead?

“Well, that all depends on what you mean by “son of God.” if you mean “did God have sex?” of course not! But Muslims actually agree with a lot of what we believe about Jesus. I mean, the Qur’an says that he was born of a virgin, that he had a very special birth. It says he performed miracles, that he taught, was a messenger of God, even that he rose up into heaven. But, you don’t believe he died, that somehow God stopped him from dying, so of course I presume you don’t believe he rose from the dead, is that right?”

“Rose to heaven yes, but not from dead. Do you really believe that?”

“Yes, I do. But also, I think you could probably agree that in some sense even we are children of God. He cares for us, looks after us. Well, God cared for Jesus the most of all. You probably know also that we do believe that there is only one God. But we worship Jesus. We believe he is God. So if you hear a Christian talk about Jesus the son of God, that’s what we really mean.”

I also told him of my Muslim friends that we are close enough to that they babysat two of my kids this week, told him that Muslims are welcome to visit our church to see what goes on, as I have once visited a Mosque. At the end of the conversation he seemed genuinely interested in what I believe, and we had spoken about other areas we agreed on, like moral behavior.

Wherever you live there’s almost certainly Muslims living near you. I urge you then to read a great article I found recently on a Christian response to Muslims concerns over the idea of Jesus as the Son of God.

As is always the case, if you want to know what your Muslim friend believes, do ask him! But I think that article explains the issues pretty well.

May 22, 2012
BBC Pentecost praise LIVE from a Newfrontiers church in Brighton
Next Post 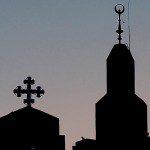