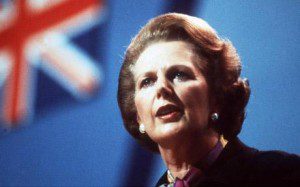 It was hours after the announcement that I heard the news that the UK’s first and only woman Prime Minister had died. In life she was always a figure that inspired love by some and hatred by others. It is alway so with every great leader. I hope that in death her impact on this great nation of mine will be re-assessed by all, no matter what political party we come from.

There is no denying the massive impact this woman had on our politics. The Guardian’s timeline of her life makes the point that she became Prime Minister in 1979 when I was eight years old. She ruled our country with the resilience and determination that got her the nickname “The Iron Lady” for the next eleven and a half years. This makes her the longest serving Prime Minister of the 20th century. That is quite an accolade, when you consider that we are not very forgiving of our leaders in this country. Despite not having official term limits, it is rare for someone in that office to survive two complete terms (each being a maximum of five years), let alone win a third. Tony Blair didn’t manage it, although he shortened the terms and hence managed to win three elections, he only survived in office ten years and two months. Winston Churchill was rejected by the British electorate, despite having won the Second World War. He did later end up having a second period of office, his first lasted four years and five months, the second five years and two months, hence altogether he was in office for less time than Blair or Thatcher.

In the Seventies it was no small feat for a woman to win highest political office in any nation in the world. Even more so, considering that as the daughter of a grocer she did not have the advantages of familial connections to help her on her climb to the top. Until today there are few women who have reached the highest political office in their nation. There are also very few political figures who get a political philosophy named after them. “Thatcherism” is still widely used as a label today. The only other British political nickname like that with any sticking power in my lifetime was “Blairism”, but use of that term seems to me to be dying away.

In politics I am something of an agnostic. I was broadly supportive growing up of Thatcher, but then I was of Blair too. But one of the striking things about Blair is that he seemed to offer a complete surrender on almost everything that Thatcher had fought against the Labour party for. There were no attempts by Blair to reverse things like the legislation she had passed to reduce the power of the Trade Unions. Thus, thanks in part to Blair, she changed the political landscape of Britain forever.

In a time when our national identity seemed to be embroiled in a sense of terrible decline, she stood up boldly for our nation saying we could be “Great” again. The Empire had gone, but we could still play a significant part in the world. She instilled confidence, that vital task of a leader that few can successfully achieve. Her patriotic love for our Nation was obvious to all, and Cameron’s description of her as “lion-hearted” seems apt. She prescribed difficult remedies, including cuts to public spending (as a percentage of GDP) and flexibility in the labour market. She forged a strong personal alliance with Reagan, and history suggests that it was their resilience that helped to see off the threat of Communism in Europe. The effects of all this were hugely controversial at the time, but Cameron is probably right when he said, “Margaret Thatcher didn’t just lead our country – she saved our country.”

Not everyone in my own family was as politically agnostic as I have tended to be. My paternal grandmother, who was born as Muriel Driver was a passionate supported of Thatcher. For me, the two were always entwined in my mind. My Nanny embodied the thrift and hard-working ethic that Thatcher promoted. She was not afraid to splurge rather a lot on food when family came to visit, however. The prosperity that unrestricted access to food indicated was much more meaningful for those who had lived through rationing (which, of course, outlasted the War).

My Nanny also subscribed to the opinion that we should not simply leave the State to care for those less fortunate than ourselves. Into her eighties she would help the “old people” of her village, many of whom were younger than she was! Thatcher would have been proud of my Nanny, for when Thatcher was alleged to have said “there is no such thing as Society” she meant that individuals within a country make up Society and should act for the good of everyone. In an age where the Welfare safety net will increasingly have holes in it, we do well to heed that advice. Indeed, on the day that my Nanny eventually died in November 1990, she had gone shopping for food for some of the ladies in the village. She would have heard the news that very day Thatcher had been forced by her own party to resign. Like Thatcher personally, she would have seen that as a huge betrayal. Her blood pressure was already known to be high, the news would have sent it higher still. An aneurism in her ascending aorta that was not known about burst in response. It seems my Nanny felt a tinge of upper abdominal pain, believed she was hungry, and decided to make herself a scone and tea, that very English snack. Still propped up at the kitchen table, my Nanny died, glad not to have had to end her days dependent on the Nanny State which both indomitable women so despised.

As a side note, this is one area where the US political system could teach us a thing or two. Because of the term limits, the US Presidents are usually able to ride off into the sunset as their political capital is still intact, or fading. Both Blair and Thatcher would have been spared regicide by their own parties if this was our system too. It is sad that Thatcher’s political retirement like so many of our politicians was marred by the thought that she had been betrayed. Perhaps the most fitting memorial to her would be to add to the newly fixed-length terms of parliament that no British Prime Minster should serve more than two complete terms (ten years).

I am grateful to God for Margaret Thatcher. You don’t have to agree with everything that she did in order to join me in giving thanks for her life.

April 8, 2013
What are mental illnesses and disorders? What effects do they have?
Next Post

April 9, 2013 Ed Stetzer writes for CNN about Mental Illness and the Church
Recent Comments
86 Comments | Leave a Comment
"I am rather late to the party, but I have only just come across this ..."
Peta Christians must stop lying about COVID19
"I am also a survivor of cancer (5 times and counting). I noticed the "Teach ..."
Statistics Palin Two years on from chemotherapy
"Science always beats Religion. You wouldn't be alive without TechnologyHad the Ancient Sumerians gotten access ..."
Christian Two years on from chemotherapy
"Wrong Oxymoron. Jesus' issue with the Pharisees was how they subverted the Word of God ..."
Ed Dingess Rachel Held Evans is with Jesus
Browse Our Archives
get the latest from
Adrian Warnock
Sign up for our newsletter
POPULAR AT PATHEOS Evangelical
1

Covid Christmas: I say to hell with it
Yes, Virginia, it’s our first Covid Christmas and there isn't a Santa...
view all Evangelical blogs
What Are Your Thoughts?leave a comment
Copyright 2008-2020, Patheos. All rights reserved.