As I was growing up I had some sense that God was calling me to some form of mission.  I had no idea that would involve writing a blog which is read around the world, and serving on the leadership team of a church with around 70 nationalities represented. But I had a sense I needed to learn something about cross-cultural ministry.  I was raised in two areas of the UK which at the time were filled almost exclusively with indigenous people. I remember praying, “God you are going to have to send me a friend who isn’t English.”

Then in the summer of 1989 I attended a missions conference and met one of the speakers who worked for YWAM, alongside a Christian family from Pakistan. Somehow we made a connection that has lasted for decades. Throughout my medical school days I would visit with this family, and they taught me what culture is, and how to make connections that transcend  barriers of misunderstanding.  I will be forever grateful to God for giving me such friends. God was preparing me through them.

Fast forward to 2013, and about a month ago a suicide bomber killed at least 100 people and injured many at a Church in All Saints Chuch in Peshawar, north western Pakistan.

My dear friend was in Pakistan at the time, and together with people on the YMAM Pakistan team which he leads he has been visiting and supporting the families involved. It is traumatic work. Here is what they reported after their most recent visit: 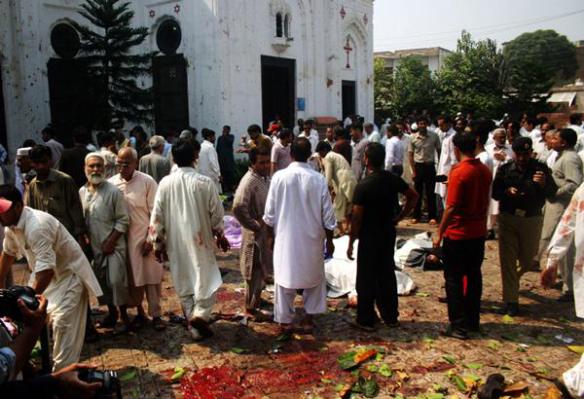 If it were not enough for 82 people to have been instantly killed by suicide bombers, we have been hearing reports of people who were certified dead by doctors sympathetic to the bombers’ work. Wounded, but conscious, they struggled to make themselves heard and escaped being buried alive . . .

In hospitals we found children in constant pain from multiple abdominal injuries and young people in their prime who had lost limbs, one person alone had lost all four and also sustained abdominal injuries. So many adults were almost paralysed by shock and recently widowed mothers were discovering there was no-one anywhere in the world whom they could depend upon to care for their children or provide for them in the future. It was hard to take it all in.

There are many needs that are not going away. Families who are left without a breadwinner. Other’s who need ongoing care in hospitals, and are being discharged too soon because their funds have run out.

I am told that to meet the needs of these families my friends and their team will requure just a few thousand pounds.

I would like to invite you to consider making a donation to fund YWAM Pakistan’s activities to help these victims of a tragedy that the world’s media has long since left behind. I can personally vouch for the directors of this work, and I know that money’s donated will be wisely used.  As we in the West have the luxury of being able to worship unhindered, this is a way, if God prompts you, that you can show solidarity to our brothers and sisters.

You can make a tax-deductable donation if you are from the USA or UK by following the instructions on this page.

October 28, 2013 Strange Fire: Can't we just get along?
Recent Comments
0 | Leave a Comment
Browse Our Archives
get the latest updates from
Adrian Warnock
and the Patheos
Evangelical
Channel
POPULAR AT PATHEOS Evangelical
1