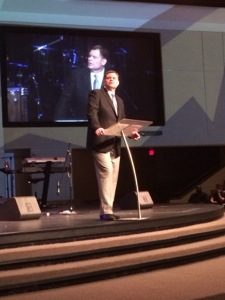 It was wonderful today to see my dear friend as he skillfully pastored his own people today. I wanted to share with you some notes from his sermon.

The greatest sermons are not the greatest expositions but the sermons that are lived. It doesn’t do any good to simply know what Gods word says we have to live it. If we believe truly that Jesus is the only way we should love everybody. We should want everyone Muslim, atheist or whoever to hear about Jesus. God wants us to be his servant.

We are meant to be like Barnabas. Without him Paul would not have been accepted as a Christian, nor would he have been a missionary.

In Antioch the gospel jumped outside the confines of the Jews and the apostles. When you accept Jesus you are born a missionary. You are just a good one or a bad one.

In Acts 13 the church sends them out. It switched from Barnabas and Paul to Paul and Barnabas. Paul takes the preeminent role. Barnabas was fine with it. He was a servant. It didn’t matter who had the title.
That’s why Bob doesn’t need people to call him pastor. He’s happy to be just called Bob.

Paul was hard to work with. He had a new partner about every six months. He was challenging. He wasn’t perfect. Barnabas did argue with Paul, but it wasn’t over himself but over John Mark. Barnabas served others and promoted others.

Why do you serve? Is it to look good? Or is it like Barnabas. Philippians 2:1-4 may have been inspired by the son of encouragement.

Jesus showed us the example of true servant hood by not grasping equality with God but humbling himself and going to the cross.

November 17, 2013
VIDEO: MacArthur consigns charismatics to hell and likens them to Mormons
Next Post

November 19, 2013 The church: one generation from extinction?
Recent Comments
3,802 Comments | Leave a Comment
Browse Our Archives
get the latest updates from
Adrian Warnock
and the Patheos
Evangelical
Channel
POPULAR AT PATHEOS Evangelical
1

The Windswept Plains of the Heart
My review of Wholehearted Faith and What Is God Like? went up...
view all Evangelical blogs
What Are Your Thoughts?leave a comment
Copyright 2008-2021, Patheos. All rights reserved.