Why God’s Not Dead is taking movie theatres by storm

Why God’s Not Dead is taking movie theatres by storm March 26, 2014 Adrian Warnock

God’s Not Dead starring Shane Harper, and Kevin Sorbo, who starred as Hercules in the hit TV show, has been taking the movie world by storm. Grossing over $9 million in its opening weekend with a limited release it is already No. 15 in total box office takings for Christian movies of all time.

God’s Not Dead is an emotional tale of a Christian student who wouldn’t be silenced by a bullying Atheist professor. Rather than deny his faith, the student fights back by tackling the intellectual poverty of many arguments for atheism. As scientists become ever more confident of the Big Bang explanation for the origins of the universe, the student points out the obvious but all too rarely asked question, “OK, but if that is true who made the Big Bang?” The classroom debate scenes use the classic Socratic method of using questions to probe the weaknesses of someone’s position. 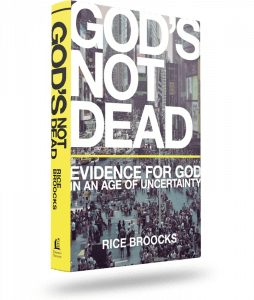 The film was inspired by the book God’s Not Dead by American pastor and evangelist, Dr Rice Broocks. The concepts for the debate are all taken from the book. which explains nine arguments for the existence of God in a modern, accessible way. I strongly encourage you to get ahold of a copy and read it.

One reason the film is proving remarkably popular with Christian audiences is that it offers an approach to faith conversations that does not require Christians to sound ridiculous. The student humbly, respectfully, and yet robustly compels his professor to admit the conclusions of his atheism

The Western world is fast forgetting how to have a real conversation. On issue after issue we are split down the middle. Sometimes it feels as if we were to take a poll asking what people thought about almost any social issue the results would come out 51% to 49%. We also have a tendency to assume the worst about the other side. We metaphorically take up stones against those who disagree with us. This can either lead to us openly mocking the other group, or retreating into a philosophical ghetto and simply not interacting. As the old saying goes, “Never talk about God or politics.”

Our isolation from each other is perhaps greatest of all on the subject of God. And because we don’t speak about this subject all kinds of myths get created. Many, especially in the younger generations seem to believe that almost nobody actually believes in God. There is a strong agenda in certain parts of the media to promote such an illusion. Religion in all its forms has tended to be portrayed as a cause of trouble in the world, rather than the comfort it is to most people of faith. Hostile atheists are given an almost unchallenged opportunity to attempt to shape the worldview of millions. In the public square, Evangelical Christians are increasingly muzzled. 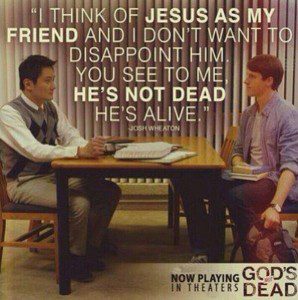 Christians are faced with open ridicule, hostility, and even in some cases outright discrimination. They feel increasingly alienated from a cultural landscape that they once dominated. Many secretly feel that their faith cannot be adequately defended in an intellectual debate. Faith for many has become something personal, which is not to be discussed openly for fear of rejection or worse being the response.

The movie has several highly evocative subplots. Some have criticised a few of the characters as seeming extreme. But anyone who thinks the atheist professor is a caricature clearly has never heard the increasingly shrill pronouncements of Richard Dawkins, for example.

One character unceremoniously finishes a relationship because his girlfriend is diagnosed with terminal cancer. Admittedly few people would be that selfish, yet if Darwinian evolution is the only explanation for our existence surely he is just acting in a consistent way with his purpose of propagating his genes with a healthier woman?

The film will also appeal to a broader audience since 74% of the US population continues to believe in God. If committed Christians lack confidence in articulating their arguments for the existence of God, then the silent majority is surely even less able to articulate the reasons for their belief. They will be rooting for the student in this film.

Many Christians find watching the movie leaves them with a new boldness and confidence. The film seems to grip them and propel many to a new level of courage. It is hard to be a Christian in a world that is hostile. But, Jesus is calling us to be faithful to him, and acknowledge him in our generation.

Below you can see the trailer of the film followed by a segment of Ed Stetzer’s The Exchange where we discussed the film with Rice Broocks, the author of the book that inspired the movie. You can also see the whole program here.

March 25, 2014
Kevin Sorbo interviewed on Inside Edition
Next Post