Did Rosberg Cheat? What Hamilton and Formula One should do about it

Did Rosberg Cheat? What Hamilton and Formula One should do about it May 26, 2014 Adrian Warnock

I don’t think I have ever written on here about my favourite sport: Formula One. But this weekend has left me a little disturbed. So far this year for those of us who had got bored of the domination of Red Bull, the success of Mercedes has been a blessed relief. Right now, most fans don’t care that Mercedes are dominating even more than Red Bull did over the last few years, nor that they look like they may achieve the  most dominant season in the history of Formula One. Partly this is because it is a change. But it is also because there is a genuine battle between the team-mates.

But, for the second weekend in the row miserable faces on the podium rather took the edge off the weekend for many of us.  We understand that there is immense pressure on both Rosberg and Hamilton.  We get that they are disappointed if they loose.  But do they have to pout quite so much? After all there have been six races so far, and Mercedes have won all of them, and apart from a solitary mechanical breakdown the other driver has come second. Enjoy your moment of glory fellas!

There was, however, a clear reason for the upset this past weekend with Rosberb’s controversial qualifying accident directly determining the outcome of the race. Hamilton clearly believed that Rosberg had gone wide, causing a yellow flag deliberately. The paddock was split on this, as were the pundits. But the stewards concluded that there was no evidence he did it on purpose. But the absence of evidence is not evidence of absence. As a skilled driver it is surely possible that he did cheat in the same way Schumacher did back in 2006. In a similar way this episode with Rosberg has left a nasty taste. Most believe that he doesn’t have it in him, that he lacks the “killer instinct” that would drive a man to be so blazon.  But at a minimum he judged the situation very poorly, as his celebration of the pole lap should have been tempered by embarrassment that his rookie error meant that the only man who had a chance of beating him was impeded.

That Hamilton has even considered Rosberg might have cheated so outrageously will surely have destroyed any last remnants of trust between them. Rosberg is no doubt indignant that anybody would think he would stoop so low.  That coupled with the fact that Hamilton was denied a chance to potentially jump his team mate by making an early pit stop in response to an accident means that all is not well at Mercedes. Whether the squabble will degenerate to Senna-Prost levels or even Alonso-Hamilton remains to be seen.

But for the aim of removing the potential for a similar cloud in the future, there is a simple rule change Formula One should consider. Apparently something similar to this exists in a race series somewhere in America.  If a driver crashes out, or in any other way causes a yellow flag during qualifying, hence impeding his fellow competitors, he should be penalised. This penalty should be automatic, and not dependent on showing any blame attached to the driver.  Perhaps the easiest penalty would be that all the drivers times for that portion of qualifying would be voided. Thus, Rosberg would have started 10th with his dignity intact. Nobody would have assumed that he had his incident on purpose. And perhaps he would have been a bit more careful not his lap to avoid such a punishment.

What about it Bernie? 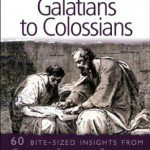 Craig's Atonement and the Death of Christ--- Twenty...
Q. I think you are right that the moral influence of the...
view all Evangelical blogs
What Are Your Thoughts?leave a comment
Copyright 2008-2021, Patheos. All rights reserved.
error: Content is protected !!