Fact: If you’re a guy in high school and attend church right now, chances are that in a year or two, you won’t. For some reason, church and youth group connects with high school-aged guys, but college guys drop out.

The statistics are against you. Studies show that while as many as 80 percent of you attend church in your last years of high school, the number drops to 52 percent during your freshman year of college, and to 29 percent your junior year. College guys just aren’t involved.

Maybe there’s more freedom in college. Your mom (or your youth pastor) isn’t nagging you to go to church each week.

Maybe you don’t have easy access to a church while in college. You’ve got to take the bus or subway, or hitch a ride from a friend with a car.

Maybe it’s just a lot easier to sleep in on Sunday mornings.

Maybe the older you get, the more church seems irrelevant. You’d like to go, but nothing there seems geared to you.

Here’s another fact: If you went to church as a high schooler but aren’t attending now as a college guy, chances are good that in a few years you’ll return. Statistics show that you’ll sit church out for about a decade—from ages 19 to 29, and then start going again in your early 30s It’s just that gap in the middle that’s a problem.

Why is this gap such a problem? It means you’ll pass through your most formative years as a young adult with your Christianity on the back burner. All the life-shaping decisions of that decade—to finish college or not, what career to pursue, where to live, whether to get married, who to marry, whether to have children, and many more crucial questions—will take place without the positive influence of spiritual assembly.

Why might you want to get plugged into a church in your college years? Think of a young Luke Skywalker when he’s taking his first steps toward his destiny as a Jedi Knight. He wants to be the world’s best X-Wing fighter pilot, and he knows he needs to surround himself with the best training and guidance possible. What does he do?

He goes to Dagobah.

Church: the Dagobah you need

Can you picture Dagobah? It’s the harsh, murky, humid environment where the Jedi-Master Yoda lives. Luke flies his X-Wing there to learn from the best.

At first glance, Dagobah is not much fun. The planet is covered in gnarled trees and fetid swamps, kind of like church is awash in gnarled worship music debates and fetid committee meetings.

In Dagobah, huge lagoons are home to fearsome snakes and swamp slugs. What’s fearsome at church? Ever glance at your watch every 30 seconds—about every time the minister says “and in conclusion …”—but you know he’s got at least 20 more minutes of brimstone left in him?

Few would ever come to such a place willingly.

Dagobah is the place that helps shapes him into who he’s meant to be. During his training on Dagobah, Luke learns the ways of the Force. It’s the place where he learns to lift his X-Wing fighter out of the swamp using just his mind. He learns how to effectively slash with his lightsaber. In a word, he learns the next step of becoming the man he needs to be.

That’s church. It’s for training. It’s for service. It’s to shape and mold you, even if it’s sometimes like a swamp.

The Bible says that church is a place designed to band together with other spiritually minded people––even people with personalities that aren’t exactly like yours. Why? Because there’s something good that happens from not being by yourself all the time, particularly in a spiritual sense. Other people help us grow. We help shape them and they help shape us. Even when it’s uncomfortable. Other people help us learn how the world operates. We become wiser with other people in our life.

Really, church isn’t a place at all—so this is where the illustration of Dagobah breaks down a bit. Church is actually an entity. It’s a living organism. It’s not a building with siding, neatly trimmed grass and a steeple on the roof. We always talk about going to church, about attending church, about the pros and cons of a good church service. But really, church is us. Church is the gathering of all believers everywhere.

We don’t go to church.

We are the Church.

Paul continues this metaphor in Ephesians 4:12. The main purpose of the church is so that the body, God’s people, can be “prepared for works of service.” The service is so that everybody is built up, unified in the faith and spiritually mature.

When you gather with other people as the church, you’re being given the opportunity to be built up. You’re learning how to be an X-Wing fighter pilot, in a spiritual sense.

The bottom line is that if you’re not gathering together regularly with a group of people for the purposes of spiritual formation, you’re missing out.

Married now? Thinking of marriage in the future? Get a free copy of my free e-book,

10 simple commitments husbands can make that lead to stronger marriages.

“I loved The Marriage Manifesto” 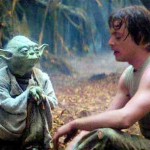