Making Light: Interfaith is Not a Dirty Word

Once again, we’re having some excellent conversation about the way we relate to people of the Abrahamic faiths, as well as about the place of those who have elements of Abrahamic ritual or belief among the diversity of Pagan faiths. Jason Mankey had some excellent points in response to Sam Webster’s post, and I’d like to riff off of some of what Jason says. (Jason, I must admit I only skimmed the article. It’s hard to juggle a fussy infant and read about interfaith relations. But the bits I caught were really good! Also, I’m a little slow in the response. See above re: infant. I’m usually typing with one hand while Miss Sunshine sleeps/nurses/fusses in the other. That’s just how we roll at Chez Sunweaver.)

There are two separate issues here, and I believe they have the same root. The first issue is our relationship with the monotheists. Turns out, I am friends with the folks at the local mosque and consider the imam a friendly colleague of mine. Doing interfaith work has been some of the most important work I’ve done as a priestess, and I like to think that I’ve made a difference in my local community. A few years ago, I co-founded an interfaith group with other women of various faiths, cleverly named Women of Faith. One of our main purposes is to show others that people of different faith backgrounds can work together toward positive change.

We can’t do that if we put our energy toward criticizing the theology or practices of our fellows. Frankly, most people who have a religious practice sound a little nuts if they speak honestly about their belief, and all faith traditions have inconsistencies and bits they should probably be ashamed of. I worship the gods of Olympos. The history of others who have done so is not exactly squeaky-clean. I choose to own that and move on. Just because the ancient Greeks murdered and persecuted others who didn’t worship the Theoi doesn’t mean that this behavior has to color my practice. I can be better than that, and most Christians, Muslims, and Jews are likewise better than their histories. I count all of these faith groups among my friends and relations and so far, we prefer getting together for snacks over busting up each other’s places of worship.

The other issue is the worship of the Abrahamic god and that Jesus feller among our own kind. To put it succinctly, I don’t have a problem with it. I’m a polytheist, and it’s just as easy to also believe in their god as it is to believe in all the Theoi or all the Norse gods or whatever. It’s no skin off my nose if my friends Maryam or Shepherd (both very fine Pagan people) want to acknowledge the son of that god in some way. My religion has lots of children of lots of gods. Herakles, Perseus, Jesus… whatevs. In the vernacular of my people: It don’t make me no never mind. It’s not my thing, but there’s no reason for me to consider it any different than any other religious path.

The root of this problem seems to be that first generation Pagans were hurt somehow by the churches they once attended and that this hurt, coupled with an attachment to being right, caused disdain for anything associated with the monotheist paths. That gets passed down, and we end up with groups of Pagans that have a superiority complex about their religion. I don’t need to be right about religion. Being right is less important to me than, say, collecting food for the food bank with my Muslim friends at Ramadan or gathering school supplies for needy children with my Christian friends or having a meal with my Pagan friends. And I can’t be arsed to go to the trouble of criticizing someone else’s religion when I’m still working on the lifelong task of understanding my own. It’s too much work.

Anyway, my husband was Catholic at one time and now considers himself vaguely theistic. Every day is an interfaith event for me, so in the interest of marital bliss, we each do what it is that flips our spiritual switch, and we raise our children to follow the path that speaks to them and to not be jerks to other people who have different concepts of the divine. Midwinter family gatherings would otherwise be impossible. Our combined families are whatchacall “diverse.” I may speak more on that later.

As a side note, it’s near Theogamia, so (also in the interest of marital bliss), I’d like to wish Zeus and Hera a happy 2788th anniversary. 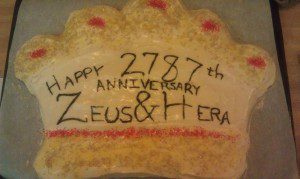 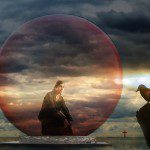 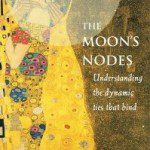