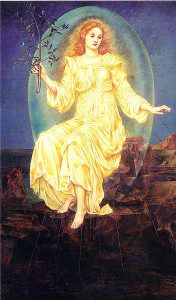 The Neoplatonist philosopher Iamblichus taught a form of pagan mystical practice he referred to as theurgy, the goal of which was a mystical state he called henosis. Theurgy is the ritual practice of magic for mystical purposes, and henosis is mystical union with the divine in a pagan context. One of the methods of theurgy Iamblichus taught was the use of visualization to take on the role of the gods in creating and sustaining the universe. The Tibetan practice of deity yoga is based on a similar concept.

We have no way of knowing if anything like this was ever practiced in a Celtic context, but there is an interesting gloss on the story of Conlai in the Senchus Mor, to the effect that the druids claimed to have created the earth, sea, sun and moon. If druidic practice contained rituals dramatizing the creation of the world and the elements, this could be seen as a similar concept to theurgy, henosis or deity yoga.

As wildly speculative as that certainly is, we can make use of the concept in our visualization practice by combining it with the seven duilean or elements of Gaelic lore: the earth, the sun, the sea, the clouds, the wind, the stones and the spirit. In medieval Irish lore about the “Body of Adam,” the earth is identified with Adam’s body, the sun with his face or eyes, the sea with his blood, the clouds with his thoughts, the wind with his breath and the spirit or Holy Ghost with Adam’s soul.

This lore did not originally refer to Adam, as it appears in many different cultures and religions in similar forms and appears to be very ancient. For instance, in Hindu mythology the primal man is referred to as Purusha, but the story is otherwise much the same — a primal human whose body is identified with the elements. In some legends, the entity in question is a goddess rather than a “primal man,” and in some Neoplatonist and Gnostic versions of the concept, the primal human is neither male nor female.

In medieval Ireland, the dominance of Christianity ensured that any concept of a “primal human” would be referred to as Adam, but otherwise the lore in question is very similar to other such legends from many different cultures. In the next visualization, we’re going to use this lore to focus as intensely as possible on the goddess Brighid and to create the universe in union with Her.

Begin by breathing slowly and deeply, then raise the circle of fire. You can also perform the fiery water, three sisters, four treasures and manor of Tara rituals if you wish. Once you have attained a mental state in which you can feel the power of Brighid’s fire and presence, try to let go of your sense of self and of a distinct identity. Sink back into Brighid’s fire, into the Brig of creation. Let everything drop away except the ground of reality, the fiery power of consciousness itself.

Now feel yourself breathe. Watch your breathing go in and out and see the changes in the flame of consciousness, the ebb and flow of its tide-like rhythms. There is a mantra-like Gaelic proverb that describes the tide with these words: Mar a bha, mar a tha, mar a bhitheas gu brath, ri tragadh ‘s ri lionadh.

Watch the ebb and flow for a long time; recite the proverb as a mantra if you wish. Then, very gently, let thoughts arise. Don’t try to do anything in particular with them, but watch how they flow. Let them take the shape of passing clouds driven by the wind of consciousness.

You are now three things: the fiery Brig of consciousness, the ebb and flow of your breathing and the passing clouds of your thoughts. Remain with these three for a good long while, but eventually allow an awareness of your physicality to emerge into your mind. Begin with the flow of your blood, like the darkness of the sea. Imagine your waters advancing and receding, in the same rhythm as the tide of your breath. Let the picture take shape in your mind: a lightless sky filled with clouds, a great wind driving the clouds across the heavens, the endless depths of the ocean. This is the time before the creation, and the world is nothing but the Sky and the Sea. There is as yet no Land.

When the moment is right for it, allow the Brig to strike a spark, lighting the heavens with your two eyes: the sun and the moon. Abstract consciousness is now particularized, localized into a time and place. Instead of the dark waters of the chaos sea, unlighted by sun or moon, there is now a world.

You have just created the world. 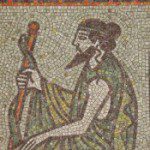 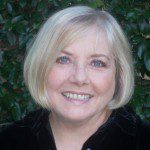 June 7, 2013 A Professional Priesthood?
Recent Comments
6 Comments | Leave a Comment
Browse Our Archives
get the latest from
Agora
Sign up for our newsletter
POPULAR AT PATHEOS Pagan
1