Loop of Brighid: Invocation of the Graces – A Brigidine Sacred Text, Part 5 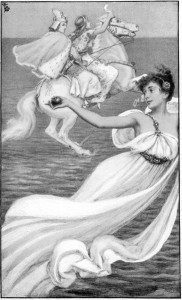 The ambiguity of some of the Gaelic words and phrases in the “Invocation of the Graces” makes it difficult to say exactly what virtues Brighid is supposed to be granting to the recipient of the charm. Some of Carmichael’s translation choices seem to skew towards a Victorian conception of feminine virtue.

The three most difficult phrases in the list are gleus na Mnatha Sithe or “skill of the Fairy Woman,” gniomh na mnatha Grég or “tact of the woman of Greece” and mein na Dearshul agha or “tenderness of Darthula delightful.”

All of the eight virtues granted by the eight feminine powers seem to refer to specific incidents in Gaelic oral tradition, even if we cannot always tell which story is being referred to. To come up with a set of eight virtues we can actually work with, we need to consider all the implications of each line in the original Gaelic.

“Skill of the Fairy Woman” is not a bad translation of gleus na Mnatha Sithe considering the difficulty of translating gleus. However, simplifying the concept down to “skill” would be highly distorting. The idea is not skill in a generalized sense, but a state of being like that of a fairy woman. In Gaelic tradition, fairy women are powerful, dangerous, seductive, capable of granting poetic inspiration and eternal life in Tir na n-Og, but equally capable of draining away a man’s life-force or changing into a raven and eating the flesh of the fallen on the battlefield. They are perilous entities to have anything to do with- not that that ever stops anyone!

An inner state like that of a fairy woman could possibly be rendered in English as “enchantment” — as long as we bear in mind the darker implications of that word.

Of course, the phrase “fairy woman” carries very different connotations in English than in Gaelic. It would probably be less distorting to translate Mnatha Sithe as “woman of the otherworld” rather than “fairy woman.”

As we have seen, “gniomh na mnatha Grég” is probably not “tact of the woman of Greece,” since gniomh means a deed or a task. It’s not impossible that the line refers to Helen of Troy as Sharp suggests, but it could just as easily refer to any number of Gaelic folktales where the hero visits a fantastic imaginary version of Greece. It is probably best to simply translate this word as “deed,” as the doing of heroic deeds fits both the sense of the original and the concept of a list of virtues.

The phrase “mein na Dearshul agha” can only mean “tenderness of Darthula delightful” if we interpret mein as mercy or pity, but this seems unlikely. An analysis of Gaelic compounds containing mèin or mein suggests that the word should be translated as temperament or character. For instance, ain-mèin is pride, haughtiness or arrogance according to am Faclair Beag while gabh ain-mèin means to become enraged and ainmein means fury or rage. Ain is a negative prefix in Gaelic, so ain-mèin is the state of losing your mèin. It seems similar to the concept of “losing your temper” in English.

Bearing in mind the difficulties of translating these phrases with any confidence, I suggest that this verse of the “Invocation” might be rendered as follows:

So, our list of eight virtues is either skill, virtue, faith, tact, beauty, tenderness, courage and charm (as Carmichael would have it) or the following rather different list:

The second list presents a rather different portrait of both virtue and femininity than what emerges from Carmichael’s translation. 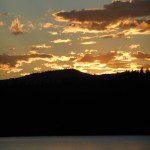 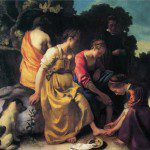