Loop of Brighid: Invocation of the Graces, a Brigidine Sacred Text – Part 6 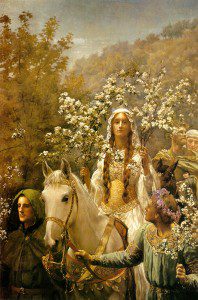 The next verse in the “Invocation of the Graces” uses primarily images drawn from the natural world to convey another set of eight blessings:

Carmichael’s translation of these phrases is fairly literal for the most part. The phrase Carmichael translates as “the joy of all joyous things” is “sonas gach ni eibhinn,” which could be “happiness of every cheerful thing” or “bliss of every funny thing” according to the Gaelic dictionary Am Faclair Beag. The word eibhinn generally means something odd, funny or joyful.

“The light of the beam of the sun” brings to mind the solar associations of Brighid, which is not surprising because She is supposed to be the one speaking the charm.

“The door of the chief of hospitality” refers to the Gaelic custom of keeping open house. Chiefs and kings would leave their doors open at all times to display their extravagant generosity and hospitality, and any person could come in and receive food and drink free of charge. No chief would have been considered a genuine chief if he failed to uphold this custom. St. Brighid of Kildare was renowned for her generosity, especially with the wealth of the rich and powerful men who owned her when she was a slave!

“The surpassing star of guidance” seems like a reference to the symbolism of Imbolc. The reul-iuil Bride or “guiding star of Brighid” is a star-shaped ornament attached above the heart on the Brighid doll families would make at Imbolc.

“The step of the deer of the hill” implies a light-footed, graceful quality, while “the step of the steed of the plain” implies a proud, domineering quality. The phrase Carmichael translates as “the step of the steed of the plain” is “ceum steud nam blaru.” A “blàr” is a field or a plain, but the word is often used in the names of Gaelic battlefields, as in the famous clan fight of Blàr na Pàirce. Am Faclair Beag lists “battlefield” as one of the definitions of the word.

In the phrase “the grace of the swan of the swimming,” the word Carmichael translates as “grace” is seimh, which Am Faclair Beag defines as calmness, gentleness, mildness or kindness.

In the phrase “the loveliness of all lovely desires,” the word Carmichael translates as “loveliness” is ailleagan, which Am Faclair Beag defines as a little jewel or treasure, noting that the word is used as an endearment for young people. The word Carmichael translates as “all lovely desires” is rùn. This interesting word is etymologically related to the Norse “rune” but it means a mystery or a secret. When used in phrases such as mo rùn (“my love”) it means “love.” So this phrase could be rendered as “thou art the little jewel of the mystery of love.”

In the version of “Invocation of the Graces” that appears in the first volume of the Carmina Gadelica, this verse is the last verse that does not rely heavily on Christian concepts and images. In fact, by invoking some of Brighid’s elemental powers of sunlight and starlight, animal qualities like those of deers, steeds and swans and the ancient Celtic ideology of hospitality, this verse could be considered somewhat “pagan.” The rest of the verses in this version concentrate on God and the saints, so we’ll be examining a different version of the “Invocation” next time. 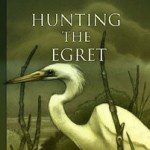 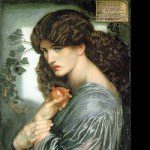 August 30, 2013 Syncretic Electric: Looking at our History (Part 2) - Nostalgia and Literature
Recent Comments
6 Comments | Leave a Comment
Browse Our Archives
get the latest from
Agora
Sign up for our newsletter
POPULAR AT PATHEOS Pagan
1