Hills of the Horizon: Narrative Theology I

Human beings are creatures of narrative.

We do not exclusively live in the universe of the material, but rather in our stories about ourselves, about the world around us, about what everything means. There are mythologies that observe this tendency: the story in Genesis is one of them; some of the myths of Egypt speak to this power of narrative, of naming things into being as well. The motif of the name, the power of the story, appears in “Rumpelstiltskin” and returns in The Neverending Story. Terry Pratchett comments upon the power of narrative and the difficulty of fighting that narrative in Witches Abroad.

This is one of the natures of myth: stories about the liminal, the numinous, the sacred, and about how people involve themselves with these things, and about what these things mean and how they relate to the rest of the cosmos.

The art of definition is part of this art of narrative. If I call myself a witch, I am telling a story – to myself, and to the universe, about what sorts of things I am, what sorts of things I do. If I call myself reconstructionist, I am telling a different story, again, to myself, and to the universe. The communities I deal with are dealing with those stories, exploring nuances of what they mean, what they mean we are becoming. We are filled up with stories, and words that serve as pointers to those stories.

This is not, of course, simply a matter of religion. Politics is hugely defined by a world of competing stories, narratives, assigned meanings. The history of pride and liberation movements has been filled with changing the stories about what it means, what it is to be part of those groups. Going through therapy is, in my experience, immensely a process of changing the stories one tells oneself, about one’s past, about one’s current situation.

If I tell you a story about the gods, then I am drawing lines of meaning in the mind, I am not only associating these abstract and numinous entities with each other but with interactions within the structure of the world. Ra’s name was stolen; the power of creation was passed down into a line that incarnates in the human world. Grain gods are often dying gods and have the power of rebirth; their life sustains the world, and they are born again from the same seed. The devil has stolen the strength out of the crop, but we can go into hell and retrieve that life-force and restore it to the land. The powers of annihilation are everpresent, and must be fought, but in their time they can be defeated, turned aside, and life can continue.

Fill it in with your own stories, your own myths: these do not describe the world, they create it, they provide substance to the narrative in which a human mind lives. This is one of the ways in which the use of language generates the world.

We tell stories about ourselves, I think, more than anything else. Little stories, most of the time: I am tired. I am happy. I am through with this shit. I am doing my best. And we can storytell ourselves into holes. (One of the more fascinating effects of my training came when I realized that the stories that I had used to manage my life when I was severely chronically ill were now doing damage to me once I had gotten treatment. The stories did not adapt to newer circumstances; I have been needing to compose new ones. This is genuinely hard.)

Some friends and I recently built a story together: for a holiday called Opet, we told the story that for Opet, we do charitable works. We house the homeless, clothe the naked, emboaten the boatless. (And when we were joined by a few folks of a more Celtic persuasion, we also embovined the cowless.) This was a good story. And as part of telling that story, it was not just that we talked about how this would be a good thing to do; the story meant that we did this thing, we went out and we invested in charitable works, we put out resources into the world so that the story became a little more real.

This is what stories do; they organize people around ideas, they make those ideas come a little closer to the surface. Yes, we could have gotten there from a more general story, such as, say, “I am a good person”; people tell those sorts of stories and motivate themselves to many kinds of things. But there’s a lot of other stories you can mean by “I am a good person”, and much like “I am doing the work of God/the gods” as a story, it’s a dangerous one to hang too much on. A lot of things can creep in around the edges of a vague and poorly specified story, really.

Narrative is an essential part of how people construct the world.

Be careful with yours, all right?

And have a happy Opet. 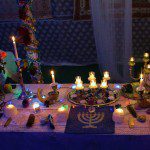 October 10, 2013 Loop of Brighid: Invocation of the Graces, A Brigidine Sacred Text - Part 9
Recent Comments
0 | Leave a Comment
"Thank you for your comment. There are times when the only peace and healing to ..."
Willow Rose Simple Witchery: Right Relation – Holding ..."
"Brianne you are back in Wisconsin! That is so exciting."
Willow Rose Between Two Worlds: Remembering Mabons Past ..."
"Thank you for saying this part: "Let me state unequivocally that there are parents so ..."
Nichole Cardillo Simple Witchery: Right Relation – Holding ..."
"I'm sorry but there is all sort of fear mongering in your blog post. Crossing ..."
Theresa Day Stirring the Brew: Underworld Crossings
Browse Our Archives
Related posts from Agora