Last month, I was invited to join in a fantastic holiday celebration!  Not Mabon. Indeed my Mabon was just bizarre. Instead, flying beneath the cultural  radar of most of the Pagan Channel, was the beautifully upbeat Jewish  holiday of Sukkot.

For those who don’t like my pretty blue links, the basic idea behind  Sukkot is a  harvest festival which celebrates the Jewish peoples return from  their travels  in the desert. Celebrants will construct a decorative hut (called  a Sukkah),  which is adorned with a multitude of colorful bobbles, and  congregate there  to feast and socialize.

This year my wife and I were invited to join an old family friend for a Friday night service in their Sukkah. Now, I don’t really go to many services. I find that sitting through Synagogue is generally very much like sitting through Church, and both have a way of eliciting my most enthusiastic snores. However, out of respect for my wife and her family, I make a point of attending for the holidays. My wife was THRILLED when I said I would go, and kept going on about how I’d never been to a “Renewal” service, and how much I would love it. Imagine my surprise when we arrived at the Rabbi’s home, and the above altar table was the first thing I saw.

Here I was, shaking hands with a Rabbi over her own crystal and candle laden altar, which looked like the product of an overly fluffy unicorn exploding out of Silver Ravenwolf’s “Teen Witch”. Having been made very colorfully aware of the fact that this was NOT my mother-in-law’s Judaism, I turned to my wife for an explanation. She was wearing a mile wide wolfish grin, which is our unofficial couples code for “GOTCHA!!”

As the Friday night Shabbat began, I was on my toes. I was ready for anything now, nothing would surprise me! I’ve learned that the moment anybody uses that phrase, they always seem to be doomed to experience the highly unexpected. Thus I use it regularly, as it tends to make life more interesting. The occasion did not disappoint.

The service began with a bunch of Hebrew prayers and songs I had difficulty pronouncing, which is pretty par for the course for me in these situations. So my next big shock was the invocation of the Goddess. The Renewal movement pays particular attention to the feminine aspect of Yahweh, which is called Shekhina.

Right… Okay now, REALLY ready for anything after that.

Then came the portion of the ritual where the invite the honored guests of Sukkot into the Sukkah. These spirits, called the Ushpizin (masculine) and Ushpizot (feminine) are major figures from the Torah, honored as ancestors. They include: Abraham,Isaac, Jacob, Moses, Aaron, Joseph, David, Sarah, Miriam, Deborah, Hannah, Avigail, Huldah, and Esther. (There WILL be a quiz after this post!) Afterward, a moment was allowed where any additional invitations to passed loved ones could be offered. Now the unicorn summoning, Goddess worshiping Rabbi, had just called up the ancestors to join in the feasting. By now I had decided that things were more than interesting enough, and decided to stop tempting the Gods to make it even stranger.

The Gods apparently decided it was far too late, and that I firmly deserved whatever surprises I got. The Rabbi picked up the Etrog (a lemon like fruit) and a bundle of leaves, and proceeded to give a Hebrew prayer as she turned and waved the leaves in each of the four cardinal directions, as well as above and below. This was followed by a few minutes of silent meditation, during which I officially just gave up on trying to predict what might be coming next.

After the show I ended up sitting next to a psychic/holistic healer/mystic, who loved crystal work, sage smudging, and the spiritual energy raised in drum circles. Here was the single most WICCAN individual I’ve ever met in my life, and she was Jewish… Finally I just couldn’t help myself and I expressed a thought that had been on my mind all evening.

“You guys seem to have a LOT in common with the Neo-Pagan community.”

Here was a group that was a minority within a minority, which had SO MUCH in common with the Wiccan community. Two communities that had so many common goals and rituals; and neither of these groups knew the other one even existed. I later asked a Wiccan friend of mine if they were familiar with Renewal Judaism. What I got in return was:

Sometimes we set out to find our allies, those of kindred spirit and like mind, and we find our list of friends seeming thin. Other times we brace ourselves before dealing with the outside world, and instead we find friends in wyrd places.

P.S.- To my many Wiccan friends and readers, I think we all can agree that a bit of lighthearted poking at Silver Ravenwolf’s ilk is always good clean fun, and I hope you’ll forgive my many Unicorn references 🙂

However I was SO not over-exaggerating the glitter! 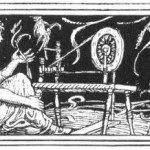 October 4, 2013 Hills of the Horizon: Narrative Theology I
Recent Comments
0 | Leave a Comment
"Thank you for saying this part: "Let me state unequivocally that there are parents so ..."
Nichole Cardillo Simple Witchery: Right Relation – Holding ..."
"I'm sorry but there is all sort of fear mongering in your blog post. Crossing ..."
Theresa Day Stirring the Brew: Underworld Crossings
"I'm doing a college paper in my history class about paganism making a come back. ..."
Alex Route Hearth of Hellenism: The Greek Wheel ..."
"One night driving home through the country, two coyotes ran across the road in front ..."
Wolf Stirring the Brew: Underworld Crossings
Browse Our Archives
Related posts from Agora