Welcome to the first installment of Heathen Woman! This will be a bi-weekly column that focuses on topics that are relevant to heathen women and the roles they assume in today’s modern society.

Today, I’d like to talk about representing ourselves, and begin with a personal story on how that matters to us as heathen women. I have a shirt with a huge Mjolnir on it. Most people don’t know what it is when I’m out in public, but I wear it with pride – a sign that I am a heathen. I wear my hammer around my neck as well every day, so with the shirt on I feel ten feet tall. Occasionally, a person will approach me and ask about the hammer. I tell them, “I am Asatru, and the hammer is a sign of my faith.” It’s an easy way (I think) to explain it quickly that will hopefully have them going home and typing “Asatru” into a search engine. Maybe it will lead them to read the history of the Indo-European people, or even stir up something inside of them that leads them down a new path. A girl can hope, right? Realistically, though, most people just shrug and look no further.

Heathens, especially heathen women, want to be acknowledged for their strength, their independence, and their voice. How I represent myself reflects my voice and faith, so in order to convey those things, I need to be mindful of how I come across. For instance, if wearing my shirt only serves my own pride and does nothing to draw positive attention to the values that I want to display, then I haven’t really done anything to increase awareness of the positive traits of being a heathen. Furthermore, if I only confuse people, the point of what a heathen woman represents has been lost.

That brings us to how we converse with others. If I begin a conversation in an accusatory manner that instinctively puts others on the defense, then they’re not going to listen much of what I have to say, regardless of whether my position is historically correct, promotes tolerance, or otherwise endorses the strength that all women possess. People like to be spoken with, not to. A shirt like the one I mentioned is essentially speaking “to” them if I don’t take the time to accurately address their questions, but rather go for the short, quick, answer like the one I mentioned. I could write down a reputable website for them to look up. If there was time, I could explain the Nine Noble Virtues or ask them questions about their faith and what they do, and do not, like about it. There are several options, but I need to be open to addressing them when the time arises.

So how can a heathen woman represent herself in a way that gives a voice to her character and faith, while getting others to respectfully take notice and listen? We can involve ourselves in discussions that are focused on educating, not arguing. Most people have a general overview of history, even the bad parts that we don’t like to remember. When the blame game begins, and we as heathens start tossing out cards that assign accountability for crimes that modern day people did not commit, then others become defensive. Instead of going backwards, focus on going forwards. Share the lore with them. Invite them to meet with friends that have a like mind. Include them in an invitation to an open blot or other heathen celebration. Involve them. Let them see with their own eyes that perceived differences and negative connotations are false. Afford others an open door from which they can learn.

Secondly, if we use the standards of our gods to live our lives by, then we see the chance to talk to people from every walk of life. Odin traveled far and wide to gain wisdom and learn how to apply it. He had many roles in addition to the head of the Aesir. He was a teacher, traveler, shaman, friend, guide and so much more. While we are human, and not gods, we can certainly try our best to walk in the same direction that they traveled. This serves two purposes: we grow as people and we learn even more about the way of the gods. Others in turn learn from, and through, our actions. When we speak, as the Hávamál suggests, we should attempt to do so mindfully with words of value. It may seem like we are catering to the comfortable perceptions of others who do not share our faith, but in actuality we are representing our faith through actively demonstrating our values. Openness, tolerance, conversation, compassion, and truthfulness are inherent qualities that can be found in all of our gods and goddesses.

As a woman, this advice stands as well. We can become naturally defensive when we feel that we are being spoken down to by someone not of our faith. We may also feel this way when we feel like we are not being heard simply because we are women. One of the best ways to combat this isn’t with a louder voice, but with a strong one. A tone that conveys education and knowledge is difficult to argue with. Some people will argue regardless, but some people would argue with the statement that the sky is blue! The Hávamál says that it is essentially useless and ill-advised to spend more than three words arguing with someone of that mindset. Perhaps that person will one day open their mind to another perspective, and that would be a better time to have a conversation.

These approaches will hopefully help us use the seeds of yesterday to bring forth a harvest today: one that promotes a well-balanced way of conversing with, and educating, others. Along with a healthy dose of humor and personal confidence, it builds a foundation of active communication from which we can build. 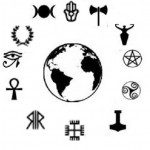 October 31, 2013
Wyrd Words: Defined but not Confined
Next Post