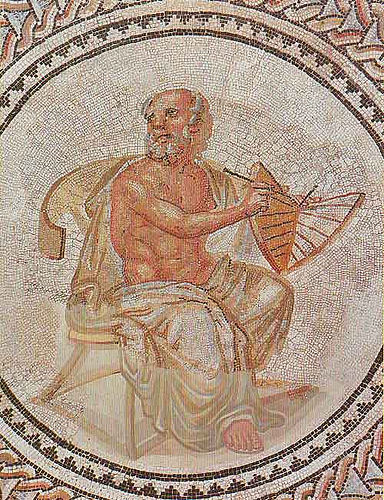 There are those who believe Naturalistic Paganism is but a modern thing, a young sapling in the forest of Paganism.  In this article, the truth about its age is discovered.

So far, we’ve investigated the history of naturalism from prehistoric hunter-gatherers all the way through archaic Egypt, Mesopotamia, and Greece.  We’ve seen that the worldview of naturalism was unlikely throughout these periods and cultures, yet the seeds for it were gradually sown over time.  So, when and where did naturalism finally blossom forth?

Most historians, if they recognize naturalism in the ancient world at all, agree that it began with the Ionians.*  Yet most histories of naturalism leave something out: they typically employ vague definitions of naturalism that rely on an ill-defined concept of nature.  Furthermore, to my knowledge, there has never been any research into the combination of naturalism and Pagan religions.  This article, in addition to investigating the naturalism of the Ionians, will contribute two new aspects to the field: the Ionian concept of nature, and the question of Ionian Naturalistic Paganism.

Thales and the Ionians

Naturalism first appeared around 600 – 500 BCE, at the very end of the Greek archaic period, on the west coast of modern Turkey.  This region, called Ionia after the tribe of Greeks who lived there, gave birth to several generations of thinkers who approached old questions in a new way.  They wondered about the nature of the world, where it came from, and how it developed.  Such questions had been asked since time immemorial, and the answer had almost always involved the personal action of some deity, spirit, or powerful ancestor.  Yet the Ionians took a different approach: they attempted explanations completely without reference to such agents.

The first of the Ionian thinkers was Thales of Miletus (624-546 BCE).  Educated by an Egyptian priest, he made advances in many fields, including geometry, business, navigation, magnetism, and astronomy.  He is reported by Herodotus to have predicted a solar eclipse.**  For his use of principles and hypotheses he has been called the father of science (Needham, 1978; Singer, 2008), and on him Bertrand Russell  (1945) bestows no small honor: “Western philosophy begins with Thales.”

Amidst all these achievements, he is perhaps most famous for his speculation that all things are ultimately composed of water.  Basically, Thales suspected things were made up of one essential element changing shape to create all the varieties of things in the world.  This was the beginning of speculation on the ultimate substance or substances underlying the world, a tradition which is continued by today’s nuclear physicists.  In fact, Thales and his successors were called the physikoi, or physicists, because they investigated the world according to its physis, or nature.

We’ve seen this word physis before, and it holds the key to what was so radical about Thales’ idea.  Physis describes the origin and development of a thing of its own accord, and that is the principle by which Thales’ world of water proceeded.  In his theory, there is no mention of divine agents creating, directing, or molding the process; it happens on its own.  This vision of an inherent order unifying nature is what E. O. Wilson (1998) calls the “Ionian enchantment.”

Thales was succeeded by several generations of Ionian physikoi who revised or elaborated his views.  Anaximander called the primary substance the indefinite (to apeiron), while Heraclitus called it fire, and Anaximenes air.  Later schools also picked up on this tradition: Parmenides postulated being and nonbeing, Anaxagoras nous or mind, and Empedocles the four “roots” or elements: earth, air, fire, and water.  All these philosophers speculated on the nature of nature itself, without invoking gods to do so.

Yet what was this thing they called “nature”?  It would be a gross mistake to assume they meant the same thing as we do today.  We need to look into the “nature” of the Ionians.

A naturalistic concept of nature?

Modern naturalism depends crucially on a specific concept of nature characterized by impersonal physical laws.  Was the view of nature held by the Ionians similar to this or different?

There is room for skepticism on this point.  The primary substance(s) speculated by the Ionians certainly sound impersonal and physical, but objections have been raised.  For example, Anaximenes’ to apeiron has been argued as a kind of god veiled in abstract terms.  Meanwhile, a century later and in a different school, Anaxagoras would make the primary substance nous or mind, which no longer sounds very impersonal or physical.  One cannot help but wonder if the earlier Ionians did not also have some tinge of this personal and non-physical quality as well.

Nevertheless, at the end of the day, it seems most reasonable to take the Ionians at face value when they appear to describe nature in impersonal, physical, and law-like terms.  They spoke of nature as impersonal, i.e. developing without the intention of any agent, physical, i.e. composed of a substance often likened to such tangible realities as water, fire, or air, and law-like, i.e. operating according to universal principles.  This suggests their concept of nature was quite similar to that of modern naturalism.

We can conclude with reasonable confidence, then, that the Ionian physikoi were indeed naturalistic.

Some would say yes, as a matter of course: the Greeks of the time were Pagans, so any Greek naturalists must have been Naturalistic Pagans.  However, by Naturalistic Paganism I mean something considerably more complex than mere membership in a Pagan culture, however.  I mean active practice of a Pagan religion while holding naturalistic views.  So, we need to look at specific religious practices.

Unfortunately, evidence for the religious lives of the physikoi is sparse and indirect.

Thales is reported by Aristotle to have said “The world is full of gods”, but both the meaning and authenticity of this statement is contested.  If Thales did say it, he may have been indicating a kind of soul pervading and directing all things, which would not have been very consistent with his otherwise naturalistic philosophy.  On the other hand, he may have been referring to the movement of lodestones or magnets, suggesting that the capacity of motion is inherent in nature.  Either way, regarding the religious practices of Thales, the statement leaves us with more questions than answers.

Other physikoi are equally obscure regarding religion.  They were remembered primarily for their philosophical ideas, not their religious ones, so little of the latter made it into the historical record.

This marked absence may itself be a clue, however.  Most later ancient philosophers did take part in their culture’s religion, regardless of their philosophical beliefs, so any failure to do so would likely have stood out markedly.  Had the Ionians rejected their culture’s religion, they would have been remembered for such eccentricity, yet we find no references to atheism or impiety.***

This suggests, albeit indirectly, that the Ionians did, in fact, lead reasonably normative religious lives.  We can hesitantly conclude, then, that the Ionian philosophers were the world’s oldest Naturalistic Pagans.

In articles to come, the history of Naturalistic Paganism will be further traced through Classical Greece and on to the Hellenistic era.  We will find that the evidence becomes increasingly clear as time goes on: there were Naturalistic Pagans in the ancient world, just as there are today.

Naturalistic Paganism is as old as most world religions today

Naturalistic Paganism is no young sapling; it is an old and mighty oak.

*While there are many studies of naturalism (e.g Furst and Skrine, 1971; Goetz and Taliaferro, 2008; Plantinga, 2011), including Religious Naturalism (e.g. Stone, 2008; Hogue, 2010), there are actually precious few that address the history of ancient naturalism.  Histories addressing ancient atheism (e.g. Thrower, 2000) or doubt (e.g. Hecht, 2003) are more abundant, but lack the crucial analysis of the term “naturalism” and its relation to the concept of nature.  Meanwhile, Popper (1963) sees the Ionians as the origin of Western science, though he does not extend comment to the origin of scientific naturalism.  For histories specifically addressing ancient naturalism, see for example Prado (2006) and Clark (2007).  As for research into Naturalistic Pagan religion, there has been much on the influence of religion on Ionian naturalism but none, to my knowledge, on the influence of naturalism on Ionian religion.

**There is doubt about the accuracy of this report, however (Panchenko, 1994).

***Not till later, in the 5th century, do we find philosophers charged with impiety or atheism, starting with Anaxagoras and proceeding later to the famous indictment of Socrates.  Even these charges do not necessarily indicate a positive denial of the existence of gods, however.  Rather, they often suggested deviation from normative interpretations.  In effect, “atheism” was denial of the traditional gods of the people, not religion per se.

November 4, 2013 Birthing Hereditary Witchcraft: Family Coven?
Recent Comments
3 Comments | Leave a Comment
"Congratulations on 5 years! Here's to many more. I'm a trans man, and I've found ..."
Loucke Between Two Worlds: 5 Years Blogging
"Love ya Bri!"
Jason Mankey Between Two Worlds: 5 Years Blogging
"Great insights, Martha. You know that with my agnostic leanings I have a different concept ..."
Willow Rose The Corner Crone: Hekate of the ..."
"A sincere thank you for sharing this. I so appreciate the opportunity to understand others's ..."
Willow Rose Between Two Worlds: Anna, Another Lesson ..."
Browse Our Archives
Related posts from Agora