Seekers and Guides: Learning the Language – The Purpose of Symbology in the Craft 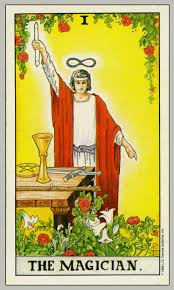 When I started studying Witchcraft in the late ’80s and early ’90s, there were about twenty books available that you had to get.  One of them was Aleister Crowley’s complex list of correspondence tables 777.  Corresponding symbols were an essential part of Witchcraft and Magick.  You were expected to memorize the meanings of either Theban script or Elder Futhark, all the correspondences for planets and days of the week, the zodiac signs, the elements, colors, and phases of the moon, for a handful of basics.  You were then supposed to move on to a complex knowledge of the Kaballistic Tree of Life, the sacred trees of Druidry, and the Tarot.  Then you worked with incenses and oils and herbs.  And so forth.  Part of the reason that you kept a Book of Shadows was so that you could copy these lists into them for reference, and also so that you could memorize them.  Just as it was in school, you were making notes for the purpose of study.

In the age of Google, I’m pretty sure no one but the most hard-core does this anymore.  Why copy this information down into a book when you can just find it on Wikipedia?  In past days, when you wanted to create a spell, you had to try to find a reference book in the first place (which nobody was selling, often not even metaphysical stores, due to the Satanic Panic); then you probably had to take it out of the library because it was printed on leather and vellum or in an enormous color-plate illustrated hardcover and unless you were wealthy you couldn’t afford it; then you copied it diligently into your Book of Shadows so you could reference it later; and we all know how good most of us are with our reference systems!  Memorization really was in your best interest, but not so now.  At least, not apparently.

I bet this is starting to sound like a crusty “things were better in the old days” post from one of those old school BTW types (which is a reputation I am beginning to accumulate in some circles, it seems), but it isn’t.  I love Google!  As a Witch and a writer, I don’t know what I ever did without it.  The information exchange and the wide range of options and knowledge in Paganism that has resulted are bloody brilliant, if you ask me, and I wouldn’t change it for a second!  But I have noticed something.  I have noticed that not as many of us practice magick these days.  And I have noticed that often the ones who do are often not as effective at it as some of the old school types.  Now granted, this is a generalization and it’s based entirely on my personal observation; so maybe it’s different in different circles and maybe I’m just seeing things differently.  “What’s the point,” my younger students ask me, “of writing in my Book of Shadows?  Can’t I just print it off the internet?  Why waste paper?  Why copy it in the first place when I can just Google it?  What about the Law of Attraction?  Can’t you just think positive thoughts and make them happen?  Why bother memorizing it at all?”

This is the point.

In her groundbreaking sociological work Persuasions of the Witch’s Craft, T. M. Luhrmann writes of a field study she conducted of England’s occult community. In it, she noticed that a Witch’s perceptions slowly shift during the course of her studies in magick to see different symbols and meanings in events, experiences, and responses to the world. Prior to occult study, these connections and interpretations would not have been made. Luhrmann called this “interpretative drift,” and she viewed it as the process of overcoming skepticism. She ultimately found it impossible to maintain the detached perspective of the anthropologist and continue occult studies.

Eleven years later, anthropologist Susan Greenwood published Magic, Witchcraft, and the Otherworld: An Anthropology. Greenwood undertook the study of occultism in earnest in her field research, rather than approaching it as an outsider, and treated it like “learning the language” of another culture, complete with that culture’s framework and comprehension. She saw the occult community’s view of the otherworld, which coexists with the rational world of science, as another form of “knowing,” and one did not have to be rejected to embrace the other. This view was also shared by Carlos Castaneda, and it is beginning to gain more common acceptance in the field of psychology, where tools such as guided meditation and visualization are being incorporated into mainstream psychological and therapeutic practice.

“Interpretative drift” is exactly what you want to achieve in the study of the Craft. When you learn to speak the language, and when understanding the language becomes second nature and you begin to see its symbolism in everyday life, you will be able to work your magick, and thus create change in the world according to your Will, more effectively.

The correspondence tables and the common symbolism of the Western occult tradition is a language of symbolism.  Learning it allows you speak to the subconscious mind, and through that, the Universe, to communicate a specific desire. It’s like learning the language of manifestation. Using it makes it easier to communicate to the Universe what you want. The study and practice of this symbolic language is called “the Art” or “the Craft” for a reason.

Think of it like this: you want to travel to a foreign country where they do not speak English.  The basics of meditatively exercising your Will and the essentials of spellcraft are like studying a smattering of French in school before you go to Paris.  You’ll be able to make your way around, sure; but you will be poorly understood, communicating may take time, there are likely to be misunderstandings on both sides which could be either frustrating or disastrous, and often you will have to resort to ponderously making your way through your French-English dictionary and playing Charades.  You will do much better if you study right up to the twelfth grade (I did, and I managed pretty well when I went to Montreal), and you will do better still if you studied French Immersion or come from a bilingual household.

Charles Poncé proposed in his book, The Game of Wizards: Roots of Consciousness and the Esoteric Arts, the idea that magick is simply a way of mapping the complex psyche of the human mind. If that’s true, the symbolism us

It’s a spiritual “shorthand” really.  You can write out an essay trying to explain what “love” is.  Or you can draw a heart and know exactly what you mean by that.  The second is less time-consuming and probably clearer. Even if you believe that magick is entirely about psychology and altering your experience with reality by altering your conscious and subconscious expectations, learning the lingo still has value.

Why Memorize When You Can Google?

Because it just doesn’t have the same effect if you don’t have it fixed in your mind already.  The meaning isn’t as clear.  The grammar can get garbled and there could be glaring errors in the translation.  Have you ever tried translating something into Google Translator, and then translating back?  Generally the English is barely comprehensible in the first place, and by the time you re-translate it, it’s utter gibberish.  Magick can be like that.

Let’s look at it another way.  Have you ever eaten homemade bread?  Good, right?  Have you ever eaten Grandma’s homemade bread and then tried to make it from her recipe?  Not quite the same, is it?  That’s because she’s got a special touch, informed by her understanding of the ingredients and her years of experience.  You can follow the same recipe by following the instructions in a book, but often it’s just not the same, is it?  So your encyclopedia of spells is like a bunch of bread recipes.  Good enough if you just want to make something quick to impress your date with.  But if you want to be a real baker, you’ll play with the ingredients and experiment until you can just look at the bowl and throw in what’s needed without measuring, stir it up and kneed it for just the right amount of time, and bake it so that it comes out as a steaming buttery vision of fluffy, yeasty perfection (like my mother-in-law’s).

Just a little (if you’ll pardon my pun) food for thought!

Sections of this article have been paraphrased from my upcoming book, The Witch’s Eight Paths of Power: A Complete Course in Magick and Witchcraft (Red Wheel/Weiser: September 2014).

Next column: Wicca Has No Gurus, Just Teachers

P.S. – for anyone who cares, I weighed in earlier in the week on the “Wiccanate privilege” discussion at my column at PaganSquare, 49 Degrees: Canadian Pagan Perspectives.  I didn’t repeat it here because it has little to do with the focus of this column.  But feel free to have a glance and comment if you wish!  I welcome open and respectful discussion. 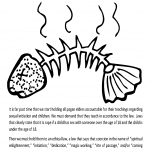 March 29, 2014
The Fish Rots from the Head Down: Squid Eye and Sexual Exploitation
Next Post

April 1, 2014 The Busy Witch: Refilling the Well
Recent Comments
0 | Leave a Comment
"Thank you for saying this part: "Let me state unequivocally that there are parents so ..."
Nichole Cardillo Simple Witchery: Right Relation – Holding ..."
"I'm sorry but there is all sort of fear mongering in your blog post. Crossing ..."
Theresa Day Stirring the Brew: Underworld Crossings
"I'm doing a college paper in my history class about paganism making a come back. ..."
Alex Route Hearth of Hellenism: The Greek Wheel ..."
"One night driving home through the country, two coyotes ran across the road in front ..."
Wolf Stirring the Brew: Underworld Crossings
Browse Our Archives
Related posts from Agora