How a Jewish Witch is Formed

My history is a history of wandering. My people have wandered from the Middle East to Spain to Poland and Lithuania to Los Angeles. I’ve wandered from Witchcraft to Buddhism to Judaism and back.

I first discovered Witchcraft in high school, when a friend of mine told me she was a Witch. I gave her the predictable response: “Does that mean you worship Satan?” She said no, it meant she worshipped nature. I remember how instantly, how easily, my idea of Witchcraft changed. Almost as if I’d known the truth all along.

A short time later, I found Robin Skelton’s The Practice of Witchcraft Today in a bookstore and my dad, Jewish by birth, bought it for me as a gift. He belongs to an alternative religion, too, so he knew how it felt to wander. I’m still grateful to him. It’s not a good book but I still have it, almost two decades later.

But in college, my views of Witchcraft and Paganism started to sour. I met too many people who believed they could cause snowstorms, who used the line “I’m an empath” to pick up girls, who claimed that packs of spirit wolves were following them around. My college Pagan group had no chaplain or mentor–we were a bunch of teenagers improvising a religion. The only books bookstores ever sold were the 101 guides, and so I came to the conclusion that Paganism didn’t go any deeper. I left.

I studied Secular Buddhism and began to meditate. Then, pulled by a desire to connect with deity, I began to learn about my Jewish heritage. I’d never gotten a Jewish education as a child; my father wasn’t really interested in it, and my parents divorced when I was young anyway. I started going to High Holy Day services. I learned prayers. I began to observe Shabbat: the weekly day of rest, commenced with the lighting of candles and the recitation of a prayer. Barukh atah Adonai, Eloheinu, melekh ha’olam. Except I replaced Adonai with Shekhinah: the feminine name of God, or the Goddess. It was fairly easy to find prayers that used the corresponding feminine pronouns and case changes. Turns out there are lots of Jews who are devoted to the Goddess.

But in the end, full-fledged Judaism just didn’t work for me. If you look at many Jewish communities, you’ll notice an interesting pattern: an inordinate number of us identify not as Jews, but as Jubus (Jewish Buddhists), Hinjews (Jewish Hindus) and Jewitches (I’ll let you piece that one together). I think there are a few reasons for this pattern. One is that we value studying and questioning and learning so much that we often study and question and learn ourselves right out of our own religion. Another is that Jewishness is as much an ethnic and cultural identity as a religious one, so the idea that one would stop being Jewish by leaving the religion doesn’t really make sense to a lot of us. We’re shaped by our languages, our foods, our families, our histories. When we refer to ourselves as a tribe, we’re speaking literally.

Another reason why so many of us hybridize our spiritual practice rather than just leaving Judaism is that as much as there is about the religion that’s frustrating –the patriarchy, the abundance of laws and scarcity of myths, the brainwashing that occurs around the occupation of Palestine–there’s a lot to love.

I finally let myself return to Witchcraft after I gave birth to my daughter. Nine months after I gave birth, to be precise, although there was a long and gradual lead-up. I found a better, more grounded and serious community (being an adult helped immensely with that). I re-dedicated myself to the Goddess, got involved in my local Reclaiming group, and began to work with Cernunnos and the Morrígan. I encountered real Pagan theology, much of it here on Patheos. I can’t express the relief I felt upon coming back. I’m glad I took my hiatus, but oh, how wonderful it was to come home.

But there were aspects of Jewish practice that I didn’t want to leave behind. Lighting the candles on Friday nights and devoting Saturdays to self-care didn’t conflict with Witchcraft. In fact, the candle-lighting ceremony is so spell-like that the two felt indistinguishable. Every Friday at sundown–that liminal time when magic is strongest–I set an intention and change my consciousness through Will. Why on earth would I give that practice up?

My name is Asa, and I’m a Jewish Witch. This column will explore what exactly that means: how I incorporate Jewish tech into my practice; how I navigate two distinct identities and communities; how I attempt, and sometimes even succeed, to reconcile my people’s stories with my lived reality. I’m honored and thrilled to be here. I’m more Witch than Jew–I seldom fork over the money for High Holy Day tickets, but I would never skip a Beltane ritual–but I hope my posts will scratch away, maybe just a tiny bit, at the barriers between the Abrahamic religions and earth-based spirituality. If you’re curious about Jewish Witchcraft, you might take a look at these resources: kohenet.com, jewitchery.com, or Magickal Judaism.

The other day my daughter, now a toddler, joined me as I tended to my altar. She picked up my East/Air candle, set it back down, and then covered her eyes and emitted a stream of babble. She was imitating what I do when I light the Shabbat candles. She looked at me to see if she’d done it right.

I laughed. I felt a swell of joy. Yes, I said. Yes, you did it exactly right. 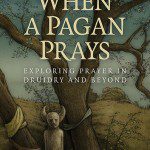