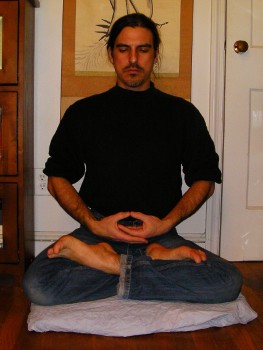 So the last edition of “The Zen Pagan”, on “Wild Naked Pagans”, attracted a few thousand hits the first weekend it was up. I don’t know if we’ll draw that sort of crowd this month. We’re going to be a little bit more sedate, at least on the outside, as we focus on the “Zen” part of “Zen Paganism” and discuss the wild practice of getting in touch with the naked mind… by sitting perfectly still.

That might seem like a contradiction. And perhaps it is — this is Zen we’re talking about after all, a path known for paradox. But anyone who thinks meditation practice is tame should consult the legends of the Buddha’s enlightenment. Here’s how Paul Carus, an early Western scholar of Buddhism, summarized the legendary encounter between the meditating Buddha and the tempter demon Mara:

Mara caused a whirlwind to blow, but in vain; he caused a rain-storm to come in order to drown the Buddha, but not a drop wetted his robes; he caused a shower of rocks to come down, but the rocks changed into bouquets; he caused a shower of weapons–swords, spears, and arrows–to rush against him, but they became celestial flowers; he caused a shower of live coals to come down from the sky, but they, too, fell down harmless. In the same way hot ashes, a shower of sand, and a shower of mud were transmuted into celestial ointments. At last he caused a darkness, but the darkness disappeared before Buddha, as the night vanishes before the sun. Mara shouted: “Siddhattha, arise from the seat. It does not belong to you. It belongs to me.” Buddha replied: “Mara, you have not fulfilled the ten perfections. This seat does not belong to you, but to me, who have fulfilled the ten perfections.” Mara denied Buddha’s assertion and called upon his army as witnesses, while Buddha declared: “I have no animate witnesses present;” but, stretching out his right hand towards the mighty earth, he said: “Will you bear me witness?” And the mighty earth thundered: “I bear you witness.” And Mara’s elephant fell upon its knees, and all the followers of Mara fled away in all directions. When the hosts of the gods saw the army of Mara flee, they cried out: “Mara is defeated! Prince Siddhattha has conquered! Let us celebrate the victory!”[Carus]

(The idea of the Buddha appealing to the Earth for support is certainly interesting for people interested in so-called “Earth religion”, isn’t it? We’ll come back to that some other time. Or, if it’s not too crass a suggestion, you could buy and read my book. )

We don’t need to believe that demons like Mara have a physical existence outside of our own minds and culture in order to recognize the truth of this encounter. There’s some wild stuff inside our heads, beautiful and terrible to behold. And there are many systems that claim to offer guides to the territory, or that claim to have a sure-fire way to tame the wild. From ancient yogic practices to Western ritual magic to Timothy Leary’s Eight Circuit model of the brain, detailed maps and systems abound.

But there’s another way to approach the wild. That’s to go in without paying too much attention to the reports of others and take a look for yourself, to appreciate it for what it is.

There’s both a risk and a reward to that. You might miss someone’s advice about a must-see sight, or their warning about a hazard. But you also won’t be bound by outdated or inaccurate reports. You won’t fall prey to rumor, or be biased and see only what you’re told to see. You’ll have a chance to see for yourself things as they are, without a narrative or values imposed by someone else.

To do this takes some trust both in our own ability and in the nature of the territory. We can’t do this if we’re afraid of the wild.

Should we be afraid?

That is certainly the message of some religious paths and philosophical schools. You, in the wild state, are wretched. (That’s why nakedness is sinful. Cover your shame!) The universe is wretched. Left to its own nature life is solitary, poor, nasty, brutish, and short, a war of all against all, sinners in the hand of an angry God, headed straight for Hell at any moment, and only Divine — i.e., Super-Natural, Unwild — Intervention can save us.

Zen, thank goodness, takes a different view. Yes, the Buddha started with the premise that life is dukkha — a word usually taken as meaning “suffering” but which has also been translated as “out of joint”, in the sense of a slipped axle or a dislocated shoulder. That could sound like an echo of the “wretched universe” school, but the Buddha proceeded immediately to see the end of suffering as within our reach through a fairly simple (difficult, certainly, but simple) program of right living and right thinking, without Divine Intervention.

And Zen draws also on roots in the naturalist philosophy of Taoism, which found perfection in untamed nature and sin in the artifice of civilization. Between its Indian Buddhist and Chinese Taoist roots (and a bit of spice thrown in from Japan) Zen has developed the attitude that our fundamental nature, just as it is, is enlightened Buddha nature.

As one of my favorite Zen lunatics, Ikkyū, put it, “don’t worry please please how many times do I have to say it / there’s no way not to be who you are and where”.[Ikkyū, 33] Or as the 20th century Zen master Shunryu Sukuki once told his students, “Each of you is perfect the way you are…and you can use a little improvement.”[Chadwick, 1] There’s a little Zen paradox for you, but the important thing is that there is nothing to worry about. You are already perfectly who and where you are.

And so we can trust the wild of our own mind, without imposing someone else’s structure on it. As Gary Snyder said, “[Wild] means self-organizing. It means elegantly self-disciplined, self-regulating, self-maintained. That’s what wilderness is. Nobody has to do the management plan for it. So I say to people, “let’s trust in the self-disciplined elegance of wild mind”.[Carolan]

We can go into the wild and just sit and watch.

If this has whetted your appetite for more information about meditation in the Zen fashion, there are plenty of books out there that talk about how do it…including, surprise, surprise, my own Why Buddha Touched the Earth.

And you can subscribe to The Zen Pagan via RSS or e-mail. 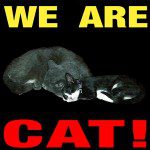 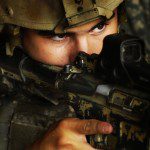 October 11, 2014 Making Light: Ares
Recent Comments
0 | Leave a Comment
"Thank you so much, Terrance, for the kind review! I appreciate it and glad you ..."
Madame Pamita Pergamum Unfurled: Review – The Book ..."
"The Halloween Tree and Song of the Sea are wonderful for kids, with more of ..."
Lina Irish-American Witchcraft: 31 Movies for Halloween
"Halloween always sounds so cool in America."
JamieAdStories Outside the Circle: The Dark Legends ..."
"I needed to read this. Thank you so much for sharing this. <3"
Laurie Allen The Corner Crone: The Parable of ..."
Browse Our Archives
get the latest updates from
Agora
and the Patheos
Pagan
Channel
POPULAR AT PATHEOS Pagan
1