A recent article by Dagulf Loptson called “What is Heathenry Missing?” addressed a topic I’ve been hearing a lot recently in online Heathen circles. Dagulf expressed a common complaint that Heathenry lacks any kind of unbroken chain of tradition. He argues that people often leave Heathenry because too much has been lost, and our current traditions are incomplete. Now this article did raise a number of good points and I encourage people to take a look at it, but I respectfully disagree with the author’s premise. Heathenry was broken, but Heathenry is very much alive.

I’ve heard this idea before and people often site examples of other religions with supposedly unbroken lineages. The problem is that this is most often an illusion that can only be seen from the outside looking in. Judaism is a perfect example of this. From the outside it’s easy to see a religion spanning back thousands of years. In actuality however, the ancient practices of temple era Judaism look nothing like the modern religion. They might as well be two completely different faiths. Similarly, modern Hinduism (One of the world’s oldest living religions) may have its roots in the ancient Vedic practices, but it has grown into a very different set of faiths since then. From the outside it is easy to see these groups as unified and unbroken, when in reality they are both diverse and ever changing

Somewhere along the lines people decided that ‘History’ has stopped and now tradition must be artificially preserved in a static state. That’s not how religions work. Communities are constantly changing, and just as language or cuisine might shift to accommodate new ideas and technologies, so too will the beliefs and traditions of that community adapt. Once upon a time even our most ancient and sacred traditions were new. They developed naturally, over time, as local communities accepted and discarded rituals as the need arose.

The natural progression of Heathenry was interrupted by the Christianization of Scandinavia just as surely as Judaism was by the destruction of the Temple. It changed us. Much of our Lore and ritual was lost and may never be fully regained. But we made a comeback; Heathenry is a living faith.

Just as surely as our history changed us, we have also changed ourselves. We are not lacking, we are simply growing, and much like our ancestors most of this growth happens at the local, ‘tribal’ level. The idea of a unified and homogenized ancient Heathenry is just as much an illusion as a singular form of Hinduism. It didn’t exist, and never has. The life and vitality of the Heathen traditions CAN be found, but they cloak themselves in the guise of local rituals, and family traditions, passed on orally from one generation to the next just as the ancients did.

The feeling of ‘incompleteness’ is an illusion born, at least in part, by the advent of solitary Heathenry. In an age where many of us don’t have a local community and can only interact with our coreligionists via the internet, we often find ourselves alone and adrift. Without the living traditions of a real community, all that’s left to us are the bones of a faith that hasn’t been practiced in that way for the better part of a thousand years. Is it any wonder that it feels incomplete? No religion can be accurately understood simply by reading its ancient texts. Hinduism has become so much more than just practices described in the Vedas. Judaism has grown beyond the priestly rituals described in the Torah. Christianity looks nothing like the earliest incarnations of the church and it’s not even all that old. Heathenry is no different. If you want to know what the faith actually looks like, you have to look at the PEOPLE, not just the books. Books preserve religion. People preserve faith. Heathenry is a communal tradition, it doesn’t exist in a vacuum.

In a very real way, one cannot be a Heathen alone.

Whether the community is online, in person, or via a band of pen pals, living traditions require living conduits. To utilize a common and oddly appropriate phrase: It takes a village.

So how do we change this all-too-common phenomenon? In a time when so few of us are born into the traditions, and may not be able to find a local Kindred to join, how do we help these solitary Heathens discover the real depth of our rituals and philosophies? Aside from building more long lasting communities, we can share the rituals and beliefs of our local groups in the same way our ancestors did. Traditions spread by contact, as much by art and music as any deep discussions of faith. We can share the beauty of our practice with the world like the skalds of old, carrying the spark of tradition from village to village.

One log takes fire from another
until it is consumed.
A spark is kindled by another spark
One man gains wisdom by speaking to another
and foolishness is born of silence
–Hávamál: Stanza 57

January 20, 2016
Dandelion Seeds: The Call of the Swan Maidens
Next Post 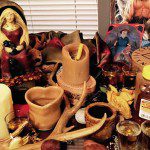 January 22, 2016 Happily Heathen: Offerings For The Gods - Part One - The Vanir
Recent Comments
0 | Leave a Comment
Browse Our Archives
Related posts from Agora