Irish-American Witchcraft: Being Dedicated to the Morrigan – Part 2 – Following Them

Irish-American Witchcraft: Being Dedicated to the Morrigan – Part 2 – Following Them March 1, 2016 Morgan Daimler

I’m going to start this out by saying that I do tend to believe that the Gods and spirits are real beings, independent of humans and with their own personalities and agendas. I say that because I know that not everyone shares this view but to understand my experiences and journey over the last decade or so as a devotee of the Morrigan you have to understand the way that I approach believing in Them – whether you share that approach or not. Quite frankly I think its less important that we all have the exact same views and understandings of the Gods as that we are able to at least try to see things from other people’s points of view, which is what I’m asking you to do here.

So, in my last blog where I talked about finding the Morrigans – Badb, Macha, and Morrigu, that is – I mentioned that this finding came through the medium of Shadow work. At the end of this work, or at least when the 6 months we’d planned for it was over, I had received a message during a group meditation/Journey where They, collectively, told me that what I was meant to do for Them was to be a healer. You could say I wasn’t happy to hear this and you’d be underestimating my reaction by half. You see I’d always fancied myself quite the diviner and I’d spent many years learning a variety of divination methods to a point that I thought I was very good with them. I took in pride in my skill, and while I had some small interest in healing¹ it wasn’t anything I could picture myself really focusing on.

You know that expression about assuming?

You see when I was told I needed to focus on healing I assumed that meant physical, practical healing. Like fix a broken arm healing or even the more new age re-balance someone’s energy healing. And that was just about the last thing I wanted to dedicate my life to doing, even in service to a trio of Goddesses. I wasn’t even questioning why that particular grouping would want me, of all people, to be a healer – I was too busy making faces and groaning. Ugh.

I did start learning a wide array of healing methods though and started really studying magical healing work from a traditional witchcraft and Druidic perspective. I even briefly looked into massage therapy school (really not for me by the way). I started trying to do more magical healing, at least, and it wasn’t like it was horrible but it definitely wasn’t making my soul do cart wheels of satisfaction either. I felt frustrated, more than anything, but I was trying to trust that ultimately They were taking me where I needed to be.

But, during this period an interesting thing was happening. Although very few people at that time knew I honored the Morrigans, I started running into Her followers in places I’d expect them and places I never would. And the conversations often turned to ways these people had been hurt by life or other people, ways they’d been abused, ways they felt devalued, ways they were questioning their worth. And over and over I’d end up sharing my own story, my own struggle to recover a sense of sovereignty and self after victimization and over and over they’d tell me that I’d helped them feel more whole, more empowered. I found myself opening up to strangers about my own past, my own pain, and becoming an advocate for the beauty of brokenness and the potential to heal even when we have lost all sense of personal value. I found myself speaking out against the very idea of being ashamed for being a victim, and speaking instead about the power of the survivor. The strength of knowing exactly what you can endure. Then this started to happen more generally, a push to help people see their own power, their own value, their own worth, even when they had been broken. Especially when they had been broken.

And finally – not quickly – finally I realized that healing is a layered word, and that what They wanted from me, what They’d always wanted from me, wasn’t to physically heal people but to heal people’s sense of sovereignty. Sometimes this is through encouraging words, and sometimes this is through a challenge, because They can be hard even in healing, but the result is growth and strength. I’m still fumbling to learn how to do this well, but at least now I know what I’m supposed to be doing, and now it feels right and I enjoy doing it. I joke now that She sends people to me when She needs to, but it’s only partially a joke; when my service is needed the person will find me.

Although different people argue for different views of the Morrigans, to me they are Goddesses of war, battle, death, sovereignty, prophecy, magic, and power – and to honor Them is to acknowledge those things and what they mean in our lives even when they are unpleasant things to contemplate. They push me, constantly, to live outside my comfort zone, to do things that I’m afraid to do, and most of all to speak up and speak my truth. Since I have been following Them I have found a lot more courage then I ever thought I had in me, and I have tried to help other people find that same courage. I have also learned, through an understanding of the importance of all of the worst things that They hold sway over, that being broken doesn’t devalue a person. If anything my experience with the Morrigan has shown me that She – They – seem to have an odd affinity for the broken.

My main deity of the three, the one I am actually formally dedicated to is Macha.² I find Her to be very much a Goddess of women’s rights and empowerment. In following Them, and Her, I have been led on many interesting adventures and met some wonderful people. They are not easy Goddesses though, although perhaps none of the Gods are, and the saying that you will sometimes hear that with the Morrigan there is always a cost I believe is true. I have been very blessed by Them, but I have also paid for that blessing both in the things I have done for Them and in the standards that I know I am held to.  There is something relentless in Them that I admire and it pushes me to do my best for Them.

Following the Morrigan, once I set out on that path, became a series of challenges to be met, of opportunities to be seized, and often of inexplicable situations that I would never have expected. I have slowly learned how to listen to the message that come in dreams and through others in Her/Their service and how to check or verify things I am being told (discernment is always your friend). I’ve made friends with crows and grown to appreciate their song outside my window. I have faced death twice and stopped fearing living – which might be the best gift she’s given me, and the hardest won. And somewhere in all that there is daily life and family and work and writing books and teaching and general shenanigans as well.

Life would be easier if I wasn’t a follower of the Morrigan, that’s for sure, but it would also be far less interesting, and I think less fulfilling.

1. I had been a certified EMT as a career and as a volunteer at this point and also received training in some esoteric healing modalities (read: Reiki) but I don’t have the temperament in my own opinion to be a traditional healer (back).

2. That’s a funny story of its own, and involves Odin, who I am also dedicated to. I firmly believe that the Morrigan and Odin like to hang out and share war stories over a pint… or nine (back). 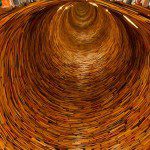 February 29, 2016
Hills of the Horizon: Narrative Theology II - The Eye of the Story
Next Post 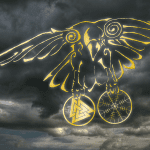 March 3, 2016 Wyrd Words: Why I'm tired of Heathenry's F.U. Debate
Recent Comments
0 | Leave a Comment
"This sounds like a fantastic book! Thanks for the review. I definitely want to read ..."
Holly Phoenix Rising: Review – “A Brigit ..."
"Hi, Tyson. Congratulations on clarifying your thoughts!I just wanted to make one short comment, which ..."
Mark Green Salt City Pagan: Facing the Full ..."
"I hope you will have many happy years on your druid path! I am still ..."
WildestSea Salt City Pagan: Things I Haven’t ..."
"This sounds really interesting. I must admit that I'm feeling pretty depressed about the state ..."
WildestSea Pergamum Unfurled: Review – Revolutionary Witchcraft
Browse Our Archives
get the latest from
Agora
Sign up for our newsletter
POPULAR AT PATHEOS Pagan
1