Hills of the Horizon: The Village Games

Last month I wrote about community, and the complexities of finding it, most particularly for a reconstructionist pagan. I talked about large-scale organisations and things that people do to construct a meaningful community practice outside of their particular tradition.

None of this is the ancient village. And even if it were an ancient village, the structure of co-religionists is not going to be there, everyone sharing the same set of practices and the same rough constellation of understanding of the universe. But that does not mean that there is no space for the village, for things that interlace with the rituals of individuals. It takes work, it takes compromise, but it is there.

Lughnasadh under that name is said to have been the funeral ceremony for and athletic competition in honour of Lugh’s foster-mother, Tailtiu, who was said to have died of exhaustion after preparing Ireland for agricultural use. It was thus a mythological example of an aonach, an event gathering people from all over Ireland which was held at the death of a leader as the foundation of ancestor veneration. (They also appear to have been held at other times, but that was one of the functions.) Mourning poetry (both official liturgical and composed for the occasion) would give way to the proclamation of laws and edicts, and these were followed by the competitions and trade market. The athletic contests at Lughnasadh seem to have been primarily track and field type events and combat displays, and there were also events for artisans and performers, and the option to enter into year and a day marriages.

So this particular festival contained many elements: the mythological, with the story of Tailtiu, the ritual, in the funeral rites and honoring of the great ancestress, the civic, with the reproclamation of the law and the enforcement of the peace among attendees, the social, with the formation of test marriages and the displays of skill in the competitions. All of these are part of what went into the cultural structure of many ancient major festivals, not just in Ireland. All of these are things that can be brought forward into ways of approaching the festivals of our own individual villages.

Of course, I’m not a Celt; Lughnasadh is not my holiday. The festivals of this season are, for me, those of the end of the old year, the opening of the new, and the uncertainties there. The Days Upon the Year are an unsettled time, anxious and out of order. In their way, they are very like the death of a king that way – the old pattern has been upset, and a proper transition must be made to re-establish it. The death of a king… or a beloved goddess, for that matter.

The grafting of holidays and holiday seasons onto each other like that is a long-standing tradition. People find the ways the essences of their own marks of a particular time fit together, how their own particular approaches to things resemble the habits of those they’re close to. The complicated season of the Closing and reopening of the year in Kemetic theology has mythological aspects of plague, of destruction, of fear, of the need to preserve, has the complex five-fold birth of the governing powers of the manifest world, has the reassertion of time itself after a held breath, and none of those are part of the Lughnasadh mythos, but still, there is that thing: something has been disrupted, we must acknowledge it, we must ceremonialise it, and then we must re-establish order and law and celebration.

I’m not a Celtic recon, or a druid, or any of those things, but the group with which I do shared ritual marks – loosely – the wheel year of general paganism. Sometimes one person’s celebrations have a central place, sometimes another’s. It doesn’t have to be Wep Renpet for it to be valuable to me, and our Lughnasadh tends to be pretty much Lughnasadh.

I’m not a Celt, but the first of August some years ago I was rather busy with matters of motherhood and athleticism; that is my oldest’s birthday. Lughnasadh in particular we have to make accessible, available to the children. They are a part of our little community, after all. My Celtish partner has commented that really, we should institute the Oldest Games as part of our thing.

At this point, though, we just have the archery range.

It’s a good range; we’ve got stone lines set into the ground at twenty, forty, and sixty yards from the target, and there’s a damaged arrow shoved into the ground at ten yards where the kids shoot from. Oldest comes in from shooting occasionally with the proud declaration, “I put a hole in the paper!” The first time, she took me out to show me which hole it was.

It’s the beginning of the games. We occasionally joke about racing small children, but we don’t really have the quantity and the ages are too staggered for it to be much fair. Given time, though, we can build it up: the competitions. This year, when we started our rather belated planning, I suggested whimsically that we do honor to the equestrian events by having the kids race on stick horses, but I think we actually only have one stick horse. (Maybe they can do relays.) We have hopes of doing more, eventually – maybe some demonstrations on combat with padded weapons, as one of our people does that sort of thing on the regular. We have a neon-colored horseshoes set for the kids which we could probably set up for the throwing quoits. And maybe someone will have poetry to show off, or artwork. Maybe that someone will be me, though I expect I will be under the children too much to get it done, even if I have a poem cycle nagging at me!

Last year we had a ritual pig sacrifice. A bright pink porcine piñata, to be specific, packed with baubles and some candies and – in deference to my own new year celebrations – an assortment of runes that gave a year-omen to the people who picked them up. It was great fun for everyone, and the kids jousted the pig from Da’s shoulders. We were cleaning motes of glass out of the grass for months afterwards, though, even with the tarp we spread out underneath to try to catch things. The blast radius on a piñata is larger than you might think.

We light a fire. We invite in the gods and powers. We eat. But mostly, we have a community, and share in that, and it doesn’t matter that no two of us share a religion, that the village practices may have minimal connection with our private devotions. We bring out what we want to hold in common, and we build from what we all know, what we all value. We have traditions, developed over time, fed by the different fuels brought by different people.

And in the end, that’s what matters. That we have our little village, defined by the things we do together. Our shared practice expands beyond the mere ritual space, becoming a part of how our community holds its structure. 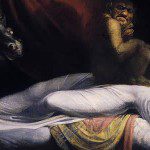 July 28, 2016
Outside the Circle: Dark Spirits of Lammas
Next Post 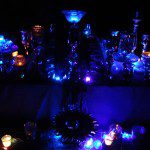