Yes, it is true, I am getting married this June (2018) and we are tying the knot Pagan style….mostly. When we Pagans think of the term Handfasting it can conjure up an elaborate ceremony that pre-dates Christianity; a way to bind the spirits of two lovers. Yet, as much as a bubble-burst as this is, archeology has little to no concrete evidence of a ritual like this before the Middle Ages. Scholars throughout Europe and primarily in Scotland have found that this ritual can be found from around 1100 C.E. onward. The ritual mimics much of what we see today within the Anglican Communion. A priest will take his anointed clothe and wrap it around the couple’s hands as a way to bind them.

However, we can find more evidence of “jumping the besom” as a ritual in Wales, Scotland, and Rome that pre-dates dominant Christianity. This ritual looks a lot more Pagan and has evidence of crossing into the new home as a married couple. We are unsure if there were verbal contracts that fit within the realms of what we now know as a handfasting. 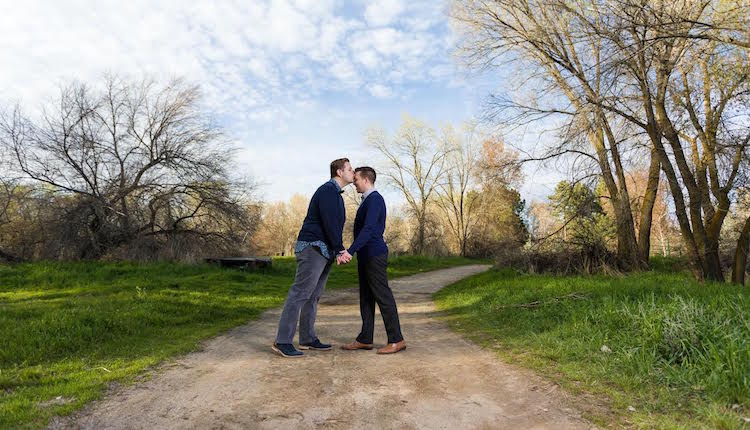 Now that I have burst your beautiful Pagan bubble, I have to admit even I was a little deflated. That was until I really thought about Pagan movements in general and how our revival really did not kick off until the 19th to 20th centuries with exploration of occultism and spirituality (thank you science for bursting the strong Christian bubble). Then my little Pagan heart started soaring again and I was right back at it with planning my upcoming nuptial.

So what goes into making a handfasting cord anyways? Also, what does one need to expect during the process? First, expect to spend a good amount of time making your cord and don’t wimp out on the process. My future husband and I spent three hours with a priestess in order to make our handfasting cord! We had to twirl and spin and twirl and spin and twirl…and you get the idea. Then at the end of the day we knew that this brief moment of hard work was a great symbol of what it means to be married in general. The cord takes dual effort (like marriage), has loads of twists and turns (like life and marriage), but those turns and twists are what make the cord strong (Yes! Just like marriage…it’s sinking in!).

For most of the process we were left to our own devices and we were advised to take the time to bond and put our energy into the cord. I would like to say it was ultra-spiritual and that we really put in some deep-rooted, ultra-super-powerful energy, and profound magickal love into each strand of yarn. But that would be lying to you and I would hate to lie to you! 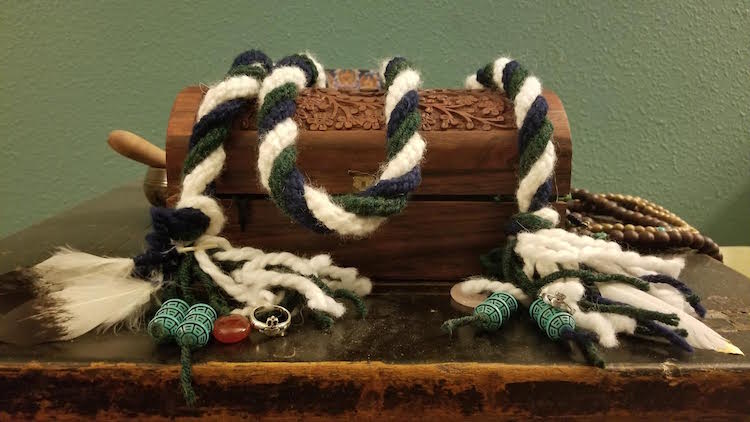 Instead, we spent some of the time talking about what we want from our marriage and some of the mundane expectations. Things like: “We have to take over the other person’s chores if they get sick or really busy” or “In arguments try to know that the other person means well and still loves you. Just give them some slack.” And we even covered our hopes to adopt a child one day and that we shouldn’t be so sensitive to verbal comments because one day a thoughtless comment may slip out and it may not be covered in sugar and spice. We kept it realistic and made the process about who we are as people and as a couple.

Then we proceeded to make jokes and laugh because…well… because we were spinning and twirling yarn for three hours! You tell me that you wouldn’t eventually lose your mind a little! Then it was all done! We dingo-heads made this beautiful cord for our handfasting and it is actually beautiful and meaningful (que heavenly music)!

So, if you are about to “tie the knot” and would like to follow the method we used; below are instructions on fastening your own handfasting cord. There are various (and easier) methods but this one really felt special for us. Just remember that the point of making the cord is to symbolize marriage and life with another person. It isn’t easy but it can be really enjoyable and rewarding. So I hope you enjoy this method and that your cord is strong and full of positive energy! 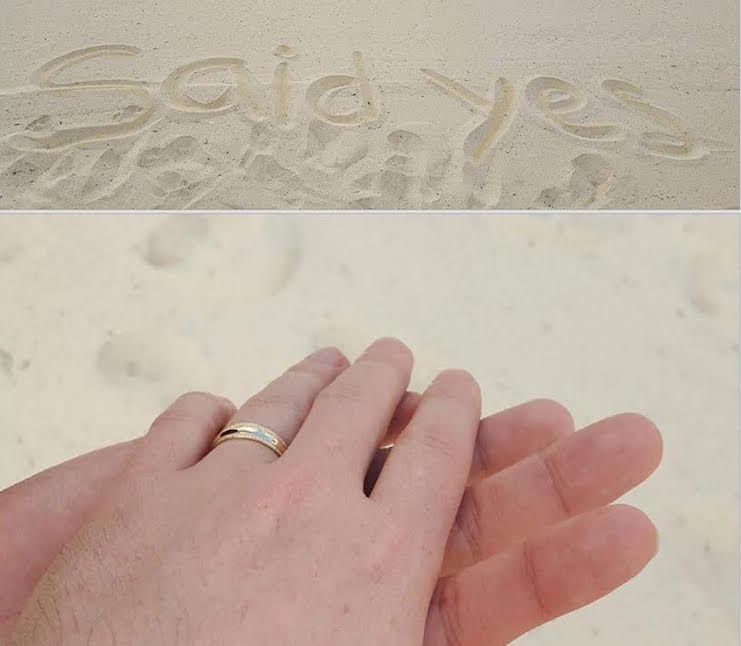 1. Choose three colors that represent what you would like to bring into your marriage (we chose green, white, blue). Be sure it has meaning for both people and it does not have to be your wedding colors.

4. Choose 9 “strings” of the same color. For example: we started with blue.

5. Next, sit 13 feet across from each other and grab one string and begin to twist it to the right. You’ll twist until the string becomes super tight.

6. Once the string is tight put it under something heavy to hold it down so you do not lose the tension. (We used thick books as weights)

7. Do the same process for two more strings so that you have a total of 3 very tight strings.

8. Next, get your three tight strings and hold them together and twist them all together to the left until you have a very tight mini rope. Your mini rope will have enough tension to hold itself together and not come unraveled. So you can set it to the side.

9. Repeat steps 5 through 8. This should give you a total of 3 mini ropes of the same color (3 mini blue ropes as our example).

10. Now take all 3 mini ropes and begin to rotate twist them to the right until they are extremely tight. By the end you will have created a thick rope made of your first color. (The rope does not need to be tied off at the end because of the twisting technique it will be able to support itself). 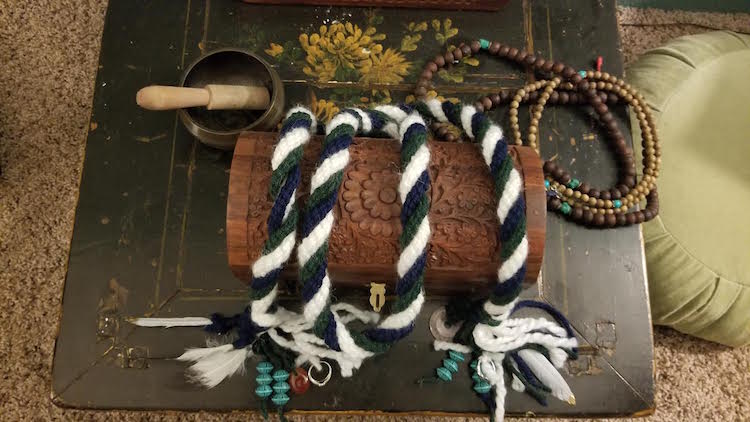 11. Repeat steps 5 through 10 for your remaining two colors of yarn (Green and white as my example).

12. You should now have 3 thick ropes consisting of your three chosen colors (1 blue, 1, white, and 1 green as my example).

13. Combine the 3 thick ropes and tightly twist them to the left. Remember; try to get this as tight as you can without scrunching the rope or creating major lumps.

14. Tie each end of your cord. You should have some fringes that you can tie objects into if you like (we tied stones and feathers onto our cord).

15. You now have your handfasting cord!

The process isn’t easy and it is very time consuming but there are rewards. You and your partner spend time and energy making something that represents each of your intentions and hopes. For us, it was a series of jokes laced with dreams, expectations, and sincere love. I hope that the energy and experience will carry throughout our life together and our marriage.

As always, walk your path with integrity and light.

All photos by and/or courtesy of the author. 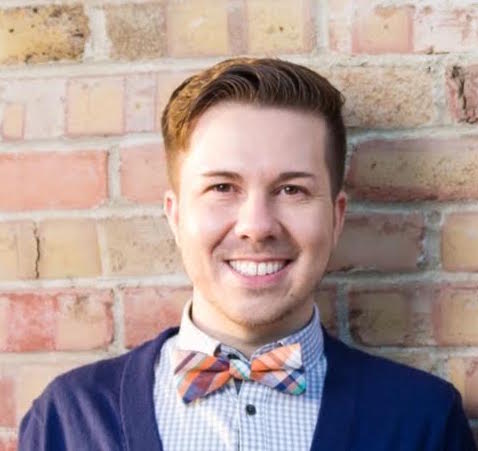 About Tyson Chase
Tyson Chase is a practitioner of Kitchen Witchcraft, living in Salt Lake City, Utah. He is a business professional by day and freelance writer and researcher by night. His research includes over 15 years as a practitioner of Witchcraft, historical research, comparative religion, anthropology, and an evolving approach to Kitchen Witchery. You can read more about the author here.
Previous Post 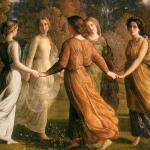 May 29, 2018
Between Two Worlds: Welcome to the Circle of Sisterhood
Next Post 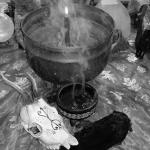 June 3, 2018 Irish-American Witchcraft: Acceptability Politics and Being a Goth Witch
Recent Comments
0 | Leave a Comment
"That's similar to what the Australians do. I'm against the idea. If a person's only ..."
Person223 Druid in the City: After the ..."
"You could do your part to cut dependence on fossil fuels by.....stopping your use of ..."
Person223 Druid in the City: After the ..."
""Witchcraft is about helping yourself, not putting yourself in debt. Be sensible and make your ..."
Carl Druid in the City: “Store Bought ..."
"I guess my voice sounds kind of average. Don't really know how else to describe ..."
Amanda Ingalls The Corner Crone: Lift Every Voice
Browse Our Archives
get the latest from
Agora
Sign up for our newsletter
POPULAR AT PATHEOS Pagan
1