Last night I woke in the early hours with a start. I heard the sound of something crashing or falling and then footsteps pacing below. I wasn’t really awake so without thinking I shoved my ever-suffering husbeast and demanded he accompany me downstairs.

Once we had satisfied ourselves that no one had broken into the house, that the cats hadn’t destroyed anything and nothing was going on outside in either our front or back garden, the faithful husbeast stumbled back to bed going, “You haven’t made us do an ‘intruder search’ in ages; what gives?” Bless him, he’s not much of a believer; but the minute those words slipped out of his mouth, I knew and just smiled. It certainly explains why I’ve been woken every day at approximately 03:15 for no apparent reason. Something is trying to get my attention.

I don’t think you would think that I was telling a lie if I said that October is the most liminal and magical month of the year. Something about the final shift from Summer into Autumn is energetically very different from any other seasonal change. The richness of fruits, the mist and the colours all add to an aesthetic that appeals to all audiences and the Witch more than most.

But more than that you can sense the stirring of the Wild Hunt and it rushes through your veins a drumbeat like hooves beating out a rhythm in the night. The dark half of the year for us is not about rest; it is for going within, for chasing our hopes and fears across the landscape of our minds whilst Gwyn ap Nudd and the Cwn Annwn chase their invisible quarry across storm darkened skies.

It’s also a time when there is an increase in reports of supernatural phenomenon, particularly in the virtual world of social media where people can hide behind the anonymity of a computer screen and therefore feel less foolish talking about these things.  “It’s the season when the veil is at its thinnest” is thrown about a lot and it’s not some hackneyed saying, it’s an actuality. Whilst it’s tempting to blame this increase in manifestations to newcomers and those with over-active imaginations it’s just not the case.

These increased incidents are not surprising, really, considering the amount of energy that is swirling around and how much intent everyone puts into their magick during this time. Magick often dedicated to the Ancestors of all varieties. It’s going to stir things up and sometimes draw things through. Mostly though, I believe that this time of year affects the OtherWorld in exactly the same way it affects us. So, with many of these reports what we are seeing are spirits who live here all the time, but just like us the windswept days, the pumpkin spice and the bonfires get them a little excited and rowdy.

As a group of enlightened individuals on a journey of discovery and magick, it never fails to amaze me how many people’s first reaction to somebody saying that they have a problem is to suggest that the sage bundle gets an outing and everything gets smudged and banished within an inch of its life. No questions asked, no by your leaves, just light that sucker up and wham bam thank you Ma’am! Out damn spirit out!

But that noisy spirit could have been a really useful magickal ally, and if you had any inclination to work with your local Spirits and Fae you may well have just done a really good job of peeing them off but that’s OK because now there aren’t any funny bangs coming from your closest, right?

Whenever I am asked to deal with restless Spirits, fractious Fae or anything else a bit spooky for that matter, I run through the following check list:

You see we are quite an arrogant species, and we often forget that we are one of the youngest of the races. Our locust-like devouring of the landscape is affecting the natural spirits around us and this time of year allows them to register their disgust just a little more loudly. In ways that even folks who firmly reject any form of psychism can’t ignore.

So, to banish them from your location may mean that they move in with Old Mrs Griggs from next door, 75 years old with a heart condition. Last thing she wants is to be scared within an inch of her life by rowdy behaviour in the middle of the night. It’s just not going to be good for her blood pressure now, is it. And let’s not even talk about the young single mum on the other side, working two jobs and trying to get her kids to school on time!

Finally, I’d like to point out Demons are not as common as you would think and most of them have jobs to do. The likelihood of one choosing to take hours out of its day just for giggles to annoy you in the middle of the night is quite slim; you’d have to do something pretty interesting to gain its attention and doing the Ouija board once when you were 17 isn’t it.

So, promise me, in the next few weeks try and take a different viewpoint first. I for one will be putting milk and honey out tonight, just to see what happens. 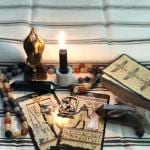 October 13, 2019
Of Light & Shadow: Connecting with Anubis at Samhain
Next Post 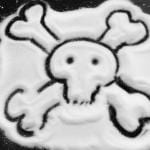 October 16, 2019 The Corner Crone: When Photos Are Rocking Are Spirits A'Knocking?
Recent Comments
0 | Leave a Comment
Browse Our Archives
get the latest from
Agora
Sign up for our newsletter
POPULAR AT PATHEOS Pagan
1