The Corner Crone: Rebalancing at Mabon

Jason Mankey’s post about the Autumnal Equinox caught my attention the other day. In it he writes:

Most of us probably live our lives out of balance. We either focus too much on work, or not enough on it, and some of us prioritize doing things for ourselves instead of doing things for others. No matter how great your life is, it’s possible that there’s something just a little bit out of whack, and there’s no better time to work on such things than the Fall Equinox.

As it happens, I’ve been thinking a lot about balance lately.

Since my sister’s death now almost two years ago, my experiences around Mabon and balance have changed. September post-Laura has become an annual metaphor for functioning in a state of imbalance without realizing it, a reminder of how often we mistake routine for balance.

Laura didn’t tell me she was ill until a few days before she died, in October. Thus, that year’s September was the last month when everything was “normal” (except, of course, it wasn’t). When everything was balanced, or so I perceived. In these following years, then, Mabon has become for me a month of exploring the nature of states of balance, perceived and otherwise.

There’s a dynamic tension that is particular to the Equinoxes, a push/pull of “both/and” that offers so many more possibilities than we might find in a mundane world that generally defines things in terms of “either/or”. What seems like a moment of balance, of somehow standing still, though, really isn’t. In the Northern Hemisphere the Autumnal Equinox occurs when the sun crosses the celestial equator going south; the sun doesn’t stop above the equator (of course) but keeps on moving in its elliptic path.

It’s my impression that a lot of folx might experience Mabon as more of a mile-marker to get past on the way to Samhain and Yule, perhaps particularly so in this year of Covid19 and almost six months of quarantine. We want this “new” normal—our unbalanced state—to stop; we want to get past it and return to what we had always known as “normal”. Either we’re still dealing with Covid19 or we’re past it; either everything is balanced or it’s not. Either it’s Autumn or it’s not.

But we who walk the crooked path know that the Universe is not an “either/or” kind of place, not at its core. And we know that balance is anything but static; it’s a state of percolating possibilities. The same is true for each of us.

The Autumnal Equinox is not like flipping a switch on a Celestial Latte Machine resulting in a gushing cosmic stream of Pumpkin Spice (which, euw). Yes, we know its parameters—we know when it will occur, we can measure its beginning and end, we know pretty much what to expect of the seasons on either side of it—but the energy of Mabon is more nuanced, more amorphous, more “both/and” than its definition would make it seem.

If we take the time to lean into it (and not just get past it), the energies of Mabon affirm to us that we are not static beings; we’re beings that percolate with possibilities. The Universe, and we in it, are creatures of “both/and”. In a very real sense, those of us who are mindful that routine is not the same as balance can be thought of as people of the Equinox.

We never know what we don’t know, do we? We can be ticking right along for days or weeks or years, both finding comfort in our routines and running the risk of becoming dulled by them. Then something unexpected happens, tossing us out of the boxes we’ve made of our lives—boxes that have become so familiar that we no longer perceive we’re in them—and we find ourselves badly thrown out of balance.

I’m still finding my balance post-Laura, and the energies of Mabon remind me not to be too quick to define what that new balance will be, what it looks like, what it feels like. As the Equinox nears I’m finding I can visualize her so clearly when I speak Byron Ballard’s Prayer for the Dead from her book, Earthworks: Ceremonies in Tower Times, during my morning devotions. I can see my mother standing in the mist on the other side of The Door, her arms wide open and her face alight with joy as Laura passes from The Gate through The Door to join her. I find I’m finally able to cry, and they are tears of both sorrow and rejoicing.

In this Equinox season when our gyroscope of a planet is poised for a brief time between shorter days and longer nights (or between lengthening days and diminishing nights), when all around us in held in momentary balance as Mother Earth seems to take a deep breath and hold it for a few cosmic moments before sighing and moving forward, ever forward, may there be a few moments that offer each of us an opportunity to pause for rebalancing our energies as well. May we lean into the creative tension of “both/and” and glean from that a bountiful harvest, sustenance for our soul-work.

And Laura, because “my thoughts are with you, holding hands with your heart to see you” and because we so loved this song, I close with Earth, Wind & Fire’s “September”.

May You Be Well. 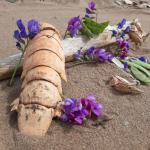 September 2, 2020
Living the Liminal: How to Witch When Moving
Next Post 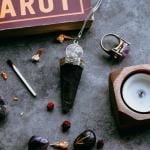 September 6, 2020 Cross and Crossroads: When to Call Yourself a Witch
Recent Comments
0 | Leave a Comment
Browse Our Archives
Related posts from Agora