The Corner Crone: Who Do I Say I Am?

Ain’t nothin’ like the turn of the seasons to make you realize just how stuck you are. The weather has trimmed some of its swelter and heat, and Halloween kitsch has overtaken even the produce aisles—so it must be Autumn, right? Pumpkin spice lattes—oh frabjous day! Season of the Witch—callooh callay!

Yeah, I’m not feeling it this year, or at least I haven’t been feeling it lately. Instead, this seems to be shaping up to be a season of introspection that has me wondering if I’m really all I think I am. If I’m who I’ve thought myself to be. Who others perceive me to be—which let’s face it, after six months of isolation WHAT “others”?

It’s so easy—too easy—for me to define myself in terms of what I am not. I’m not a WitchTokker, I’m not a Pagan podcaster or vlogger, there are no book contracts in the pipeline, no speaking engagements on the horizon. And why would there be? I’m nothing special. And of course it’s such a short step from there to “I’m nothing”.

Some of you may be familiar with HBO’s Lovecraft Country. In Episode 7 Hippolyta Freeman searches for answers to questions that no one around her will answer for her. She ends up on journey in which she redefines—or, more accurately, rediscovers—who she is. Dr. Kinitra D. Brooks writes in her review of this episode:

The first iteration of Hippolyta is as a captive in an intergalactic spaceship. She is frantic as she is determined to get out, even as the goddess, Seraphina (full name: Seraphina AKA Beyond C’est—a nod to Beyoncé as well as loosely meaning “beyond this”) repeats: “You are not in a prison.” And yet she is; Hippolyta is a prisoner in her own mind, bound in her lack of imagination, the strongest shackles of all. She laughs maniacally as Seraphina repeats, “Name yourself. Where do you want to be?…Name it.”

There’s a world of difference between “name yourself” and “make a name for yourself”, isn’t there? Turns out this is one of the things I’m struggling with.

At what point did fame and (relative) fortune supplant the value of my own sovereignty as benchmarks for my personal growth? At what point during quarantine—which should be a Solitary’s Promised Land—did I start measuring myself against others only to find myself pathetically lacking? And how do I get beyond this?

I was startled a couple of days ago as I spoke Byron Ballard’s Prayer For the Dead. In the eight months I’ve been speaking this prayer, the visualization I’ve had of what lies beyond the gate and the door has evolved from an empty mist-covered meadow to a flower-strewn field populated with an ebullient horde of beloved dead, including my mother, her arms outstretched and the biggest smile on her face as my sister runs toward her.

I’ve made peace with this image, for they did so love each other and were happiest when they were together. I’ve felt like I’m watching a film clip over and over; I know what’s going to happen but I never seem to tire of seeing it.

And then a couple of days ago my father appeared in the field. What’s THAT about, I wondered.

Or maybe the story is this: maybe that’s not how others saw me; maybe that’s how I saw myself. How I knew myself. Maybe now—children successfully launched as adults, I the last survivor of my family of origin, six months into quarantine—maybe now I’m in a heartspace where the first descriptors that come to mind aren’t in terms of my relationships with other people, but are instead in terms of my relationship with myself.

And in redefining—or, more accurately, rediscovering—myself, as paradoxical as it seems, there has come before me an opportunity to fill in the dad-shaped blank space that’s been consigned to the shadows for so, so long. After all, ‘tis the Season is it not?

And so (apologies to John Muir and Buddhists everywhere) into the forest of my Self I go, to lose my monkey mind and find my soul. To learn again who I am as just me by myself (but I’m not really alone, am I?), freshly armed with the knowledge that it doesn’t matter who others think I am–or if they even know I exist. It matters who I think I am. It matters that I exist.

In this season of Samhain, this season of introspection, may you find opportunities to discover who you have become and who you are becoming. May you have the power to rewrite your own story, if you find it needs a rewrite.

And try not to compare your journey, the way you witch, to others. Turns out that’s one of the strongest ways to shackle yourself. 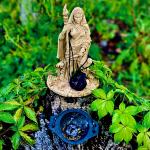 October 2, 2020
Magick IRL: A Spell to Focus on Fitness
Next Post 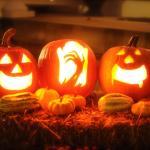