“To befriend an oracle,” writes Danielle Dulsky, creatrix of this profoundly powerful deck, “is to bow deeply to that wild and unseen web to which we already belong.” What follows in the Sacred Hags Oracle companion book is a breathtaking tone poem painted in sweeping strokes of metaphor and mythos. 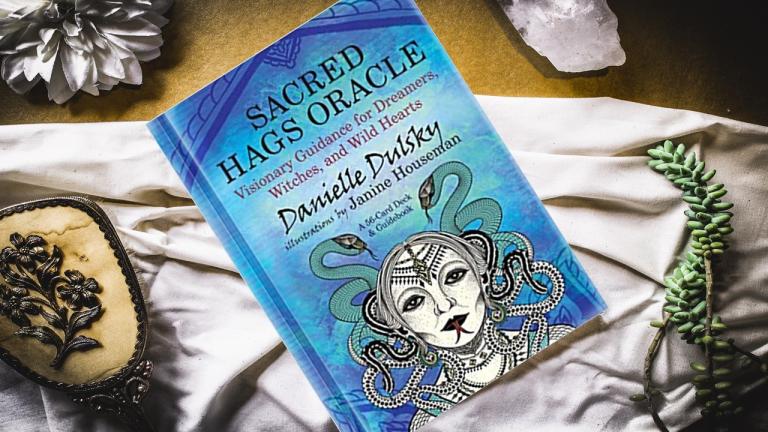 This Oracle deck is utterly unlike any I’ve encountered previously. Deftly illustrated by Sigil Witch Janine Houseman, the deck is arranged into four suits (or sigils) comprising 14 cards each: The Sacred Hags, The Seasons, The Stories, and The Spells. Each suit features a specific sigil, and each sigil is further combined to create a compound sigil on the back of the cards. Houseman writes of the compound sigil, “all four of the sigil energies are woven together in the shared symbol reflected on the back of each card, a sigil that reflects the ‘story’ of the ‘sacred hag’ casting her ‘spell’ upon each ‘season,’ letting each season cast a spell upon her.”

The deck and I have slowly been introducing ourselves to each other over the past several days, with a deep respect on my part as is natural when approaching wisdom-bearing elders, which this deck fully embodies. One of the concepts that is deeply resonating with me is that of non-linear time as represented in the deck, what Dulsky refers to as Eternal Time. In one of the companion guide’s many heart-achingly gorgeous phrases, she writes that eternal time “[…is] when our only work is to become the crone-spider who weaves moment to moment, who spittle-bonds bridge lines between memory and desire, who moves with an infinite trust in the grand bewebbed order.”

I asked the deck this morning what story it would like for me to tell about it and drew (unsurprisingly, because this deck is that intuitive) two cards from The Stories suit and one from The Seasons: The Raven’s Ritual, The Wild Hunt, and Season of Mud-Caked Hands. The draw spoke directly to my own recent journey of moving through the destruction of one way of being, the resulting quest of rediscovery, and the nurturing of the new seeds of Self that have been planted within my soul.

Dulsky writes that The Stories suit asks the Seeker to review their own personal story as an epic tale, while The Seasons suit reflects insight about where the Seeker is in their story. There are suggested keywords for each card as well as a wisdom passage to consider, and Morning and Moonlight Rituals also specific to each card. Additionally, there several spreads included in the text, and Opening Rituals the Seeker may elect to perform as they get to know The Sacred Hags Oracle.

The Sacred Hags Oracle is published by New World Library, and I want to spend at least a few moments shouting out this publishing house. They’re active supporters of The Green Press Initiative, “a nonprofit program aimed at getting authors and publishers to use recycled paper and more environmentally safe processing and printing procedures. In addition to using soy-based inks, nearly 100 percent of New World Library’s new titles are printed on postconsumer-waste (PCW) recycled paper.” Supporting companies that are as mindful about reducing their carbon footprint as I try to be is something this witchy consumer can totally get behind.

The packaging of this deck deserves a quick note as well. The box, saturated in blues and greens and teals and the barest hints of indigo, resembles a book with the cover opening from right to left. I cannot tell you how deeply satisfying it is to see the ethos of the deck manifested in its packaging, for the deck itself also speaks its truths in story form. The box is a nuance-filled work of art.

One more note about the backs of the cards, and something I discovered by pure chance. I happened to glance at the deck from a fairly oblique angle and was startled to notice a three-dimensional quality to the imagery underlying the combined sigil. I have never seen anything like it, and experienced that moment as a reminder to never take things at face value (which is, after all, the Witch’s Way).

I’m eager to continue my journey with the Sacred Hags Oracle, and I cannot recommend it highly enough. This is a deck that lingers with you throughout the day, a steadfast and true companion in your journey of Self.

April 12, 2021
The Corner Crone: The Infinite Possibility of Twilight
Next Post

April 15, 2021 Salt City Pagan: What Type of Witch Are You?
Recent Comments
0 | Leave a Comment
"This is a beautiful elegy for the love you shared with each person and creature. ..."
Badgergrl Phoenix Rising: Cerridwen’s Cauldron – Dealing ..."
"This was a cool way to celebrate. With increasingly widespread vaccination there is no reason ..."
kenofken Between Two Worlds: A Covid Beltane ..."
"Thank you for reading!"
Martha Kirby Capo The Corner Crone: An Altered State ..."
"Love this! Thank you!"
Kristin Sweeney The Corner Crone: An Altered State ..."
Browse Our Archives
get the latest from
Agora
Sign up for our newsletter
POPULAR AT PATHEOS Pagan
1