Greg Hernandez of Gemini Moon House of Art & Magic is the creator of the Epithets of Hekate Oracle deck, available through his Etsy shop. Greg is a visual artist, podcaster, and energy healer who received a life-changing message from the goddess: “It is time to begin.”

Corner Crone (CC): I’ve been working with the Epithets of Hekate Oracle deck for a few weeks now, and I’m loving it more and more each time I use it. I know you write about the birthing process of the deck in the Preface to your Guidebook, but could you share a little of that story here? What inspired you to create it?

Greg: I had a big spiritual awakening a few years ago where Hekate came to me at a low point in my life. She appeared to me in a very realistic dream that jolted me into pursuing my art which then fueled my psychic development and led me further on my path. I wanted to create something to honor Hekate for helping me through that time.

CC: Hekate has well over 200 epithets. What was your process for selecting which ones to include in the deck? Do you have a favorite card (and if so, why)?

Greg: That was one of the longer parts of the process but I read different sources and wrote down the epithets that called to me and also sparked some sort of imagery that I could create for each specific epithet.

My favorite card in the deck is probably the one with the most color, which is Astrodia (Star-Walker). I have been fascinated by astral travel since I was really young, and I am still trying to experience it successfully.  But I liked the idea of a doorway opening into a magical spacy environment.

CC: I have to say that I love your artistic approach. The art and calligraphy on the cards have a pre-historic quality that consistently communicates to reader that Hekate has been around for millennia. I’m reminded over and over again of ancient cave paintings each time I use the deck. Can you talk a little bit about your artistic approach in creating the deck?

Greg: Thank you, I love your description. I did want to evoke a sense of how long the goddess has been around as well as create a homage to the fact that most written accounts are Greek.  I wanted the imagery to be simplistic and reflect the epithets.

Hekate is very matter-of-fact and straight to the point, and I also wanted the cards to reflect that energy of the goddess.  My style of art isn’t always realistic looking; I wanted to keep my approach true to my surrealistic style of art.

CC: As a Hekatean witch, I very much appreciate that the majority of the cards reflect the current understanding of Hekate’s associated colors as red, black, and white. But some cards (Astrodia and Kalliste come to mind) include additional colors. Can you talk about your decision-making process for that?

Greg: I really did want to keep the deck’s color scheme as close as possible to those associated with Hekate, but as an artist I also wanted a little pop of color here and there. I also wanted some of the cards to have gold, like the scales in Kalliste (Fairest) and the mask in Chrysostephanos (Golden Crowned) to reflect the light that I remember seeing coming from Hekate’s eyes when I first encountered her.

CC: I know this deck has only been available for a short while. What has been the public’s response to it?

Greg: I am really pleased at the response I got from releasing this deck. I am grateful you were my first order, so thank you for kicking everything off for me.

It is very DIY and doesn’t look like a traditional published deck, so I was worried about how it would do.  I love that people are responding well to the cards and the digital guidebook I chose to go with.

I sold out pretty quick on the first round and finally found my flow in ordering bulk copies at a time. I still have people asking when they will be available again. I will also be switching to a new online metaphysical marketplace in the near future which I think will bring new eyes to my work.

CC: I’ve found the deck works very well as an amplifier of comprehensive themes presented in Tarot spreads, and of course individual cards can be placed on Hekatean altars as reminders of aspects we may want to be focusing on. Are there some other ways you envision the cards being used?

Greg: I am glad you noticed that I was very inspired by Tarot, but I felt creating a Tarot deck was quite a big undertaking, although it may still be something in store for the future. I really did like the idea of being able to use the cards on your altar, in rituals, for meditation, and in spell work. I also think pulling a card for the day and trying to embody that aspect of the goddess would be a unique way to honor Hekate.

CC: Any new Hekatean projects on the horizon?

Greg: I do still have my Hekate oil I gave out with the first run of Oracle decks that I was thinking of bottling and adding to my shop. I also wanted to make skeleton key prayer bead necklaces at some point. The one I made for myself got some attention in the picture I had of it with the cards.

As far as making more cards I would also love to honor the other goddess I work with, Diana, with her own set of cards. I am still continuing to print the Epithets of Hekate Oracle in small batches, and everyone can stay up date on when I have them available though my Instagram.

The deck is slightly larger than many Tarot decks, bout 3½” x 5¾”; the cards are rectangular with rounded corners. The backs of the cards are glossy black with a strophalos (Hekate’s Wheel) in the center. I had a slight concern that the backs would show smudges from handling, but so far that has not been an issue. I will say I am pretty careful about wiping down whatever cards I’ve drawn after use.

I tend to shuffle all of my cards using an overhand style, which I think is kinder to cards in general and (to me) feels a little more intentional than a riffle shuffle such as one might use for card games. The cards of the Epithets of Hekate Oracle deck have stood up well to my style of shuffling and, if you’re a riffler, should be able to stand up fairly well to repeated bending.

The LWB (Little White Book) that accompanies the deck is a .pdf, which I very much appreciate as it’s a green alternative to a printed version of the Guide. This deck ticked a lot of boxes for me: in addition to it being a terrific expression of Hekatean energies, I was able to support a small Pagan business and an artist who’s a member of our Pagan community.

May 13, 2021
Salt City Pagan: Choosing to Leave Paganism
Next Post 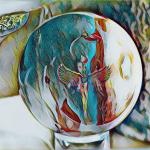 May 19, 2021 Salt City Pagan: Expanding on Disbelief
Recent Comments
0 | Leave a Comment
"I absolutely resonated with this; there’s a John Wick action figure on my Mórrígan altar"
femmetac Making Light: My Little Pony on ..."
"This is great, thank you! Litha blessings!"
Elaine Kolp Salt City Pagan: How Pagans Celebrate ..."
"I think its awesome youre a Buddhist and a Pagan. Namaste! I became a Pagan ..."
Brianna LaPoint Salt City Pagan: Why I Choose ..."
"Energy cannot be created (what is having children then?) nor destroyed. I think that this ..."
Brianna LaPoint Salt City Pagan: Why I Choose ..."
Browse Our Archives
get the latest from
Agora
Sign up for our newsletter
POPULAR AT PATHEOS Pagan
1