People Are More What They Hide

People Are More What They Hide February 13, 2020 Kristy Robinett 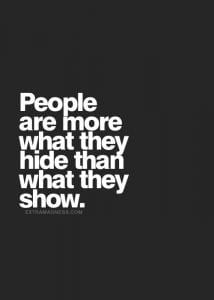 So Timothy introduced himself to me as Catherine’s husband and that he was taking the session. It started innocently, but turned ugly fast. I offered him a bottled water – he denied. I walked him into my office and showed him to the couch where I asked him to sit down, but he continued to stand there looking around at my trinkets. He raised up my blankets and set them down. He bent down and reached under my couch. He lifted up a lamp and set it back down. He picked up my pillows and moved them to other locations. I just let him. I curiously watched him realizing he was more than skeptical. He finally took a seat and I knew that Catherine didn’t give him her session, he denied her from coming. But why? It didn’t take a professional psychic medium to know why. He began spouting Bible passages at me at how what I was doing was evil. I listened. He yelled that I was ruining relationships and families. I was tearing people apart. And I listened. He told me that I didn’t believe in God, I just told people that. And I stopped listening and I told him it was my time to talk. I stayed calm while he seethed. I knew I wouldn’t be able to convince him of anything, but I wasn’t going to be judged and persecuted.

March 11, 2020 The Calm Amidst the Storm Insight Oracle
Recent Comments
0 | Leave a Comment
"Wow! I was just struggling with a grudge against a co-worker and look what popped ..."
Katherine Osburn Excuse Me, Have You Found Jesus?
"I'm sorry for your loss. And how messed up that people confronted you like that! ..."
Kaia Rose My Big (and Only) Brother
"I'm so sorry for your loss. What a beautiful tribute to a special person!"
Kathy My Big (and Only) Brother
"Kristi - I honor your gift and your intention to comfort the bereaved with your ..."
Grace Terry Visits from the Other Side
Browse Our Archives
get the latest from
A Happy Medium
Sign up for our newsletter
POPULAR AT PATHEOS New Visions
1

A 10-Point Guide to Finding God’s...
Wake Up Call
Related posts from A Happy Medium

Challenges and When to Let Go
How do you know that you have the best partner for you?...
view all New Visions blogs
What Are Your Thoughts?leave a comment
Copyright 2008-2021, Patheos. All rights reserved.