Unfortunately, today is not a very eloquent or deep thinking sort of day – so, instead, I will leave you with snippets from various stories relating to the new gods I work with and the spirits connected to them. (The last few numbers relate mostly to the mythology of Fear* and Jealousy*, most of which is still being stitched together.) Thursday will resume with a longer, informative or bumbling post!

Fear* walked farther from his home each day, but he did not forget – the sharp hills to the north where dragons lay; the River sweet and fierce; the forest his lover had set alight with fire that did not warm. He told every soul he met of the wondrous land that would one day be his own, and none believed him. For there were stories of a land beyond the Gate, a land ruled by a fist full of diamonds and cruel hot eyes and Jealousy. For there were stories of souls cast out and alone for daring to ask after love or kindness.

“Give it up,” each soul said. “It is gone. What is broken cannot be undone.”

eternity is so often boring. And when the world below flourishes and grows and moves with a thousand various gears, all so intricate and neat and bursting brief, there is temptation. A want as sweet as untasted honey and fruit and wine and skin against skin.

When Mallory opened her eyes and met her mother’s gaze, it was that she had grown into a woman already and in that moment any connection between the two snapped apart.

Mallory was, in such a way, considered lonely. It did not help that whatever she touched – skin or rock or plant – would wither and decay under her fingers, and so every creature and plant shied from her. She did not touch anyone or thing and instead sat silently by the River, watching the water flow.

She considered the loneliness she was said to bear, and eons of thought and consideration she found she was not lonely. She was settled near the River and sure of herself, and with that knowing she journeyed out into the world.

The world was not settled and sure enough for her, however.

Adilene had hair the color of a winter sunset, skin as white as milk, and eyes that seemed colorless save when they shown iridescent in darkness. She lived where the City met the Country, and she was known throughout the bustling streets and chirping forests as a woman with pride and capability and strength. When no one would dare the cold, she would wrap herself in a cloak of white and find all the small creatures shivering in the expanses of snow.

She was well-loved and opened her home always to those who needed it, and always came the scent of ink and rich berries. And there came a day when a Girl-King donned a mask and walked to Adilene’s home and knocked on the door and presented Herself as a most horrid man with oozing wounds and reeking breath and foul manners.

He wrote until the day that no more words bled out of him.

She had never seen a library before.

Once, when she was a child, she had been given a book. She had read it over and over until the spine cracked unpleasantly and the pages wilted and it became dust, dust that she kept in a bottle and hid in her pockets. Now she was older, as old as some of the sands dotting the sea. But the same thrill that had bit her when she first held that book in her hands gnawed on her again as she walked into the library.

Love me, he says, as though love is coercion,
a forced hand or bluff or skilled game,

Love me, he says, as though love is coercion,
as though I don’t already do.

A wish can break the world, and – ink will withstand more pain than flesh, the dark blood running rivers in the ground.

Jealousy brought us low –
but it was mine, black spear, that split his heart.

But it was mine, dark hands, that buried his blood.

“I am Fear, beloved of the gods!” he cried, and the Gate opened to the thunderous fall of the cherry horse, and Fear* was again in the lands of the West – but no sweet River ran fiercely, no Orchard bore heavy fruits, and all around him was the shrieking cry of the Firebird as he pleaded to skies and sun for Fear* to return to him.

“I am Fear, beloved of the gods, here to make right the world and steal all hearts won through Jealousy!” he cried, and the shrieking silenced and the world woke to starfire. 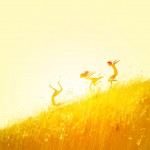 March 20, 2013 Brief: Capitalization & Spelling
Recent Comments
0 | Leave a Comment
Browse Our Archives
get the latest from
Aine Llewellyn - Dalliances with Deities
Sign up for our newsletter
POPULAR AT PATHEOS Pagan
1