Creflo Dollar Made Me a Catholic

The prosperity Gospel movement is bizarre given that Jesus was unequivocal about wealth but, like the secular spirituality of many popular American celebrities, the movement soldiers on.

While it might be a stretch to say that someone like Creflo Dollar made me a Catholic it would be accurate to say that the possibility of theological interpretations like Dollar’s are, in large part, what’s driven me in my search for deeper truth.

A search which has landed me on the doorstep of the Catholic Church.

Who Has the Authority?

I’ve wrestled with authority, and that’s really where it began.

As a Protestant I wrestled with this. Because as a Protestant there can be millions of different interpretations of the Bible. And who is right?

It was easy for me, for most of my Protestant faith life, to brush away questions of authority because they didn’t directly impact my life.

I knew, as all Christians know, that there are thousands of different Protestant denominations out there. It’s easy to drive around town and see scores of different kinds of churches each with their unique theological interpretations of Scripture. That’s why the exist, after all, because they disagree.

And for a long time it didn’t really bother me because we were, after all, Christians and I thought we agreed on the fundamentals. But if Jesus prayed for our unity and, I figured, if interpreters like Creflo Dollar were allowed to gain so much traction, then something had to give.

It’s the sola Scriptura, Bible alone, approach to understanding our Christian faith that’s led to this plethora of interpretations. It’s the Bible alone approach that’s led people like Creflo Dollar to have a leg, any leg, to stand on. In his community, amongst his congregations, Dollar’s interpretation of Scripture—especially key teachings on tithing—have the weight of authority. How he understands the Bible is seen as the way of understanding the Bible.

And this is what gets me.

Before really wrestling with the question of authority and the interpretation of Scripture I understood it to be a fairly  simple process: With the help of the Holy Spirit I would read my Bible, even the most difficult-to-understand passages, and come to an interpretation.

In reality, however, that doesn’t work.

Because my friend, or my pastor, can read the same section of Scripture and come, ultimately, to a wildly different interpretation. And if there is objective truth to be had—and, as Christians, we must believe that there is—then there must be a right and wrong interpretation.

We can’t both be right. But we both have the Holy Spirit—so how are we being steered wrong?

As a Protestant I could find no answer, and it got worse.

Because, I realized, I can’t trust myself.

I realized that if I’m the sole interpreter of the Scriptures, if I’m going to believe in my own authority to understand what I’m reading and how it should be applied to my life, then I’m setting myself on an awfully high pedestal.

But that’s exactly what we do.

If God intended the Bible to be read like we Protestants read it then what alternative is there? I read my Bible, ask the Holy Spirit for help to interpret, and come to a conclusion. This is exactly what Creflo Dollar’s done, and he’s flying around the world in a mult-million dollar jet.

Certainly, we can roll our eyes at theological absurdities like the obviously distorted beliefs of Creflo Dollar’s prosperity mission. It doesn’t feel right to be asking for millions of dollars in the name of Jesus—who ministered to the poor and marginalized. Who told us we must give up our worldly possessions to inherit the Kingdom of God. But, the New Testament teaches about tithing, too.

And an interpretation can be made that says Creflo is right.

In order to interpret Scripture with any meaningful authority, however, I’d have to read all the books ever written.

I’d have to learn, most likely, the ancient languages: Greek and Hebrew. Maybe Latin for good measure, too. I’d have to become a biblical scholar, wouldn’t I, to feel like I’m on solid enough footing in my interpretation?

Or else, how do I know that I’m right?

How do I know that Creflo Dollar is wrong?

And even if I decide rely on outside sources like the ancient Christian Creeds, the Councils, or other weighty theological writings like those of Luther, or Calvin, or N.T. Wright I am still the deciding factor of what to believe in—which interpretation is correct—and I’m still setting myself, alone, as the final arbiter.

This is called solo Scriptura and puts me, ultimately, no further ahead.

The Catholic Church Instead

Instead I found the Catholic Church which claims to have held, and continues to hold, the sole authority to interpret Scripture.

Instead of a million different interpretations I found a Church that traces its lineage, mission, and authority back to Christ and the first apostles. Back to the Lord’s Supper. Back to the Upper Room. Back to Paul, and Peter.

The Catholic Church, which asserts that Jesus didn’t leave us a Bible, He left us a Church. A Church with an authority structure that we can see clearly in the New Testament— a Church that the apostles passed on.

How did Creflo Dollar make me a Catholic?

My struggles shouldered me with the question of who knows what’s right? And why would God make it so tough to discern?

My struggles brought me to the rich theological traditions of the Catholic Church.

A tradition which says, “We have the right answers, because Jesus promised we would.”

Because Jesus did promise to protect His Church from the gates of Hell and, if you ask me, if Creflo Dollar’s really in that Church then I think the gates have swung wide open—and we’re going down. 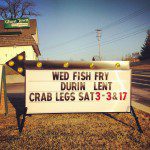 March 3, 2017
Why Abstinence from Meat on Fridays Makes Sense
Next Post 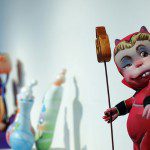 March 8, 2017 It's Lent: Prepare to be Tempted
Recent Comments
0 | Leave a Comment
Browse Our Archives
Follow Us!

Do Catholic Feminists Wish to Smash...
suspended in her jar