Keep Calm And Carry On: How We Respond to Same-Sex Marriage

In Canada, we’ve had legalized same-sex marriage for sometime now. It’s become taken for granted, but the decision yesterday by the highest court of the world’s largest superpower has reignited the discussion around the entire globe.

When I became a Catholic, a convert from Evangelical Protestantism, I wrote about the appeal of the Rock in Shifting Seas. Like many washouts from the emergent church movement I was attracted by a church which spoke clearly about Her beliefs.

I left a decidedly wishy-washy Evangelical church for a greater standard of truth. And that’s not to criticize, what I mean is: I left a church which made a conscious decision not to speak out about many truths (like same-sex unions) for a church which held truth to a standard in which it was clearly and confidently arrived at and spoken about.

All that to say, I chose Catholicism and it would be unfair, and lacking cordiality, to hide behind it and to not lay claim to the beliefs that I chose.

And one of those beliefs is an affirmation of the traditional, sacramental definition of marriage.

So how do we, how do I, respond in the face of a decision to redefine the marriage institution. How ought we Christians—we Catholics—orient ourselves in the ongoing discussion?

I have some ideas.

We Must Respond with Love

In my opinion, a proper Christian response has to keep in mind two things.

The first is love.

St. Paul, in his first epistle to the Corinthians extols us to show love above all else. Our acts of goodness, our preaching and teaching, our gifts given and received and, indeed, our persecution and martyrdom in the name of truth means nothing if we don’t have love.

Our response, then, in the face of same-sex marriage needs to be, first and foremost, one of Christian love. We are not a people of hate; they will know we are Christian by our love. They will know God by our love. Our primary outward facing response must be to show our neighbours love.

But some people may object: St. Paul was writing to the Corinthians not only to extol virtues but to correct wrongdoings in the church at Corinth. After all, merely a chapter later St. Paul is admonishing women (in a not too generous way) for speaking in church. Don’t we, the Christian faithful, have a duty to admonish those who pretend to give and receive themselves in same-sex marriage?

Don’t forget that St. Paul was writing to an audience of Christians in a church over which he held authority to teach. His audience already professed to share in the Christian faith.

And this is where we must make certain distinctions because—and this is the second thing to keep in mind—the Sacrament of Marriage has not changed.

When my wife and I were married in an Evangelical church we made particular intentions to be married by “banns of marriage” instead of by requesting a marriage license from the government. In our province, churches have the ability to declare a couple to be married by reading out their “marriage banns” on a Sunday morning in front of the congregation. The provincial government then, in hindsight, acknowledges that the couple is married on their actual wedding day.

We were church married, and it was an intentional choice.

Ultimately, the state cannot dictate what is and what isn’t sacramental marriage. As a Catholic, my marriage is sacramental, it’s the same marriage that the Christian church has professed, in continuity with the purpose and plan of God since the beginning of time.

I’m sacramentally married, so what’s the big deal with the government changing what marriage means to them?

Because maybe this is the point in history when, finally, on a more global scale, the definition of marriage is different. And, in a sense, it’s semantics.

Marriage, as the Church calls it, is different than marriage as the state calls it. And that’s fine.

Some may, and certainly will, get bent out of shape by the gay agenda stealing our word but it’s only a word after all and I think we can let it go.

And, surely, as we continue to step away from the plan and purpose that God intended for the world we can’t, and shouldn’t, ignore the increasingly deteriorating social fabric. It’s collateral damage on a path that leads away from the revealed truth of the Church and the Bible, but it’s a path we’ve been on for a long, long time and writing a column, giving a talk, or engaging in a debate likely isn’t going to suddenly reverse that course.

So what am I advocating? Do we give up?

Our path forward, as Christians—as Catholics—has never been more simple. We keep calm and carry on.

We respond in love because secular society isn’t held to the same standards as we are as Christians. No more would I expect the secular world to adhere to the Good Friday fast than I would expect them to respect my definition of marriage.

This is first and foremost.

Next, we recognize that we’re not speaking the same language. My marriage, created by God and administered by the Church, is a sacramental marriage. It is, in my opinion, how God intended it to be. But the wider world does not see it that way. They call marriage something different and that’s fine. When we say marriage we know what we mean.

Finally, we get our act together. The Catholic Church needs to reinvigorate married couples to be a witness to the calling of sacramental marriage. We need strong, loving, Christian families to increasingly witness to a fallen world. Surely we’re called to be a City on a Hill but we aren’t called to storm the doors of City Hall. Relax, the battle for marriage (which was likely lost half a century ago anyway) is over and in many ways that’s a relief. Now it’s time to live out our married lives as a testament to our calling.

The United States Conference of Catholic Bishops, not always known as a baston of clear leadership, issued a brilliant statement on the Supreme Court’s decision. In its conclusion it asks American Catholics to move forward—to keep calm and carry on—with a full measure of faith, hope, and love. Yes, what marriage is, to the secular world, has fundamentally changed. But no, marriage in the Catholic Church has not.

Certainly, there are days to come when the class of Christians who affirmed the traditional definition of marriage will be labelled as hateful discriminators and bigots but we’re called to do what Christians have been called to do since the beginning of the Church: to witness with love. The era of the “Christian” Western World—if it ever really existed—is surely in its twilight but what’s wrong with that?

We needn’t bemoan the end of Western Christianity with a collapse of our definition of marriage. We need to affirm, with love, what we really mean by marriage and show grace, mercy, and overwhelming kindness to our fellow sojourners who call it something different. 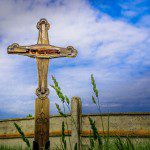 June 23, 2015
Laudato Si: Why the Church Must Speak to Environmental Issues
Next Post 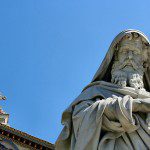 July 9, 2015 So You Think You're Smarter than the Church Fathers?
Recent Comments
10 Comments | Leave a Comment
"Since I know that the catholic religion including their priest hasn’t got the power to ..."
D.M.S. 4 Proofs for the Catholic Church ..."
"What about the Apostle Paul? He was personally appointed by Jesus and he did not ..."
Enzo De Vincentis 4 Proofs for the Catholic Church ..."
"I think that it goes without saying that Jesus' disciples didn't need him to say, ..."
Stephen How to Debate an Evangelical on ..."
"I second both of what you have simply said 3 years ago."
Tom Hanson What Praying to the Saints is ..."
Browse Our Archives
Related posts from The Cordial Catholic 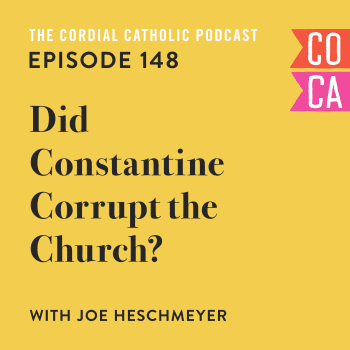