The Incredible Power of “In Persona Christi” 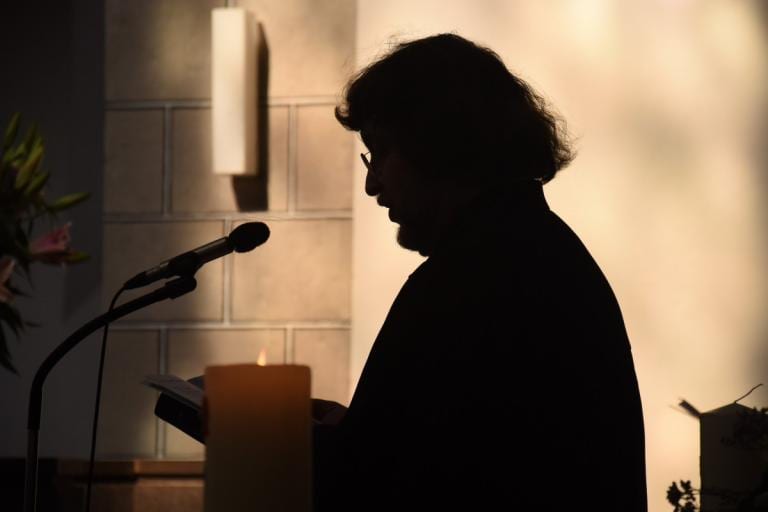 It was a Sunday morning in Ordinary Time.

I learned, a little while ago, that the there’s nothing ordinary about what the Catholic Church calls “Ordinary Time.” Technically, ordinary comes from “ordinal” which simply describes a sequence of things—like counting. In other words, what the Church calls Ordinary Time, the lengths of Sundays in between the high liturgical seasons like Easter and Christmas, is simply counted time. Nothing necessarily ordinary about it.

And on this particular Sunday that was certainly the case.

These days, our experience at Mass with our two young children can be hit or miss. On this particular Sunday, in the midst of a surprise winter snowfall, I dropped my wife and the kids off at the church doors and went to park the car. When I trekked through the several inches of snow accumulating in the parking lot and entered into the church Mass was about to begin—but I couldn’t find my family!

Scanning and rescanning the section of the church where we usually sat I didn’t see them. I hesitated. Maybe our son had to use the bathroom even though we’d just gone before we left home. I turned to head downstairs to the washrooms when I felt a tap on my shoulder, it was our parish priest, vested for Mass, with a big smile on his face.

“They’re sitting over there!” he gestured, laughing.

I broke into a huge grin, too. “So you’re doing usher duty now too?”

I quickly scuttled over to the pew that, evidently, our son had chosen for us. Clear on the other side of the church from where we normally sit. No wonder I couldn’t find them!

We are fortunate to belong to a fantastic parish. As converts, my wife and I are always surprised at how little staff the typical North American parish seems to employ. Somehow, with just a priest and a church secretary doing most of the heavy lifting, our church runs a number of programs, pulls off a reverent and beautiful liturgy four times every weekend, and is always warm and welcoming. This weekend was no different.

But about half-way through the Mass something different did occur.

At first, I noticed the flashing lights outside the church building, just outside the stained glass windows where we sat. I’d been trying to corral our two-year old daughter while my wife ran our son to the bathroom (for real this time) and when she returned I whispered, “What do you think is going on?” She pointed behind us, several pews back, where a small commotion was brewing.

Paramedics, boxes of gear opened on the floor, were quietly speaking to a woman lying down on the length of the pew. They worked quickly and quietly as Mass continued on and I would’ve hardly noticed them if the flashing lights of the ambulance out the window hadn’t tipped me off.

As Mass continued it was a bit difficult to concentrate but the liturgy went on.

I guess, as a priest, there are a number of choices you can make when something like this happens but, as the first responders worked away, it would’ve hardly made any more sense to stop everything and draw attention to the scene—nevermind the embarrassment for the woman that would cause. The Holy Sacrifice of the Mass, after all, the focal point of the whole of the Catholic faith life, is ultimately our highest form of prayer. What better thing to be doing while the paramedics worked on the woman, stabilized her, and prepared her for transport to the hospital than to pray.

So the Mass went on, and we prayed.

Near the end of the Mass, after Communion and as the priest finished praying the concluding prayers, the paramedics began to prepare the woman to move her onto the ambulance.

“During the Mass,” the priest began, “one of our parishioners felt a little bit sick and so we called an ambulance. I’d like us, as a community of faith, to pray for her in a special way right now.”

Then, in the hush of the church, he led us in the Hail Mary beseeching the Mother of Jesus to “pray for us at the hour of our death.” It was scary, with death potentially close, but deeply comforting too as we all prayed together surrounded, nearly palpably, by what the Bible calls that “great cloud of witnesses.”

The nearness of Heaven was real.

And then the paramedics began to wheel the woman, on a gurney, up towards the front of the church to leave by the side doors and what happened next requires some explanation, especially to those outside of the Catholic Church.

See, the Church teaches that Christ picked twelve apostles. When they died or, as required, those apostles anointed others with the imposition of hands to take up their places. Through this chain of authority, begun by Christ, the Church spread all over the world. As Catholics, we trace the hierarchy of our Church and the authority it can claim to act on God’s behalf, right back to the beginning. We believe, likewise, that the priest, in a very particular way, is the hands and feet of Christ on Earth.

The priest acts, we say, in persona Christi.

In the person of Christ.

This is why, tracing his authority back to the apostles, the priest can say, “You’re forgiven” in the confessional after I confess my sins. It isn’t the priest exercising his own special powers—he’s merely making use of the authority that Christ gave the apostles to “bind and loose.” An authority which the Catholic Church, in its ancient line of priests, has claimed throughout all of Church history.

On this morning, this Sunday in Ordinary Time, the priest, in persona Christi, did something so remarkable it had many, maybe most of us, in the church that morning welling up in tears.

As the woman on the gurney went by the paramedics respectfully paused near the front. The priest, our part-time usher running so many of the programs of our parish nearly single-handedly, stepped down towards the gurney and, laying his hand on the woman’s head, he began to whisper words into her ear.

She lay there, awake but with her eyes closed, and a knowing smile spread across her face. A kind of glint of hope, eyes still closed, that told you she heard, she understood, and she was greatly relieved by the words she heard. Like a glass of cool water in the dessert. Like a gasp of fresh air to a man drowning. The relief of knowing that everything, no matter what happens next, will be OK. The paramedics had worked on her body, had stabilized her condition, and were taking care of her. The priest, taking care of her, was stabilizing her soul.

We wept because of the enormity of the grace of God exercised in that moment. The priest, bringing the comforting words of Christ, to a woman in the middle of crisis and the unknown. The priest who, in the theology of the Church throughout the ages, literally stands in for Christ on earth, swooping down to bless her and whisper comfort in her ear. And there, in that moment, the importance of in persona Christi, the importance of someone left to be Jesus in the Church made so much sense. It was visceral.

Because our priest was not merely our priest, as holy and pious and wonderful as he may be, but in that moment, in that particular moment of deep need, his hands as he laid them on the woman’s head, his words as he whispered them into the woman’s ears, his actions and witness to the entire assembled body of believers in that room, were that of Jesus.

He was Jesus in that moment.

Our Lord, in the moment of that crisis for that woman, came to her with the hands and in the voice of a man.

And what an incredible thing to think.

In a particular way all baptize believers are called into the priesthood—a universal priesthood as we witness to our faith and serve humankind like Christ—but in a particular way our ordained priests, recipient of the Sacrament of Holy Orders, are the very real hands and feet of Christ. I believed this because the Church said that it was true and, through a long journey of conversion, I’ve come to trust the Church. But in that moment, that ordinary Sunday, as the priest led us in prayer, as the priest descended the steps to lay his hands and pray over an ill woman being wheeled out on a gurney, I knew that it was true.

And it all made sense.

February 12, 2020 046: How the Saints Evangelized a Protestant Pastor and Missionary (w/ Tom and Elli Zurowski)
Recent Comments
0 | Leave a Comment
Browse Our Archives
Related posts from The Cordial Catholic 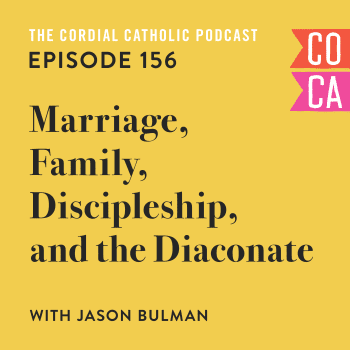 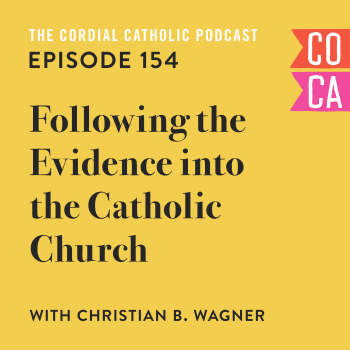