I have never liked discussions about “esoteric” meaning or practice.  “Esoteric” for me is associated with Neoplatonism, Gnosticism, Hermeticism, Kaballah, ceremonial magic (or “magick”), astrology, alchemy, tarot,  spiritualism, and Theosophy, and the philosophies of Jacob Bohme, Franz Mesmer, Emanuel Swedenborg, Helena Blavatsky, Rudolph Steiner, Aleister Crowley, and the “occult” generally: none of which (with the exception of Tarot), have I ever been drawn to.  My objection to much of what qualifies as esotericism is that it seems ungrounded.

I remember coming across an excerpt of a letter from Thomas Carlyle to Emerson in the midst of my searching for a new spiritual practice.  Identifying so much with Emerson’s writing as I did, I received Carlyle’s words as if they were written to me:

“You seem to me to be in danger of dividing yourself from the fact of this present universe, in which alone, ugly as it is, can I find any anchorage, and soaring away after Ideas, Beliefs, Revelations, and such like, into perilous altitudes.  I wish you returned to your own poor century, its follies and maladies, its blind or half-blind, but gigantic toilings, its laughter and its fears, and trying to evolve in some measure the hidden godlike that lies in it.  Alas it is so easy to screw oneself up into higher and ever higher altitudes of transcendentalism and see nothing under one but the everlasting snows of Himalaya, the earth shrinking to a planet, and the indigo firmament sowing itself with daylight stars; easy for you, for me.  But whither does it lead?  I dread always to inanity and mere injuring of the lungs.” 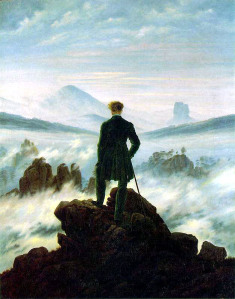 I am reminded of this quote whenever I read “esoteric” discussions of the sephiroth and the like.

I also resented discussions which contrasted exoteric (i.e., celebratory) Paganism with esoteric (i.e., initiatory) Wicca, as I sensed a measure of snobbery in such distinctions.  For one thing, there are other initiatory traditions in Paganism than Wicca.  For another, there is great value in the celebratory nature of Paganism, in and of itself.  For yet another, I believe there is a difference between initiation into a group and and an initiatory experience, which can occur in solitude.

In spite of all of this, my recent attempt to re-dedicate myself has led me back to this distinction and it occurs to me that Pagan ritual can be experienced on several different levels.

The exoteric aspect of Pagan ritual is its celebratory nature.  On this level, which I will call the literal level, Pagan ritual is about celebrating the changing of the seasons and connecting with the Earth.

On a deeper level, which I will tentatively call the symbolic level, the changing of the seasons is experienced as an outward metaphor of inward personal changes.  These can be the changes of the human life-cycle or the ebb and flow of enthusiasm that we experience psychologically.  Through ritual, we recognize that change is unavoidable and that there is a season to all things, a winter and summer, both inside and out.  Part of this is the awareness that we will, one day, die.

Taking this a little deeper still, to what I will provisionally call the spiritual (or pneumatic) level, Pagan ritual can be understood as facilitating the process of individuation.  Pagan ritual can be a therapeutic tool for incarnating, consecrating, and integrating the daemonic/shadow elements of our psyche (esp. libido and destruido) — in Jung’s words, “making the darkness conscious”.

“I don’t mean that you should simply do everything that pops into your head. No. But you shouldn’t harm and drive away those ideas that make good sense by exorcising them or moralizing about them. Instead of crucifying yourself or someone else you can drink wine from a chalice and contemplate the mystery of the sacrifice. Even without such procedures you can treat your drives and so-called temptations with respect and love. Then they will reveal their meaning–and they do have meaning. If you happen to think of something truly mad or sinful again, if you want to kill someone or want to commit some enormity, then at that moment that it is Abraxas fantasizing within you! The person whom you would like to do away with is of course never Mr. X but merely a disguise. If you hate a person, you hate something in him that is part of yourself. What isn’t part of ourselves doesn’t disturb us.”

Pagan ritual, then, on the spiritual level, can be seen as a “procedure” for treating our drives and temptations with respect and love so they will reveal their meaning to us.

And finally, there is another level, a mystical level, in which Pagan ritual is experienced not as an integration of the psyche, but as a (controlled) dis-integration.  I see the psychic life as a cycle consisting of two movements:  The first movement is the emergence (birth) of the ego from the unconscious Mother Goddess. This is the spiritual movement toward increasing individuation, but also increasing alienation, from our Source.  True wholeness requires us to periodically return to the Source and to sublimate our ego.  And this is the second movement, the mystical movement.  This is the oceanic sense of oneness that the mystics experience.  It is the ego death that is the goal of true initiatory experience.  Of course, we cannot remain in that place.  The difference between the mystic and the madman is that the latter does not return from the Source.

Now, these last thee levels, the symbolic, the spiritual, and the mystical, may be considered increasingly “esoteric”, that is “hidden”.  But I believe all four levels are important and none should be neglected. 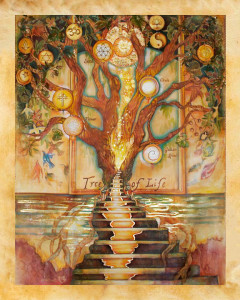 As I was working this out, it occurred to me that these four levels may correspond more or less to the four levels of Jewish exegesis of the Torah, called “Pardes”:

It’s not a perfect fit, but an interesting comparison.

But perhaps it is a poor comparison.  After all, I am beginning to think that Pagan ritual should not be “understood” or “interpreted”, and that it is not primarily about conveying a “meaning”.  Rather, it is something to be experienced: an experience of celebration of and connection with nature; a celebration of and experience of acceptance of change in our own lives; an honoring and welcoming of parts of ourselves that have been neglected or rejected; and an experience of the loss of the sense of self and of union with the transcendent.  And can we really say that any one of these is “higher” or more important than any other?