Pagans in the Pews: Why I go to the Mormon church

I go to the Mormon church about once a month.  Honestly, it is a painful experience for me.  First, it’s boring (to me … just attached that qualifier to everything I say here).  There is no real discussion.  The questions and the answers are prefabricated, as they must be in any religion which claims to have the truth, the whole truth, and nothing but the truth.  Second, I have bad history with the Mormon church.  Frankly, I feel I was lied to.  Not sure by who.  It’s not like someone knew it wasn’t true and lied to me.  They believe it and they told me what they believe and I bought it.  Still, part of me wants to blame someone else for the choice I made and the years I dedicated to the Mormon faith.  Third, some of the doctrines are downright offensive.  Like the time I was sitting there in Sunday School with my (agnostic) dad, who was also visiting, and the teacher starting explaining how we should try to emulate oxen, which are gelded in order to be made docile.  Nietzsche’s saying that for Christians “only the emasculated man is the good man” came to mind with new force.

In spite of all this, I think I have done a pretty good job of being tolerant, not rolling my eyes, and playing nice.  And I don’t think I can ask much more of myself right now than mere respectful tolerance.  Still, my wife knows me well enough to know when I am uncomfortable.  So she told me the other day, rhetorically, that she didn’t know why I went.  That made me wonder myself.

My number one reason for going is because I want my 13 year old son, who identifies as Mormon, to feel supported.  He willingly goes to the Unitarian church with me every other Sunday, but he calls himself Mormon.  And I want him to know that I approve of him, even when I have made a different religious choice.  I asked him just now what it meant to him that I go to the Mormon church with him sometimes, and he told me just what I hoped: that he felt that I supported him, even though I do not agree with the Mormon church.

Second, I go because my wife also attends the Unitarian church with me once a month, and I want her to continue to do so — even though she made that gesture before I did.  Now, honestly I think it is a bigger deal that I visit the Mormon church, because there is much more I find offensive about Mormonism than she will ever find offensive about Unitarianism.  In fact, I’d be surprised if she ever felt the way I feel in the Mormon church when she attended the Unitarian church.

Third, and this is a secret reason, that I even keep from myself most of the time.  I like being her gadfly.  That’s what Socrates called himself.  He was that annoying little pest that would not let people rest comfortably in their social conformity.  When I left the Mormon church, I really hoped my wife would follow me out.  That shows how little I understood her at the time.  Because it just made her dig in her heels.  She even admitted to me that part of the reason she wanted to stay was to spite me, for the pain I caused her when I left without “waiting” for her.  I suspect that it’s easier for her to sit comfortably through patriarchal and overtly sexist Sunday School discussions without me there.  I may not say anything, but my presence is, I think, a reminder to her of the conflict with her own values.  And when she asked me, or rather told me, in a frustrated tone that she didn’t know why I attended, I think part of her must have been asking the same question of herself.  So, in my heart of hearts, one of the reasons (although not the primary reason) I attend the Mormon church to be my wife’s gadfly.

Lastly, I attend for the opportunity to stand proudly next to my family, to look the male members of the Mormon church proudly in the eye, with the confidence that I have grown into something I never could have in the Mormon Church.  They believe that I am less, for having left the Church.  But I know that I am more.

Pagan
“Naturalistic Polytheism and Our Patron Goddess” by Tom...
The Allergic Pagan 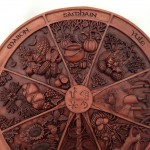 Pagan
A Unitarian Wheel of the Year
The Allergic Pagan 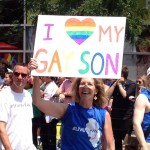 Pagan
I Saw Two Americas Sunday: From a Mormon...
The Allergic Pagan
TRENDING AT PATHEOS Pagan