My love/hate relationship with Neopaganism, Part 1

Why I hate Neopaganism:

#1   I hate magic.  Most Neopagans seem to believe in some form of instrumental or practical magic (i.e., spells).  I have complained extensively about this elsewhere.  Not only do I not believe in the mechanics of “raising energy” or the premise that intention is power, but I find the notion of controlling nature as a religious practice to be discordant with what I understand as the Neopagan ideal of atunement with nature.  I am fortunate to have found a group of like-minded “Naturalist Pagans” and “Humanistic Pagans”.

#2   I hate the “not that kind of Pagan” discussion.  Whenever I publicly identify myself as (Neo-)Pagan, I have to immediately follow that up with several qualifiers.  I watched my wife do this when she identified me as Pagan to her bishop (the local LDS church leader).  She described me as the earth-honoring kind of Pagan, “not the Wiccan kind” of Pagan.  She was 100% correct, of course, but I hate having to add qualifiers.  I would like to have an identifier that speaks for itself without qualification.  For example, my wife does not agree with everything the Mormon church teaches, but she can still unequivocally say “I am Mormon” to others and leave it at that.

#3   I hate the lack of organization.  John Stewart commented on this once on The Daily Show.  When responding in 2004 to an open letter by the Bob Jones University president referring to “the agenda of paganism”, he said, “Dude, pagans don’t have an agenda. They’re pagans. Organizational skills, not their strong suit.”  Being Neopagan seems to be synonymous with a license to start every ritual 30 to 60 minutes late.   I hate that Pagans seem proud of the “herding cats” metaphor.  Good ritual requires structure and planning.  Since no one seems to want to take charge at public rituals, they generally suck.  And the lack of organization means that we cannot present a united front when facing discrimination.

#4   I hate the conflation of Neopaganism with Wicca.  I hate that Paganism has become synonymous with Wiccanate ritual forms and beliefs.  I’ve posted previously about my experience at the “Spirit Circle” discussion group at my local UU church where we decided to talk about “Paganism” and the Christian in the group took it upon himself to announce an open invitation to “Wiccans” to come discuss Paganism with our group.  Then a couple came to the group the following Sunday who identify as “Witches”, but not “Wiccans”, because they are not initiated, even though their beliefs and ritual forms are all Wiccanate.  And then one of them announced that despite the diversity in Paganism, the one thing we all agree on is the Law of Threefold Return.  Sorry, I’m Pagan and I don’t believe in that.  I had to bite my tongue through the whole session.  I feel strongly that Wicca is on the margins, not at the center, of Neopaganism, in so far as it is rooted in the occultist tradition of ritual magic.

#5   I hate crystals.  And incense.  And magic wands.  And fairy art.  And hemp.  And all the other crap that is hocked at Pagan gatherings.  There is some high quality art and craftsmanship which is marketed to Pagans, but 90% of what is sold by vendors at large Pagan events is cheap, ugly, and/or stinky.  More importantly, crystals and magic wands have nothing to do with what I identify as Pagan.

#6   I hate that Paganism is taken as a license to confuse fantasy with reality.  It seems that Pagans feel free to believe any fantasy they want.  You were a Pagan priestess/a burned witch in a former life?  You can see fairies?  You have collect rocks with magical powers?  You can control the weather?  Well, it’s all good because you’re Pagan.  The one rule seems to be that no one is allowed to doubt another person’s authenticity.  I would like my religion to be taken seriously by the mainstream culture, but it never will be so long as there are are Pagans who believe in fairies.

#7   I hate the lack of ritual innovation.  We need to be more brave in deviating from Wiccanate forms for public rituals.  Steven Posch is one of my Pagan heroes for this reason.  He advocates abandoning the “tyranny of the circle”.  He doesn’t call the quarters.  His rituals are simple, evocative, and powerful.  I also admire Ruby Sara and Johnny Rapture, who have published a beautiful collection of alternative Pagan liturgies.

#8   I hate the costumes.  Let me preface this by saying that I love Halloween.  I love dressing up in costume for Halloween.  And even my everyday attire probably has a bit more flair than your average heterosexual male.  But Pagan events are the only place I feel out of place in jeans and a T-shirt.  Everyone else either looks like a hippie, a goth, or like they are celebrating Halloween early.   I want to be taken seriously by the mainstream culture and the fairy wings and wizards’ staffs are a real impediment to that.  I admire Patrick McCollum for representing Paganism in a suit and tie. 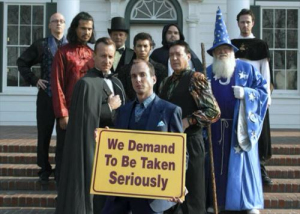 Stay tuned for Part 2: “Why I Love Neopaganism” …