Have I not seen the sky and sea
Put on a look as hushed and stilled
As if some ancient prophecy
Grew close upon to be fulfilled?

I recently came across the following passage from John Trevor’s autobiography, My Quest for God.  In it, he critiques the Unitarianism of his day, and the passage resonated with my own experience.  Now, I have only been exposed to Unitarian Universalism for about two years, I have only visited a couple of congregations, and I have not become an official member, so I am hardly an authority on UUism.  Trevor studied at the Unitarian college at Meadville, so he could speak with a little more authority about the Unitarianism of his time (circa 1878):

It is not my intention to give any details of my student life at Meadville; but of the effect of it all I must say something; and I find it very difficult to know how to say it. From the day I went to Meadville until now I have been enormously indebted to Unitarians for the free opportunity their institutions have provided for my development, and for the greatest personal kindness and help, rendered in a manner which has made it doubly acceptable. My respect for individual Unitarians is unbounded. And yet their religious position as a denomination is one which I have always deeply regretted. For want of something, I know not what, all their freedom, all their knowledge, all their generosity, all their high personal character— everything which seems to mark them out as the one denomination to lead the van of religious and social emancipation—never comes to the point of making them a great reforming power. People, with qualities in many respects far inferior to theirs, are moving the world to-day; while they, perplexed and pained as they are, and anxious to find the road by which they may march forward, are scarcely able to maintain the status of their own churches.

It is with unspeakable sorrow that I write this. Again and again have I felt deeply depressed by the Unitarian situation. Long have I waited to see the passionate Reformer arise among them, who would sweep all hindrances away, and call them forth to follow him into the wilderness where the God of Progress always shrouds himself, save to that heroic faith which determines to find him at all hazards. To throw off the trammels of the past is not enough; there must be the prophetic insight into the future. But not even the trammels of the past are quite thrown off. Unitarianism does not mean Free Religion; it means Free Christianity. It is the last word of the Old Gospel, sifted small through the riddle of the Intellect; not the first word of the New Gospel, bursting up irresistibly from the Spirit.

Unitarians are often heard to say that the reason why they do not make more progress is that other Churches are coming to their position. What does this mean but the conception of a God who tired himself out when he made the Unitarian Church, and now cannot go any further? I should have thought that such a statement would have startled such an advanced body into calling upon God for marching orders to take up a more dangerous post, even if they had to leave their tents behind them. But the statement is repeated year after year, and nothing happens. There is one thing needful to Unitarians. God alone knows what it is, but he does not tell them. Is it for want of their asking?

Yet they are so ready, individually, to help those who do go out into the wilderness, as I know well by my own experience, and as I am sure many another must know also. From the general tenor of their preaching you would suppose that living Faith might now give way to enlightened religious opinion—that enthusiasm and personal abandonment were no longer characteristics of divine fellowship. From their practice you will find that men of no other denomination are so ready to give their money, not only to undenominational purposes, but to work which they admire because of its enthusiasm and yet cannot wholly agree with. Why God has given a Church so many virtues, and yet not chosen it to do the rough work at the front to-day, is to me a very perplexing mystery.

Even though Trevor was writing about Unitarianism 130 years ago, his observation about Unitarians being “scarcely able to maintain the status of their own churches” is still timely.  A few months ago, The Wild Hunt blog posted an article on the shrinking numbers of UUs: currently 162,800 members, down 1,400 from last year.

Some things have changed though.  Trevor felt that Unitarianism had not gone far enough in leaving behind its Christian roots.  But that was before the humanist revolution in Unitarianism and the growth of Buddhism and Paganism in UU congregations.  Today, Christians seem to have a tougher time than Pagans in the UU.

What struck me about Trevor’s description of Unitarianism, though, was his observation that there seemed to be something missing from Unitarianism, something undefinable yet essential.  I have the same impression, although for a different reason.  I know I am not alone.  If you asked 10 Unitarians what that missing thing was, probably they would all know what you were talking about, but they would all have different answers. Trevor bemoaned the failure of the Unitarian church to take an active role in social action.  I don’t know that the same could be said today.  In fact, in my congregation at least, social action seems to be emphasized over other things, like spirituality.  For me, this is what is missing from UUism: spirituality.

I would tentatively define spirituality in David Tacey’s terms: a “transformative relationship with the sacred” [The Spirituality Revolution (2004)].  Tacey goes on to contrast spirituality with fundamentalism.  The former can tolerate ambiguity and uncertainty in the experience of the sacred.  It is born out of a respect for mystery and a desire for relationship.  The latter seeks certainty and absolutes, and is born out of fear and the need to possess.  It is a good distinction to draw, but I think Tacey should also have contrasted spirituality with secularism, which I tentatively define here as the rejection of the sacred as a valid category of experience.

The first of the “Six Sources” that UUism draws upon is:

Direct experience of that transcending mystery and wonder, affirmed in all cultures, which moves us to a renewal of the spirit and an openness to the forces which create and uphold life.”

I think it is significant that this is the first Source, before “wisdom from the world’s religions” and “humanist teachings”.  And yet, I find very little affirmation of that “transcending mystery” in my UU congregation.  In fact, when it is spoken of, it seems to be with a little bit of embarrassment and hesitation.  I was raised in a religion (LDS) is which it was normal and expected for one to “testify” and to share spiritual experiences (so long as they were “faith promoting” — that is, promoting of the LDS faith).  Neither the absence of reference to deity nor the absence of prayer seem so strange to me as the absence of expressions of personal experience of the sacred in UU services.

I recently attended a UU service where the speaker observed that Unitarian can’t really sing their hymns, because they are too busy reading ahead to make sure they can intellectually assent to all of the lyrics before they sing them.  That got some laugh’s, but I admit I’ve done it myself.

That joke reminded me of a scene in Chaim Potok’s book The Promise which I read years ago.  In his books, Potok writes about the Hasidic Jewish community in New York after the second world war.  The Promise is about a young rabbinical student, Reuven, who feels torn between the traditionalism of the Hasidics and his liberal academic studies.  He struggles to reinterpret the scriptures in a way that is “relevant” for the modern world without destroying the tradition which he loves.  He does love Judaism, and he even continues to observe the rituals, which he says have some intrinsic value for him, even though he does not believe in the theology.

At one point, near the end of the book, Reuven and his professor father return from a Hasidic wedding of Reuven’s best friend.  Reuven laments the closed-mindedness of the Hasidics.  And then the father responds: “Can you see them listening with joy to the critical method? … Will new ideas enable them to go on singing an dancing.”  Reuven responds, “We cannot ignore the truth, father.”  And Reuven’s father replies, “No, we cannot ignore the truth.  At the same time, we cannot quite sing and dance as they do.”

Those words stuck with me profoundly.  Reuven’s father went on: “That is the dilemma of our time, Reuven.  I do not know what the answer is.”  At the time I read this, I was leaving the Mormon church and I was feeling quite acutely how I could no longer “sing and dance” with the Mormons.  Perhaps I was more intellectually honest, but what had I given up in the process?

I feel the same way about UUism.  They can’t dance.  They can barely sing.  And this is what draws me to Paganism.  Pagans can dance!  But at the same time, I struggle with some of the same intellectual problems in Paganism that I struggled with in Mormonism (i.e., magic). 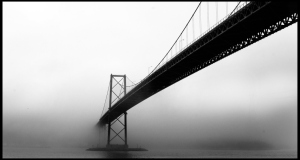 In The Promise, Reuven describes himself as occupying an “invisible connecting span” stretched over a deep chasm between two worlds, a bridge which he does not know how to make “tangible” either to himself or the inhabitants of the two worlds.  I left Mormonism when I found myself on that bridge, and I find myself there again — caught between passion and integrity, vision and discipline.  Walter Kaufmann writes in his Critique of Religion and Philosophy:

“Undisciplined vision, unexamined intuition, and sheer passion are the fountainheads of madness, superstition, and fanaticism.  And cleverness and patience without vision are the expense of spirit in a waste of subtlety.”

I agree with Reuven’s father.  This is one of the dilemmas of our time.  This is where I stand.  A romantic and a rationalist.  Perhaps the “twilight, in-between life” that Reuven sought to carve out for himself is the only place for me too.  Life does seem to happen in the space between absolutes.  So perhaps I should cultivate that space.  And if I cannot make it “tangible” to those in the two worlds which I am caught between, at least I can try to make it tangible for myself.

November 30, 2011
D.H. Lawrence on symbols and metaphors
Next Post

Pagan
“Naturalistic Polytheism and Our Patron Goddess” by Tom...
The Allergic Pagan
TRENDING AT PATHEOS Pagan