Navel gazing versus the journey to the World Navel: Individuation and community

Navel gazing versus the journey to the World Navel: Individuation and community September 13, 2012 John Halstead

Jungians are sometimes accused of being ego-centric navel gazers in the Pagan community.  There is a certain truth to this.  Jung wrote that

“every step towards fuller consciousness removes [a man] further from his original, purely animal participation mystique with the herd, from submersion in a common unconsciousness. Every step forward means tearing oneself loose from the maternal womb of unconsciousness in which the mass of men dwells. [… He] has estranged himself from the mass of men who live entirely within the bounds of tradition. Indeed, he is completely modern only when he has come to the very edge of the world, leaving behind him all that has been discarded and outgrown …” (“The Spiritual Problem of Modern Man”, Collected Workds, vol. 10, para. 150).

But technically Jungianism is not ego-centric.  It may be fairly called Self-centric, but only in the sense in which “Self” refers to the “Big Self” distinguished from the ego.

Jung wrote that individuation should not be confused with individualism:

“Again and again I note that the individuation process is confused with the coming of the ego into consciousness and that the ego is in consequence identified with the self, which naturally produces a hopeless conceptual muddle. Individuation is then nothing but ego-centredness and autoeroticism. But the self comprises infinitely more than a mere ego, as the symbolism has shown from of old. It is as much one’s self, and all other selves, as the ego. Individuation does not shut one out from the world, but gathers the world to itself.”

Nevertheless, Jungian practice is unavoidably introspective.  This raises the question of what responsibility Jungians feel toward the community.

Recently I came across a quote from Jung’s 1916 essay, “Adaptation, Individuation, Collectivity”.  In this excerpt, Jung acknowledges that individuation (the process of integrating the conscious ego with the unconscious Self) is, in some sense, a separation from the collective.  Individuation, he says, “means stepping over into solitude, into the cloister of the inner self.”  However, he goes on to state that individuators have a responsibility to create new values for the community:

“Without this production of values, final individuation is immoral […]

“Not only has society a right, it also has a duty to condemn his individuation at the cost of an equivalent work for the benefit of society, for he is a deserter. […]

“[I]nner adaptation leads to the conquest of inner realities, from which values are won for the reparation of the collective.  Individuation remains a pose so long as no positive values are created.

“The individual is obliged by the collective demands to purchase his individuation at the cost of equivalent work for the benefit of society.”

Thus Jungian John Dourley writes that “The individual’s growing into one’s personal myth in the analytic process is never a solipsistic event.  Such growth is a significant social resource because it provides society with individuals endowed with the critical perspective that only living out their personal myth affords.”  Of course, this presumes that an individuated individual will make themselves available to society as a resource in some manner.

The the idea that the individuator has a responsibility to return to the community recalls Joseph Campbell’s outline of the “monomyth” in The Hero With a Thousand Faces.  Campbell, a follower of Jung, applied Jung’s ideas more broadly to his study of world mythology.  In The Hero, Campbell writes that the journey of the mythological hero follows the same pattern across cultures: “a separation from the world, a penetration to some source of power, and a life-enhancing return.”  The descent of the hero/heroine into the “belly of the whale” parallels the journey of the individuator into the deep Self.  Campbell identifies this place with the “World Womb” and “World Navel” — thus it the hero/individuator may be fairly called a “navel gazer”, but the “navel” here is a cosmic one.

After penetrating the sacred source, the hero/heroine must then fight his/her way back to the mundane world.  But to what end?  Campbell writes, “the hero comes back from this mysterious adventure with the power to bestow boons on his fellow man.”

“When the hero-quest has been accomplished, through penetration to the source, or through the grace of some male or female, human or animal, personification, the adventurer still must return with his life-transmuting trophy. The full round, the norm of the monomyth, requires that the hero shall now begin the labor of bringing the runes of wisdom, the Golden Fleece, or his sleeping princess, back into the kingdom of humanity, where the boon may redound to the renewing of the community, the nation, the planet or the ten thousand worlds.”

Note, however, unlike the hero’s journey, individuation is not a one time event, but an ongoing process requiring successive immersions in the deep self, followed each time by a life-renewing return.

Even while acknowledging the responsibility of the individuator to the community, this process still seems somewhat one-sided.  It seems to me that the cycle, to be complete, must include a second transformation of the individual, by contact with the community.  This is true even if the response of the community is one of rejection.  (Consider Plato’s allegory of the cave or story of Jesus’ crucifixion.)

The diagram below depicts this somewhat better, portraying the monomyth not as a one time event, but as a perpetual cycle, and including two different points of transformation, one in the realm of the deep Self and one in the world of society. 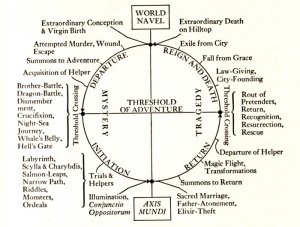 September 17, 2012 Check out B.T. Newberg's new blog at Pagan Square
Recent Comments
6 Comments | Leave a Comment
"Ironically, the pagans have stumbled upon evidence that there will be an Armageddon exactly when ..."
The Penitent Man Shall Pass Call for a Pagan Community Statement ..."
"John H.Halstead...Someone wrote or said. Be the change you want to see in the world. ..."
Toni Stamps 13 Things You Don’t Need to ..."
""petty and defensive"?: "Are you foolish enough to think christianity is the elder?""
John H Halstead 13 Things You Don’t Need to ..."
"Attack? This isn't my faith :)Is it yours? You come accross more christian....petty and defensive."
Toni Stamps 13 Things You Don’t Need to ..."
Browse Our Archives
get the latest from
Pagan
Sign up for our newsletter
POPULAR AT PATHEOS Pagan
1

Pagan
“Naturalistic Polytheism and Our Patron Goddess” by Tom...
The Allergic Pagan
TRENDING AT PATHEOS Pagan