Home Is Where You Find Your Gods

There are many ways to define one’s religious identity.  It might be defined in terms of shared values.  Or the expression of those shared values in group practices.  Yvonne Aburrow’s recent series on dual-faith practice drew my attention to a 2007 post by Peter Bishop published @ Quaker Pagan Reflections where he defines religious identity in terms of having received divine communication in that setting:

“God (the Divine, the Gods…whatever you want to call Him/Her/It/Them) calls to us. Divinity “bleeds through” from the realm of the Divine into our world. Pagans invoke it loudly, Quakers listen for it quietly, both have to work at discernment but can usually recognize sooner or later when it whacks them upside the head. And both groups have formed enduring, vibrant communities centered on the experience of the Divine. Like all communities, Quakers and Pagans have social norms and expectations, and they each have their interplay between the group’s values and the values that individual members bring. But Pagans and Quakers also share direct input from Outside, and this changes EVERYTHING.”

Peter then relates his experience of divinity in a Quaker context that, for him, constituted his conversion.  He concludes:

“When I say I am a Quaker, it is because I have been a conduit for the Divine in that context. Once I’d had the experience of…well, call it “drawing down the Light,” the rest was just a formality. My clearness committee tested that leading and concurred, but I’m not a Quaker because they said so. I’m a Quaker because I listened for the presence of Spirit in the silence, and It spoke through me, and that’s what Quakers do. Just like I’m Wiccan because I invoked the presence of the God in circle and He came to me, and that’s what Wiccans do.“

I really liked this understanding of identity in terms of the context of the experience of the divine, and I’ve been meaning to blog about it for a while, but something held me back: it was the possible implication that, in order for one to be a Pagan, one must have a certain kind of experience of the divine.  I don’t think that Peter meant that at all, but his post could be taken that way by some.

I’ve confessed here before that the most powerful religious/mystical experiences of my life occurred when I was Christian, not when I was a Pagan.  But Christianity is no longer my spiritual home.  In fact, I felt saved by Jesus before becoming Pagan.  Ironically, that experience marked the end, not the beginning, of my commitment to Christianity.  (Maybe a powerful transformative experience in a Pagan context will mark the end of my association with Paganism.)

Since becoming Pagan, by spiritual experiences have been more subtle than spectacular.  While, like Wordsworth in his poem “The World is Too Much With Us”, I would rather be a Pagan “standing on this pleasant lea […] Have sight of Proteus rising from the sea; Or hear old Triton blow his wreathed horn”, the truth is that my experience of divinity now is more like his poem “Tintern Abbey”:

And I have felt
A presence that disturbs me with the joy
Of elevated thoughts; a sense sublime
Of something far more deeply interfused,
Whose dwelling is the light of setting suns,
And the round ocean and the living air,
And the blue sky, and in the mind of man;
A motion and a spirit, that impels
All thinking things, all objects of all thought,
And rolls through all things.

I don’t mean to downplay the value of these experiences.  I recently had two exhilarating spiritual experiences during a trip to California, one in the Muir National Forest: 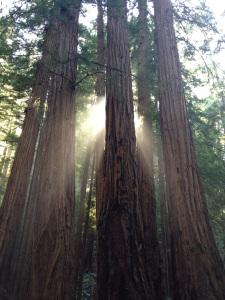 and another on the Route 1 coastline: 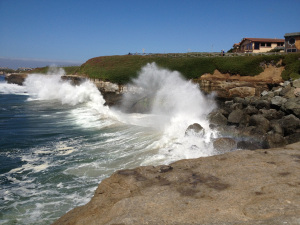 Many Polytheists leave no doubt that they consider a direct encounter with a deity (not divinity, but a personal deity) to be a prerequisite of Pagan/Polytheist identity, and look down their noses at those of a more pantheistic persuasion.  For this reason, I have been reluctant to Peter Bishop’s post above.

But then I came across this post, “Paganism, Litmus Tests, Validity, and the Internet”, by The Druid in the Swamp.  “The Druid” explains how a “selection bias” on the Internet can create the impression that a higher percentage of Pagans have had powerful mystical experiences than actually have:

“There are lots of people on the internet – on blogs, forums, and mailing lists – who like to talk about their mystical experiences. This is pretty natural. For one thing, when you’re first encountering something new and exciting (much like when you’re in the first, budding, exciting stages of a relationship) you want to talk about it all the time! You want to share how wonderful it is! […] It becomes self-perpetuating as well, as everyone struggles to talk about THEIR mystical experiences, and the impression given is that everyone has these deep and powerful religious experiences (and frequently!) and that somehow you’re not “in” the group if you’re not having them. […]

“[…] our natural proclivity to talk about things that are happening to us (especially things that we think are special) – and to keep silent in discussions where we don’t have anything to add – gives the impression that *everyone* in ADF has all these amazing mystical experiences all the time (since someone is regularly talking about it on the lists) and that part of being a Druid is having a deeply personal, deeply mystical relationship with the Kindreds.”

“The Druid” does on to explain that while many Druids and Pagans have these personal relationships with spirit beings that may talk in their ear sometimes,”many OTHER Druids and Pagans (equally as many, I’d guess, if not more) are there because the act of devotion is what centers and grounds their practice.”  (emphasis original).  I would probably fall within this description, since I derive intrinsic value from my practices.  “The Druid” goes on to say that there is a place for both kinds of Pagans: “the quiet, every day, ground-and-center, worship on their landbase, remember the High Day Pagans” and “the devoted spirit workers, the god-touched, and the deeply mystical”.  In short, there is no litmus test.  (Also worth checking out are the links that “The Druid” includes: here and here and here.)

While I admit I am a little suspicious of those those who claim to have regular and dramatic interactions with their deities, I will not, as a rule, deny the validity of such experiences just because I have not had them or not had them with the same frequency or intensity.  On the other hand, neither will I accept the proposition that an absence of such experiences necessarily constitutes a failure . . . of will, of imagination, or of devotion.  There is the question of being open to an experience, but plenty of people are broadsided by spiritual experiences they were not open to.  Mostly, I think whether someone has a certain type of spiritual experience is more a function of personal psychology and fate (or accident).

In any case, whether I ever have such experiences in a Pagan context, I know that there is something that I can learn from those who have.  I have been powerfully moved by those brave enough to share such personal experiences publicly.  My own spiritual horizon has been broadened by hearing the experiences of others — especially the experiences of polytheists, whose experiences are more foreign to me, who emphasize the transcendence or otherness of divinity more than the pantheists with whom I relate more, who emphasize the immanence of divinity.  And I hope that others have benefited from my sharing of my own experiences.  Whether we believe that the worship of the gods is the quintessence of Paganism or whether we believe Paganism is about something else, the fact is that both sides of the discussion have something to teach each other.

And to bring this full circle, I still relate with Peter Bishop’s way of defining his Pagan identity, though I have not experienced divinity in any public Pagan ritual.  But I call myself Pagan because I have found God/dess in the dark recess of my soul and in the living world around me.  And the desire to unlock the mystery of the connection between these two temples drives me forward:

“The mystery of the cosmos before which our mind stands in awe becomes one with the mystery within us by which we ethically strive; and both come together in the sense that somehow, in a way inexpressible to us, it is all meaningful.” – William Barrett

April 19, 2013 Quote: The path to heaven
Recent Comments
5 Comments | Leave a Comment
Browse Our Archives
get the latest from
Pagan
Sign up for our newsletter
POPULAR AT PATHEOS Pagan
1