I’ve been playing with the idea of doing a Balder myth-themed autumn equinox with my family for over a year now.  Our previous equinox celebrations focused on the myth of Osiris, but something about the Balder myth called out to me to be turned into a ritual.  Also, I wanted to do something a little less didactic than my other rituals: more doing and showing, and less explaining.  There’s still plenty of talk in this script, but almost all of it is in the form of storytelling.  So here is my script for our family autumn equinox celebration for this year.  Reconstructionists be forewarned: I took major liberties with the myth.  The poetry comes from Valhalla: The Myths of the Norseland by Julia Clinton Jones (1878).

This ritual takes place on the shore of Lake Michigan near where we live.  We stand or sit in a circle around a candle or small fire.

“Today we celebrate the fall equinox, when the nights grow longer than the days.  We say goodbye to the summer and welcome the fall.  It is a day we commemorate the defeat of the Sun King by his dark twin.  We remind ourselves that death is a necessary part of life.

“Today we’re going to tell the myth of the death of the Norse god Balder.  The Norse people lived in Scandinavia.  They were the Vikings.  Some of their gods you probably know from movies: Thor, the god of thunder, Loki, the trickster god, and their father Odin, the king of the gods.  Another one of the sons of Odin was Balder.  This is his story:

“Now recite after me:

Of all the twelve gods round Odin’s throne,
Baldur, the Beautiful, alone,
The Sun-god, good, and pure, and bright,
Was loved by all, as all love light.

“Now each of you close your eyes, while I return to our story:

“One day, Balder came to his father Odin and told him that he had not been sleeping well.  He had been having disturbing dreams.  Odin went to a seer-woman to learn the meaning of the dreams.  The seer woman told Odin that Balder would die.  Now, the gods could not die of old age, but they could sometimes be killed.  And seer woman said that Balder’s death would be the beginning of Ragnarok, the end of the world and the death of all the gods.  Odin returned and told this terrible news to his wife Frigga.”

“Now open your eyes, while I return to our story:

“Now each of you go and find something to make the promise and bring it back to our circle.  You may bring back a rock or a leaf or anything else you find.

“For each item brought to the circle say: ‘The _____ shall never harm Balder the Bright.’

“In addition to the items you brought to the circle, one of you bring the sand from the beach, the water from the lake, the air from all around us, and the fire before us.  Then recite: ‘The _____ shall never harm Balder the Bright.’

“Now to return to our story: Frigga even made Loki promise not to harm Balder.  Now Loki liked to create chaos and destruction.  So when Frigga came to him, he made the promise, but he hid a branch of a holly* plant behind his back, so Frigga did not see it.  And the holly plant did not make the promise.”

[* Note: I’ve substituted holly for mistletoe because it actually grows in my region and is associated in the Neopagan mythos with the King of Winter, the Holly King.] 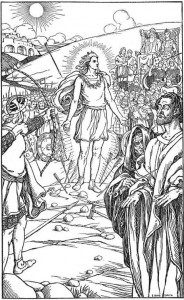 “Now all of us will find rocks on the beach and we will throw them at the sun and try to hurt the sun.

“Now to return to our story: And then it came time for Hodr, the god of winter, to have his turn throwing something at Balder.  Hodr was blind, so Loki volunteered to help him.  Loki wrapped the Holly plant around Hodr’s spear.

“All of you will close you eyes and I will blindfold you.  And then I will hand each of you a holly branch.  Feel the prickliness of the holly with your fingers, and think about the unpleasantness of wintertime: the biting cold, the long, dark days.  Now we will go around the circle and each one of you will share something unpleasant about wintertime.”

“Now to return to our story: When Hodr threw the spear at Balder, the spear bounced off of him, but the thorn of the holly pricked his skin.  Balder quickly grew weak and collapsed.  All the gods gather around him and tried to help him, but they could not save him.  And Balder died.” 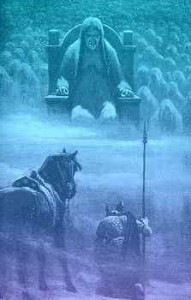 “Odin was determined to bring Balder back to life.  But only one god had that power, the goddess of the underworld, called Hel.  So Odin sent the messenger god, Hermodr, to the underworld.  And he gave Hermodr his eight-legged horse.  And Hermodr took the road to Hel, and Odin’s horse jumped over each of the seven gates of Hel.

“And when he arrived, he asked Hel to return Balder to life.  Hel answered him and said that Balder could return to life if everything on earth wept for him:

Let all things from fair Nature’s birth,
Breathing or breathless, on the earth.
For him, throughout creation, mourn;
And then your Sun-God shall return.

“So Hermodr returned to the Upper World and told the gods what had to be done.”

“So the gods went out and told every thing about the death of Balder: all the people, and all the animals, and all the plants, and all the elements, from the largest to the smallest.  And each thing wept for him.

“Gather together all the things you brought together before.  For each thing brought to the circle say, “The ____ weeps for Balder the Beautiful.’

“I will now mark each of your foreheads with ashes from our Mid-Summer fire to show that you are in mourning.

“To return to our story: But when the gods came to Loki, he turned himself into a giant.  And when the gods told him about Balder’s death, the giant wept.  But when the godz left, Loki turned back into himself.  The giant had wept for Balder, but Loki had not.  And Balder remained dead.”

“So the gods gathered together for Loki’s funeral.  Now the Vikings sometimes buried their dead at sea and set the boats on fire.  So the gods built a boat and put Balder on it.  And Balder’s wife Nanna died of grief.  And they placed her in the boat with Balder. 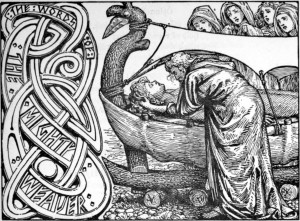 “And before they launched the boat, Odin approached the body of his son, and he bent down and whispered something in Balder’s ear.  Ever since that day, all the gods and all the wise men and women have wondered what Odin whispered into Balder’s ear.

“Each of us has brought something that reminds them of summer: a leaf or  piece of fruit.  Each one of use will place our offering in the boat which I have made.**  And as we do so, each of us will whisper something to the summer season which we are sending away.  Take a moment and think about what you would like to say before you proceed.”

“Now recite after me:

On the greatest ship’s giant prow
Baldur the Beautiful they laid, —
The burning ship must bear him now
Thro’ gloomy skies of gathering shade;

Dull yellow fringe on pale gold shroud
Gleamed coldly ‘neath the wintry cloud.
Then Odin lit the funeral pyre, —
Out to the north, in streams of fire,

To lengend’s call his spirit sailed,
While Nature’s heart his loss bewailed.
Ne’er shall the mild god hasten home
Till the end of the world be come.

“We will now carry the boat to the water.” 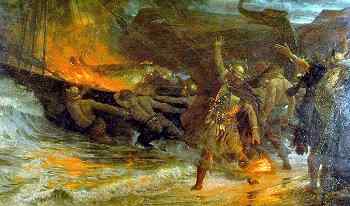 I then ignite the boat and launch it.  Ideally, the boat will burn for a while and then sink below the water.***  (In reality, it was capsized by the waves after two seconds.  I’m working on alternatives for next year.)

“As the boat burns we listen the following song, “10,000 miles” by Mary Chapin Carpenter.  There is a pause after each line, so we will repeat each line after the singer sings it.”

Fare thee well
My own true love
Farewell for a while
I’m going away
But I’ll be back
Though I go 10,000 miles

[*** I use an accelerant, like isopropyl rubbing alcohol, to ignite the contents.  A long piece of fishing line will be tied to part of the “boat” so it may be retrieved once it sinks below the water.]

September 21, 2013
Cherish Our Polytheists: The balkanization of our community and what is at stake
Next Post

September 28, 2013 What a Pagan can tell you about whether Mormons are Christian
Recent Comments
2 Comments | Leave a Comment
Browse Our Archives
Related posts from The Allergic Pagan

Pagan
It Should Have Happened on a Mountaintop: My...
The Allergic Pagan
TRENDING AT PATHEOS Pagan