The Power of Simple Gestures

When it comes to ritual, I sometimes feel like I make a terrible Pagan.  I dress like a square.  I take forever to learn a chant.  My sense of rhythm is … well, I don’t have one.  And if incense is burning (and it usually is), I’m likely to need to blow my nose frequently.  Bottom line, you really don’t want to be standing next to me in a ritual.  What’s more, I sometimes suspect that everything about my posture and facial expression at Pagan ritual screams self-consciousness.  What can I say?  I’m a work in progress.  Part of the problem, I’m now realizing, is that I’ve had no formal training.  I came to Paganism through books, and few of those books were practical.  And while I have since participated in a lot of group rituals, I have never joined any Pagan group.  As a consequence, many of the things that other Pagans take for granted are completely unfamiliar to me.

Take for example the simple, but almost magical, power of physical gestures.  I discovered this at my very first public Pagan ritual.  It was a CUUPS Imbolc ritual.  While I had read about most of the elements of the ritual in books, it’s something else to actually do it physically, and quite another to do it with a group.  I can’t say I got very much out of that first ritual.  I was highly self-conscious and struggling not to look like a tourist.  But I did pick up one thing: the power of simple gestures.

As we stood in the circle, calling the quarters, I noticed several, but not all, of the participants standing with their arms extended at their sides, palms out.  “That’s interesting,” I thought to myself, “I wonder why they are doing that.”  It was obviously a deliberate action, but I didn’t know what the purpose of it was.  I’m not usually one to do something unless I understand the reason first, but this time I took a chance and followed suit.  I extended my arms at my sides and turned my palms outward.  Immediately I felt a change.  I felt something happening inside of me.  I felt less guarded, more open.  I felt more connected to the other people in the room. I felt more open to the possibility of the ritual.  All this just with a simple gesture!

This was new to me, so I wasn’t completely convinced right away.  I decided to experiment.  I turned my palms back toward my body, and the sense of openness diminished.  I felt like my sense of awareness, which had previously extended outward into the room, “sucked” back into the physical boundary of my skin.  And when I turned my palms outward, the expanded sense of awareness returned.  Sure enough, this simple gesture was changing my experience in a profound way.”

After that ritual, I began to experiment with gestures in my private rituals ritual.  I’ve always been a believer in the power of words, especially spoken words.  As Ruby Sara has written:

“for me there truly is no difference on a metaphysical level between poetry and magick – they are the same movement, and you cannot have true magick without poetry (or true poetry without magick). Poetry is the language of magick, it is magick given voice and form. On a practical level, the human voice is a critical instrument in various manner of spellcraft, as is language… history bears this out thoroughly I think… and in my experience, spellcraft is hugely enhanced by applying to it the music and rhythm and articulate beauty of invocative, resonant poetry.”

But I have discovered that the power of words in ritual is inversely proportional to their number; generally, the more wordy a ritual, the less powerful it is.  I think that’s why that poetry is powerful; it says more with less.

But words aren’t always sufficient.  I have realized that there is real power in simple gestures.  When I greet the sun in the morning, my experience of the ritual is deepened by the simple act of extending my arms and slowly raising them as I recite the invocation, “Scaling heaven, splendor encompasses you …”  And when I want to involve my whole body, I do a variation on the yoga Sun Salutation — modified to accommodate my limited flexibility.  I’ve also experimented with using modified mudras (finger/hand gestures) in my chakra meditation, using my hands to help me focus on and connect with a specific location in my body.

This realization of the power of gesture mine has extended beyond formal ritual.  More and more I am aware of the position of my body and how it unconsciously expresses how I am feeling, and even more importantly, how I can change how I am feeling by simply changing the position of my body.  It is common for me when I am sitting down and talking with others to throw my right arm across my body.  This is an unconscious protective maneuver.  By consciously resting my arms instead at my side, exposing my abdomen, I am opening myself to the other people in the room.  It feels more vulnerable, but I am also more open to sharing and to changing. 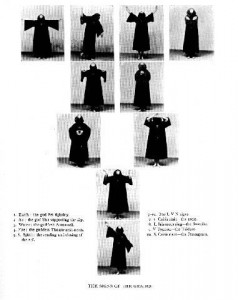 Gesture magic has a long history in the occulture, from simple gestures to complex body postures.  In the ceremonial magic, there are symbolic gestures and postures which are called the “Signs of the Grades”, like the Sign of Horus, the Sign of Osiris Slain, the Sign of Isis in Welcome, the Sign of the Earth, the Sign of Water, and so on.  In Wiccan practice, the God Posture is the position taken when invoking the God.  It is similar with the Golden Dawn “Sign of Osiris Slain”: legs and ankles together, body erect, arms folded across the chest.  The head may be bowed to represent the dead Dead or raised to represent the God reborn.  The Goddess Posture, taken when invoking the Goddess, resembles the “Sign of Isis in Welcome”: standing with the legs spread wide apart and arms raised up an angle so that the limbs form an “X”.    Assuming these postures, especially in a ritual context, can have a profound psychological effect, demonstrating the unity of the body and mind.

None of this will be new to many of my readers who have had a lot of personal interaction with communal Pagan ritual.  But for those of us, like me, for whom Paganism was first an intellectual exercise, the discovery of the somatics of ritual was like the experience of cataracts removed, a whole new world was opened up, one that my vocabulary still struggles to accommodate.

While I was researching for this essay, I came across an interesting ritual online which uses only gestures for calling the quarters.  Below is my variation on the ritual.  You can accompany the gestures with words or visualizations if you like, but I found the experience of a wordless ritual comprised of only gestures to be a unique learning experience.  Of course, if these particular gestures don’t work for you, substitute your own.  It’s not the gestures themselves that are magic, but the way they make you feel. 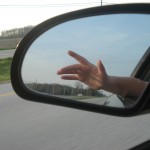 Face towards the east.  Keeping your arms at your sides, raise your hands to chest level with your palms pointing away from you. You can extend your arms fully or bend your elbows slightly. Spread your fingers out, but keep your hands relaxed, like you would if were are riding on a motorcycle or in a car with your hand out the window, feeling the air moving through your fingers.

Face towards the equator (south in the northern hemisphere).  Tilt your head back and turn your gaze upward.  Raise your hands all the way above your head.  Your elbows should be straight, fully extending your arms.  Spread your fingers as far as you can.  Bring your thumbs together and then bring your index fingers together to form a diamond shape, while keeping your fingers splayed.  Tilt your wrists back.  Imagine a line stretching from the center of your forehead (Third Eye) through the center of the diamond formed by your fingers and to the sun or North Star far above. 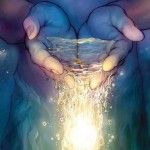 Face toward the west.  From the previous position, level your head and gaze.  Bend your elbows and lower your hands down to chest level, while turning your palms upward and cupping your hands together.  This should be done in one fluid motion.  Slowly raise your hands like you would if you were scooping water from a waterfall.

Face towards the pole (north in the northern hemisphere).  Turn your gaze down.  Hold out your hands at waist level with your palms facing downwards, parallel to the ground.  Place one hand over the other in front of you, keeping your palms facing down (like you are preparing to perform chest compressions in CPR).  Your hands should now form two overlapping planes.  Press your hands together.  Feel how the two forces interact to create a firm foundation. 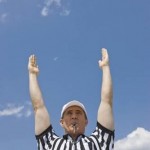 Lean your head back and turn your gaze upward again.  Raise both hands up towards the sky, palms inward (like a football referee making a field goal sign).  Point your fingers toward the sky.  Hold that position.  Now turn your gaze downward while you lower your projective or dominant hand to point your fingers at the ground.  Keep your receptive, non-dominant hand where it is above you.  Hold that position.  Now raise your gaze again while you lift your projective hand towards the sky, simultaneously bringing your receptive hand down.