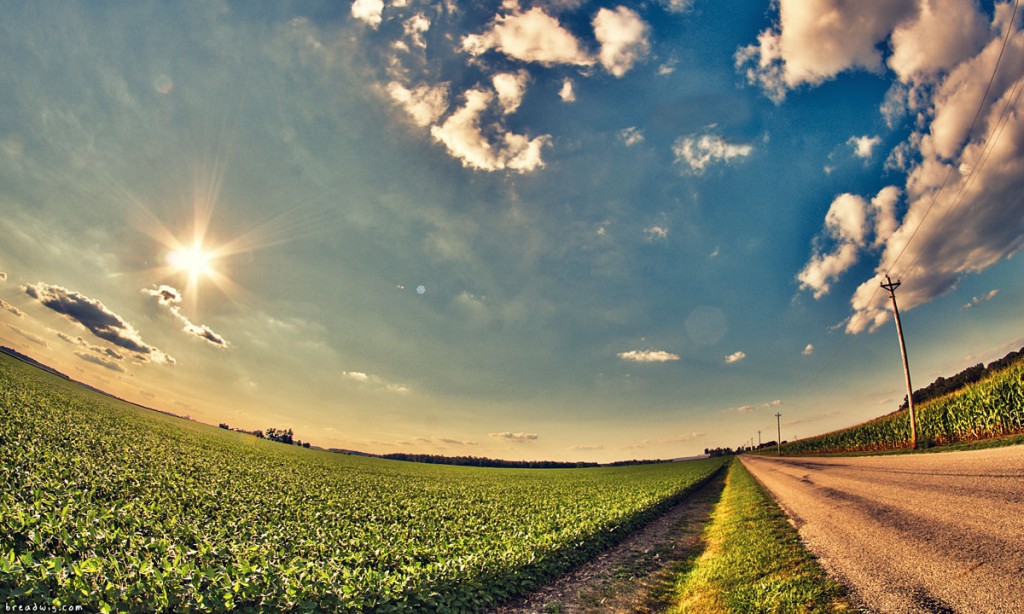 I remember when I was in high school and Indiana changed its license plate to include the phrase “Amber Waves of Grain”.  It pissed people off.  I mean, really pissed people off.  Because in Indiana, we grow corn and soybeans, not wheat.  While technically corn is a grain, it’s not amber.  While the phrase was poetic, it just did not speak of “home” to the people of the Hoosier State.  That’s kind of how I feel about Lughnasadh.

Lughnasadh or “Lammas” is celebrated by many Pagans this weekend.  Many call this day the “first harvest”.  Mike Nichols begins his much-quoted article on Lammas this way: “Although in the heat of a Mid-western summer it might be difficult to discern, the festival of Lammas (Aug 1st) marks the end of summer and the beginning of fall.”  Have you ever wondered why it seems like nearly every description of a Pagan sabbats begins with a disclaimer like this, explaining why it’s not really the season that we are celebrating?

I live in the Midwest.  Right now, as I write this, it’s 88 degrees.  It’s just started to get warm in the last few weeks, and it is going to keep getting hotter though August.  We are approaching the height of summer, not the beginning of autumn.  And the “harvest” — which in Indiana means corn and soybeans — won’t be for a couple of months still.

So where does all this Lughnasadh autumn harvest talk come from?  It’s not true for the Midwest, or for Cascadia, or for Paganistan, or for the Bay Area (which has its own microclimate), or for any other place that I know of where there is a large Pagan population.  Maybe it’s accurate for the British Isles, but the majority of Pagans live outside the U.K.  Seriously, how long are we going to keep pretending that that we live in the same climate as Gerald Gardner did?

If I went to a public Pagan ritual this weekend, most likely someone would give a little homily about the meaning of the day.  They would begin by explaining the meaning of the names “Lughnasadh” or “Lammas”, either etymologically or historically, and then explain how Lughnasadh is about sacrifice or some other harvest analogy.  But the whole process is completely backwards.  Instead of attuning ourselves to the actual cycles of nature, we end up trying to attune ourselves to an artificial cycle derived from a hodgepodge of Celtic lore and rural British customs.  Rather than the seasons turning the Wheel of the Year, we are letting the Wheel turn the seasons.  As a result, every explanation of a Pagan holiday has to begin with a disclaimer about why the holiday doesn’t match up with what our senses are actually telling us.

This is not just a question of flipping the Sabbats on their heads for those in the southern hemisphere.  (It boggles my mind that anybody ever argued about that.)  The fact is that the seasons vary from place to place.  Some places don’t even have four season.  There may be only two or three, or there may be five or six.  Just check out this article by Peregrin Wildoak describing six seasons in Perth, Australia and you can see how ridiculous the traditional Celtic Wheel of the Year would be in that context — no matter which way you flip it.

When I lived in northwest Brazil for two years, I experienced living in a place that didn’t have the four seasons I was familiar with for the first time in my life.  There were only two seasons: “summer” — which was really hot — and “winter” — which was really wet.  And they weren’t even symmetrical: “summer” ran June through February and “winter” ran March through May.  Not surprisingly, Christmas was virtually non-existent (at least compared to the U.S.).  I can’t tell you how ridiculous it felt trying to celebrate Christmas around the summer solstice when the temperatures averaged in the 90s,   The big holidays were Carnival, usually in February, and the festivals of St. John the Baptist and St. Peter in June — which corresponded with the beginning and end of summer.  If I lived in Brazil, I would need a completely different Wheel of the Year and a completely different mythology to match it.

It’s not just that our Pagan holidays are anachronistic.  I think this is a symptom of a larger problem in Paganism.  Standing indoors on February 2 in the Midwest and pretending it’s spring isn’t just wishful thinking.  Every year we remark how silly it is, but we still do it.  It reflects how we have lost touch with nature — which is doubly tragic for those of us who profess to practice an earth-centered religion.

Too often, it seems to me, our Pagan rituals are escapist.  We try to impose a ideal order onto a messy nature.  Rather than going outside and touching the very real earth and breathing the very real air, we gather inside, and stand with our backs to the world, imagining Platonic elements which bear little if any connection to the real elements.  Rather than listening to the powers of the places where we live, the “gods” of here and now, we fascinate ourselves with deities from far away places and long ago times.

Too often I think our Pagan rituals are what Barbara Walker describes as a “retreat from a troublesome reality into a world of pure symbol.”  “However difficult, uncontrollable or indifferent the external universe may seem,” writes Walker, “symbolism is manipulable and so provides at least the illusion of comfort.”  The value of symbols is that we can use them to connect to the immensities of nature that may otherwise elude us.  But when we use symbols to reduce our experience to a formula, the formula can end up supplanting the experience.  Then the symbols become barriers, rather then vehicles, for connecting with nature.

So this weekend, I suggest we forget everything we have heard about Lughnasadh or Lammas.  Instead of treading that well-worn path, let’s forget about Celtic myths from long ago and the agricultural customs of 18th century English peasants.  Forget even the words “Lughnasadh” or “Lammas”.  Instead, go outside.  Look.  Listen.  Breathe in and breathe out.  Bend down and touch the earth.  And then ask what the world is telling you.  Listen for what calls to you.  Discover what needs to be celebrated, or what needs to be mourned.

And if the season still speaks to you of harvest or sacrifice or making bread, then so be it.  But if not, don’t force it.  Maybe it speaks to you of the pregnant belly of the Mama or of a consuming fire.  Maybe it speaks of passionate lovemaking or memories of sleeping under the stars.  Maybe it speaks of parched grasses or of scorching sand and the cool waves of the ocean rolling onto the beach.  Whatever calls to you, focus on that and create your own Pagan holy day.  And don’t worry about what to call it until you have figured out what it means first.  Then, once you know why your celebrating, you can find an appropriate name and, if you like, an appropriate myth.

Or maybe this weekend isn’t even the right time.  Maybe you should wait for a particularly scorching day to celebrate the thermistice, or wait for your tomatoes to ripen or your raspberry bushes to become heavy with fruit, or for some other sign from the world around you.

Emma Restall Orr writes, in Living Druidry, that the word “pagan” with a small “p” describes those who “look to the landscape, the environment, the ecology of a place, nature herself, for guidance in every aspect of their lives”, while “Pagan” with a capital “P” describes those “for whom that ancient wordless book of lore, nature, is utterly sacred,” and for whom love of nature has become our spirituality.  Thus, Orr writes, Pagans “listen more carefully, tread more softly, and celebrate with more exuberance.”  This is not everyone’s definition.  But if it resonates at all with us, then it behooves us to ask whether our high holy days reflect the Pagan spirit which Orr describes.  Are we really looking to the landscape?  Are we really listening more closely?  When we want to know the meaning of our holy days, do we look in a book or do we look to the “wordless book of nature”?

August 4, 2015 Why I Am "Still" A Pagan: the Problem and the Promise
Recent Comments
0 | Leave a Comment
Browse Our Archives
Related posts from The Allergic Pagan