I wrote this about a month back, prior to the recent SCOTUS decision. It is a bit more irrelevant now, but I thought I would post it anyway…enjoy!

This short command, which is pinnacle to the Christian faith, has been entirely overlooked by fundamentalist Christianity—and frankly, Christianity as a whole—especially with regards to the LGBT issue. The worst of these offenders is Pastor Steven Anderson, who has gone so far as to suggest all homosexuals should be put to death. My point in this article is not to talk about fringe lunatics like Pastor Anderson; rather, to bring to light the implications of this command when looking at homosexual marriage.

Although I believe the Bible does not address the phenomenon of a loving, monogamous homosexual relationship, many believe it does. My focus (this time) will not be to discuss why a literal reading of Leviticus is not a very compelling hermeneutic; nor will I talk about the Pauline “cherry-picking” that goes on with many Christians; nor whether Paul was using prosopopoeia in some of the “clobber passages” like Romans 1:26-27 (which I believe he was). I will, however, discuss why I believe using the political process to stop two consenting adults from entering into marriage is a direct violation of the command, “do to others as you would have them do to you”—unless of course the political process can then be used to stop two consenting Christians from entering into marriage.

When it comes from Christians, it is “protecting traditional family values”.

When it is directed toward Christians, it is “persecution”—and probably a sign of the “end times”.

When a Christian “votes” to not allow a homosexual marriage, they are declaring themselves over-and-above the “other”. They might as well say, “I have the authority from YHWH Himself to tell you that what you are doing is not allowed!” Is this not a form of political coercion? If so, one cannot both A) politically coerce and B) want to be politically coerced. Hence, this would violate the simple command to “do to others as you would have them do to you.”

Furthermore—and vastly more important than matters of logic—when one places themselves over and above others, they seem to be behaving contradictory to Jesus, who becomes the “suffering servant”. In Matthew 20:25-28, Jesus says to His disciples, “You know that the rulers of the Gentiles lord it over them, and their great men exercise authority over them. It is not this way among you, but whoever wishes to become great among you shall be your servant, and whoever wishes to be first among you shall be your slave; just as the Son of Man did not come to be served, but to serve, and to give His life a ransom for many.” In this passage, Jesus invites His disciples to imitate Him in serving—putting others ahead of themselves. How can Christians be called to serve all, while at the same time using the political process to interfere with thousands of loving couples (even if they think it is ‘icky’)? How can a follower of Jesus place him or herself over and above anyone; for any reason?

I cannot help but cringe when I hear the justifications for stopping the oft-used pejorative, “homosexual agenda”. All-too-often, “protecting the sanctity of marriage” seems more important than living “at peace with all men” (Rom. 12:18)—“voting for God” more important than being “last of all and servant of all.” (Mark 9:35) I do not think all the Christian gentlemen with a profile at XXXchurch.com really want to start enacting morality-based laws, rules, and regulations. And I am not casting stones for I’m no angel.

If the bible makes anything clear, it is that we are called to love—called to serve others as Christ loved and served. Those who take a Christocentric worldview will not wage war with the LGBT community. Rather, we will follow Jesus and treat all with love, kindness, and compassion—just as we want to be treated.

It is the golden rule after all. 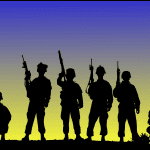 June 29, 2015 A quick thought from last night's "night-night" time...
Recent Comments
0 | Leave a Comment
Browse Our Archives
get the latest from
All Set Free
Sign up for our newsletter
POPULAR AT PATHEOS Progressive Christian
1