About Burgers and Boycotts: BurgerIM 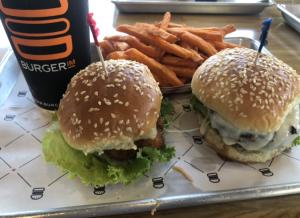 There has been a lot of controversy recently about the BurgerIM franchise, since the original concept and brand was created in Israel and then brought over to the US a few years ago. Not only that but many Muslims became franchisee owners since they offered Halal Meat options at their restaurants. Some Muslim Activists have called for a boycott of the company, due to their belief that the original brand was created in Israel and the person who bought the rights and brought it to the United States considers himself an Israeli, thus according to certain activists he must be a “Zionist” – or one who believes in the creation of the State of Israel, no matter the cost, even to the detriment of the native Palestinian people.

But here are some facts:

As recently exposed in a Restaurant Business online article, the previous CEO of the BurgerIM brand, Oren Loni, created a company based in Southern California called Burgerim Group USA. Due to Loni’s mismanagement of the business, he never collected any royalty fees since he started the business in 2014 and the business came to the brink of bankruptcy.

The company, under Loni, has been the subject of 20 claims of unpaid wages since 2016. According to the article mentioned above, the BurgerIM company finished 2018 with only $50,000 of cash on hand! Currently the company is facing 40 to 50 different lawsuits.

Oren Loni recently sold the company to another businessman in the United States and he has left the country “due to outstanding debts.” Some people think he left back to Israel, but according to the article, Loni also has legal issues in Israel for similar bad business practices and other lawsuits against him, and he was asked Not to leave Israel, but this was before he brought the BurgerIM brand to the United States, so most likely he is not in Israel either.

In short, there were no way for Loni to funnel any funds from the BurgerIM company from royalties to “support the State of Israel and persecute Palestinians,” as some critics say, because he never collected any royalties and had no funds to do so!

Here in the Bay Area there are several BurgerIM restaurants which are currently operating.  Three of them are known to be Halal and they are owned by a local Muslim family in the East Bay. Abdul, an Afghan-American and practicing Muslim, is the franchisee owner of the 3 Halal locations in Pleasanton, Fremont and Pleasant Hill has told myself and others in the community that he also has not paid any royalties to the previous CEO Loni, and according to his Franchise agreement, the BurgerIM company is based in the United States and there is nothing in those legal documents which connects the US based company to the state of Israel in anyway.

In summary, besides the ethnic and cultural background of the previous CEO and owner, Oren Loni being originally from Israel, there seems to be no other connection, whether financial or otherwise, of the Southern California based Burgerim Group USA company to the State of Israel. In short if they don’t have money to pay their own employees and are not collecting royalties from their current franchisees, how are they then going to “fund and support” Zionism?  Just because he may be Jewish?  That seems kinda Anti-Semitic to me!  Muslims always complain about Islamophobia, which is definitely real, but if we start using the same tactics that those who hate Muslims, against other groups, whether Jewish or otherwise, then how does that make us any better than those people who claim Muslims are evil or bad just because of where we may have originally come from?

Is a person from Syria who starts a business in the United States, automatically considered a supporter of Assad, just because he came from Syria?  Or is an Indian business owner, who is not Muslim, automatically considered a supporter of the Modi government who is oppressing Muslims in Kashmir? India has been occupying Kashmir for over 70 years, about the same amount of time as Israel has been occupying Palestine.  So why don’t we boycott all Indian businesses and products then?

In my opinion, we as Muslims should use our intelligence and brains.  Instead of making emotional decisions such as calling for a boycott of a brand that was started by an Israeli just because we believe they are profiting off the “blood” of Palestinians! By boycotting a Muslim owned business, which not only employs Muslims, but also works with Muslim vendors and Halal meat suppliers here in the United States, we are only hurting ourselves and our own community! Muslims need to support fellow businesses, especially if they are providing Halal food to the community.  And who knows, perhaps if current Muslim franchisee owners of BurgerIM get enough support from their own Muslim community, they can work together and take over the brand, thus creating something new which is completely Muslim owned! Muslims need to start thinking outside of the box and have some vision.  Instead of being short-sighted, making false claims against a company or business, and slandering the Muslim owners or franchisees, we should be supporting each other and lifting each other up!  Being supportive of each other will have much more positive impact today and in the future for the Muslim community.  Attacking each other will only keep us down and not allow us to grow and develop in American society.

For those who are interested to learn more you can listen to our interview with the Bay Area Muslim Franchisee owner, Abdul on the HalalEats podcast here.

P.S. For those wondering about the BDS (Boycott, Divestment and Sanctions) movement, according to their leadership, BurgerIM is NOT included in any official boycott of BDS.

July 3, 2020 A Rewarding Role: The Best Careers for Helping Others
Recent Comments
0 | Leave a Comment
Browse Our Archives
get the latest from
Al Mihrab
Sign up for our newsletter
POPULAR AT PATHEOS Muslim
1