Shaima Al-Awadi – Beyond Hoodies and Hijabs 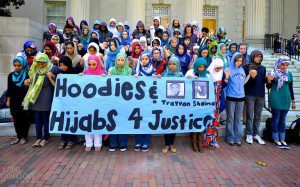 The perplexing circumstances surrounding the brutal murder of a young mother, Shaima Alawadi, has had the Muslim American community abuzz recently. As her daughter purportedly found Alawadi’s body with a note stating, “go back to your country, you terrorist,” many rushed to label the incident as a ‘hate crime,’ even attempting to demonstrate a link between her death and that of Trayvon Martin, the 17 year old shot by neighborhood watchman, George Zimmerman.

Those attempting to link both cases claim both deaths were the result of racial or religious bigotry and point to the historical “culture of fear” surrounding African American men in this country that may have impacted Zimmerman’s attitudes and actions towards Martin. Since we also have a developing culture of fear surrounding Middle Eastern American and Muslim men it seems logical to these commentators to assume that Alawadi’s death was the result of someone else’s bigoted attitude towards Muslims.

Though the evidence for the culture of fear surrounding African American and Middle Eastern American men is well documented, attempting to exemplify this theory through linking these cases is potentially faulty on two counts – 1) it neglects to take into consideration Zimmerman’s history of violence as an indicator that he probably would have acted as he did regardless of Martin’s race, and 2) it neglects to take into consideration the questionable nature of Alawadi’s daughter’s claims and actions, as well as the increasingly likely possibility that Alawadi’s death was the result of a familial dispute.

The latter has turned into a major point of contention for the American Muslim community. If we acknowledge the likely possibility that Alawadi’s death was part of a familial dispute does that mean our valid claims of anti-Muslim attacks or hate crimes will not be taken seriously? And moreover, will we be expected, once again, to accept communal responsibility for a person committing violence who happens to share our faith?

The fact is, more than a third of American women murdered each year are killed by a person known intimately. This is regardless of race, ethnicity or religion. According to several governmental and organizational studies these numbers increase, however, to over fifty percent when we examine cases of immigrant women murdered.

On the other hand, according to an FBI report released last year, crimes of anti-Muslim bias account for about 13% of all religiously biased hate crimes. Furthermore, the Council on American Islamic Relations reports that in 2009, under 6% of its total complaints were allegations of verbal and physical threat or violence.

This means that even if we were to double the numbers for Islamophobic violence against Muslims, to account for the cases that may have gone unreported or been misclassified, statistically a Muslim woman of an immigrant family in the United States is more likely to be killed by a member of her family than to be attacked by a stranger for being Muslim.

This is not to correlate such a possibility to her religious beliefs or even to her being an immigrant, as violence on the domestic front can be due to a host of socioeconomic factors, cultural gender expectations, educational and language barriers, or even arbitrary familial disputes. This is not even to claim that such statistics prove that Alawadi’s death was definitively due to a member of her family. But it is to point out there are legitimate alternative possibilities that are more plausible than a random hate crime, so the question arises – why are we solely focused on proving a statistical anomaly, especially when there is increasing case evidence pointing to the contrary? And how will we, as a community, address alternative outcomes?

Larry Wilmore of The Daily Show facetiously pointed out in regards to the controversy surrounding Martin’s death, “Since the court of public opinion is the only one who would take [the case], everyone feels the need to jump in and condemn or defend George Zimmerman. To some, he was a victim of the media, to others, “Elmer Fudd hunting down black people — Somehow the death of a 17 year old got turned into a chance to score ideological points.”

We are doing the same with Alawadi. And we are doing a disservice to both.

Alawadi’s death hit home for a lot of Muslim Americans. The possibility of her death being the result of hatred towards our shared faith represents our worst fear. And in the current political climate of “anti-Shariah” legislations and governmental surveillance programs targeting Muslim communities it is no surprise that so many are on edge. But we need to move beyond catchy campaigns about “hoodies and hijabs” in order to discuss the racial and religious tensions that exist in our country in an appropriate context. There is no shortage of cases to direct those discussions. Exploiting a woman’s death, however, trying to prove a point with only selective evidence is self-defeating.

We need to be prepared to seek justice for Alawadi and Martin regardless of the circumstances surrounding their deaths. With Martin we know the killer and can demand justice be served in accordance with the law. But I fear that with Alawadi, if the theoretical ‘hate crime’ link between her and Martin cannot be maintained she will become just another woman, another statistic abandoned by the Muslim American civil-rights community.

The opinions expressed in this commentary are solely those of Nadia S. Mohammad. Nadia is a graduate of Loyola University Chicago School of Law and is an Associate Editor for AltMuslimah. This essay originally appeared on Altmuslimah. 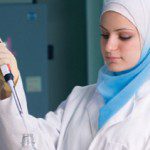 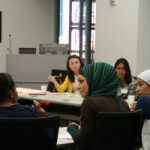 April 19, 2012 The Typecast Muslim Professional
Recent Comments
0 | Leave a Comment
Browse Our Archives
get the latest from
Muslim
Sign up for our newsletter
POPULAR AT PATHEOS Muslim
1