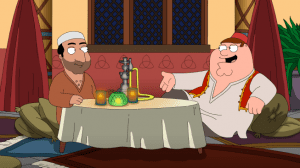 By A. David Lewis

The Family Guy episode entitled “Turban Cowboy,” which aired Sunday, March 17 on FOX, had Peter becoming Muslim less as a plot line and more so as a gimmick. His latest near-death experience left Peter looking for more in his life: While recovering in the hospital from a flagpole through his buttocks (yes, you read that right), he was befriended by fellow patient Mahmood, who introduced him to Islam.

That’s all the set-up that professional provocateur and show creator Seth MacFarlane needed to pummel audiences for the next 20 minutes with a barrage of easy stereotypes, particularly Muslim men as subordinating women and secretly being terrorists.

As a convert to Islam, the sort that plays Angry Pigs, likes cool ninjas and remembers Harrison Ford’s Air Force One (all referenced by the show), I’m far less offended by “Turban Cowboy” than I am disappointed: It was lazy. When Islam was first broached in the episode, the jokes were actually promising: Peter finds Mahmood’s hat menacing, Monopoly players might “go directly to jail and convert to Islam,” and the Islamic version of Looney Tunes finds Porky Pig far, f-f-far less appealing. Ok, good – all jokes I that hadn’t heard before, that don’t have much venom to them and that stretch from American popular culture, which is MacFarlane’s bread-and-butter, over to perceptions of the religion.

From there, though, MacFarlane and staff pick only the easy, low-hanging  fruit, mostly the rotten dates.

Keeping in mind that “Turban Cowboy” featured gags about gays, vehicular homicide to win the Boston Marathon, and paraplegic fart jokes — and did I mention the flagpole impaling Peter’s butt? — what else should audiences expect from the show other than its Family Guy brand of “boundary-pushing” comedy that foregrounds stereotypes?

The shock-is-humor equation kept the formula the same while plugging in new variables: Muslims aren’t hygienic, Muslims eat weird food, Muslims are prudes, etc. It becomes so predictable that even the disclaimer by Peter’s friend Joe that Muslims are just as violent as some Christians (thanks for the faint praise) felt forced. By the time it was revealed that Peter’s new friends were planning to detonate a bomb remotely, it was plain that the trigger wasn’t the only thing being phoned in.

The responses on Twitter were telling. That is, postings ranged the gamut from this being the best and most daring episode of Family Guy in some time to the show being indefensibly Islamophobic. Several noted either that Family Guy had treated other religions far more harshly or that the show’s rage against the treatment of women was not fiery enough.

Frankly, the tweet that gave me the biggest wry smile was the one stating, “It’s official. @SethMacFarlane has the biggest kahones of all.” As Peter said in the episode, of the many reasons America is great, one is that Twitter allows us to spell there any way people like — and the same seems to hold true for Spanish loanword cahones. Sadly, Family Guy’s insights into Twitter did not match its care with (or for) Islam.

Worse than being lazy, though, “Turban Cowboy” was pointless. There are funny things to be said about Islam, and there are contradictions and ambiguities that could be worth tapping for comedy gold. (I’ll give credit where credit is due: The sole stand-out, throw-away line of the night, as heretical as it may have been, was Peter saying OMA instead of OMG, acronym humor — you know, Oh My Allah.) Conversely, there are a number of issues for which global Islam could’ve been fairly criticized and American culture should’ve been taken to task, or both. “Turban Cowboy” was a squandered opportunity — for legendary television yucks or a compelling mass-media message.

Whether or not Family Guy “took it too far” is irrelevant. The fact is, really, it didn’t take it anywhere.

A. David Lewis, Ph.D. is a religious studies scholar and authority on religion and popular culture. He is the co-editor of Graven Images: Religion in Comic Books & Graphic Novels as well as a national lecturer, Boston-based college educator, and writer.

March 29, 2013
The 'Gay-Muslim' Phenomenon - Why Islam Considers Homosexuality a Sin
Next Post

April 10, 2013 In the War of the Billboards, Islamophobe Pamela Gellar is Winning
Recent Comments
0 | Leave a Comment
"Thanks for sharing informative blog with us regarding the halal meat revolution."
Boxed Halal Sustainability: The eco-halal revolution
"Salam. I am going to be blunt and honest with you. Girls who are doctors, ..."
Rubina Ahmed Looking for Love and Finding Awkwardness ..."
"FsyYOU are hate. Period."
Soren A Ramadan Testimonial of Repentance and ..."
"Thank you for sharing this article along with detail information, and you have mention the ..."
wazeer shaik The Path Through Hajj – One ..."
Browse Our Archives
Related posts from altmuslim